WE DENIZENS by JEN COLEMAN 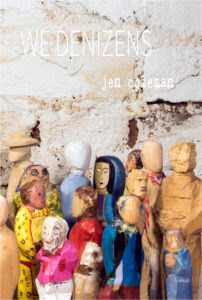 INFANT SQUID BEING IN THE WORLD

Back in September I was reading the new book We Denizens by Jen Coleman and encountered these lines:

infant squid swallow a million times themselves
in water and let again that water out, each a self-
propelled arrow among arrows finding direction
one from another in so much dark.

which is totally startling and beautiful, and the odd inversion “and let again that water out” adds a Miltonic cadence that makes an infant squid leviathan, and that linebreak self- into -propelled arrow is like a turning inside-out of effect into cause, and then the next line is:

Look closely: everything has scatters.

And these scatters of Heraclitean fire are set up as sea life quickening in the preceding sentence:

In a way, here, under the moon
thinned and scattered by water, drifted life
is not helpless but migrating from deep, rising
adrift with their own power.

so the whole thing is set within a cosmos, and a plurality of organisms emerges from undifferentiated unity (drifted life) by a grammatical sleight where the pronoun their corresponds to the verb is. So I copied the whole passage from the poem “On Desire” into my notebook, with I assume a broad look of “Wow!” on my face. 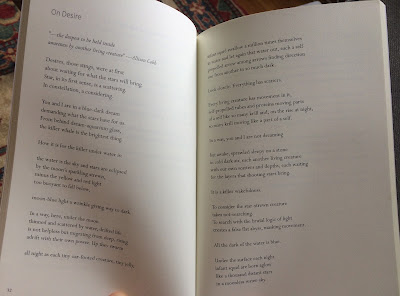 But I wasn’t ready to think about desire. In the days before this I had been preoccupied by an email correspondence with a writer I idolize, Bruce Boone, and we seemed to be at an impasse over what he had meant, in a draft essay on translation, by the need for hierarchy, its importance to any writer or translator. This troubled me since I tend to idealize lateral or chaotically churning relations. I had settled, maybe willfully, after some discussion with Bruce, on the idea that this was his ex-Catholic way of saying that a writer or translator needs the discipline to be immersed in a cosmos, an image (in almost the Hermetic imago mundi sense) of being in the world. And that such an image would situate the writing within a logic of location and relation carrying the kind of clear spiritual authority Bruce himself carries, which allowed him to say this shocking thing. (And maybe, with my crude habit of sorting, I was including Bruce with two other great heterodox pantheist Catholic gay writers, José Lezama Lima and Robin Blaser, each of whose poetries made explicit the struggle to know a cosmic image.)

At Bruce’s insistence I was reading Pierre Hadot’s book on Plotinus, and I’d recently copied out this passage of Plotinus on contemplation of the world-image:

Let us imagine that we see the whole earth…and the sea, and all divine [but I wrote diving!] beings, as if in a transparent sphere, in which it really would be possible to see everything. Let us keep within our soul the luminous representation of this sphere, containing everything within itself… Keep this image within yourself, and eliminate its mass; then eliminate the presentation you have within you of its spatial extension and its matter.

The last command seemed to require an imaginative or pneumatic discipline I’ll never possess, but I liked the image. And around the same time I was reading Renee Gladman’s Calamities and found the passage where she says she realized one of her students—but she did not know which one—was “the person in the world” about whom she’d been thinking only in the abstract for so long, and asks: “How did one draw out the person who is the most perplexed of all persons?” And this too was a revelation, that the need for a world implied a person who was, though anonymous, particular, actual, and waiting to be drawn out. Maybe I was understanding Bruce’s notion of the spiritual hierarchy of translation—anyway I felt dizzy.

So when I copied down this passage of Jen’s poem I was thinking of what it takes to exist consciously in a world, as an individual barely differentiated from a swarm, in an imaginative structure of perfect transparency and compactness that could only be totally confusing, unknowably dense, mobile and entangled. After writing out the lines I stared into space. Then I wrote below them: “INFANT SQUID BEING IN THE WORLD.” This seemed to solve something. I seemed to know what I should do next. I should write about, and try to embody, infant squid being in the world. Picturing the world had been a deadlocked obsession with me for a long time, but this motivating image from Jen of infant squid being pushed the whole relation into specific, livable, slippery actuality, a story where creatures were forces that became not just intertranspicuous (Percy Shelley’s word) but interinanimating (Fred Moten’s word).

I was also learning from the way my daughter Ceci says world to mean simply place and sometimes describes the movements of her imaginary friend Copb from “Copb’s world” to “your-guys’ world.” But she knows the word place and the two aren’t quite synonyms for her. She gets world accurately: place as knowable cosmos. It seemed if I learned how to infant squid be in the world it would be a big deal, maybe the big step from anxiety into beauty or full participation in things. But so much was happening just then, the beginning of the school year for the whole family, and at the end of September my grandmother died. So the phrase has just been sitting there, waiting for me in the other notebook, until today, November 3, 2016. And next week of course the world will end.

Why can’t I understand the cosmic hierarchies?

Why does every theory of translation make me want to dethrone the angels?

What about speaking with tardigrades, in loving solidarity, as imagined by Jen Coleman (in the poem “Micro Animals”)?

How would it look if I tried to draw a graph of what immersion, submission, scatter, migration, and drift are doing here?

Have you ever seen how a basket star feeds itself?

As Bruce asked, how much is this really about the death of my grandmother? Well, she taught me more than anyone about contemplation, and was the first poet I ever met.

How do I fit into all this? Do I appear here as the straight man, in one or two senses? As reader and student I’m perhaps passive, perhaps submissive, at the same time that I’ve arranged, however haphazardly, the whole thing.

And where, in all this, are “Fear and Fury”? (The title of the consummate crown of sonnets at the center of We Denizens, structured by around contradiction and transposition with the help of a brilliant tonal equanimity like Willie Nelson by way of Gerard Manley Hopkins reading feral hope between the lines of each day’s apocalyptic news, bedenizened with owls, worms, bobcats, skunks, hunters, cowboys, astronauts, lovers, squirrels and dogs, about which I can only say, read it!)

Sam Lohmann is a poet and librarian in Portland, Oregon. His books include Day Use Area (Couch Press, 2014), Unless As Stone Is (eth press, 2014), and Stand on this picnic bench and look north (Publication Studio, 2011). Adventitious essays can be found at thefirmandaerie.tumblr.com.