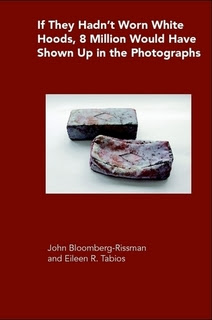 If They Hadn’t Worn White Hoods, 8 Million Would Have Shown Up in the Photographs by John Bloomberg-Rissman and Eileen R. Tabios
(Moria Books’ Locofo Chaps, Chicago, 2017)

Ah, “President” Trump. I knew it wouldn’t take long for your frat-boy shenanigans and your complete lack of taste, tact, and skill to show up as comedic cannon fodder for the poets, artists, and stand-ups of the day. What did catch me off guard, however, is the vitriolic fury that was the impetus for such scathing social commentaries. It seems that people have finally decided that the easiest way to dethrone a fascist is to hit back with all the power and aggression of a Soviet tank rolling through Kursk in August of 1943.
This volume is a part of that very canon of literature, although to say that similar works do not exist are incorrect. Seth Grahame-Smith wrote a volume for Quirk Books in 2008 entitled Pardon My President: Fold-and-Mail Apologies for 8 Years which used a similar motif, although, to be fair, the letters were for meant for the reader to tear and send, as opposed to the line-items contained in this chap, which are written to be initialed by the President himself. 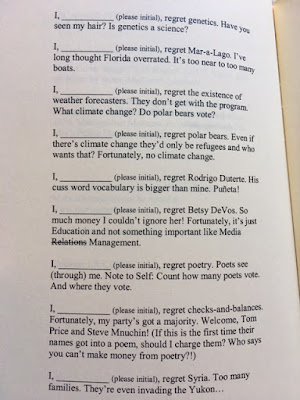 While many of these are your standard-palate Trump insult (“… regret that whoever is compiling these regrets is making it seem as if I’m capable of speaking in complete sentences.”), other sections delve deep into the horrific flaws in the Trump administration. His desire to destroy education (“…regret Betsy DeVos. So much money I couldn’t ignore her! Fortunately, it’s just Education and not something important like Media Relations Management.”), equality (“… do not in the least regret having my people handcuff that 5-year-old Muslim boy at the airport, but I do regret that we haven’t handcuffed any Muslim fetuses yet, No one’s too young to be a terrorist!) and even the very fabric that governs us (“…regret that the US has a Congress and a judiciary. What a waste! Terrible! Stupid!") are all attacked with the type of biting satire that legends such as George Carlin and Anthony Jeselnik pioneered.
That’s not to say that the book isn’t self-aware. It seems that the authors, for example, manage to check their unbridled hate when, after a dig at Mitch McConnell’s jowls, they take a step back and self-crit with the line “…regret bodyshaming. I looked in a mirror…” It’s refreshing to see that the Revolution will be able to see its shortcomings and adjust accordingly.
All in all, this is a humorous take on the Trump administration’s use of executive orders, most of which accomplish nothing and pander to extremists. Unlike Trump’s scrawl, this book will play a role, albeit it a small one (after all, it’s a chapbook, not Das Kapital) in pushing for real reform.