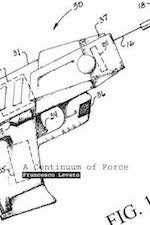 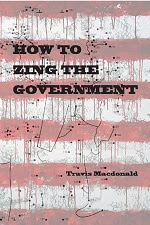 How to Zing the Government by Travis Macdonald
(Moria Books’s Locofo Chaps, Chicago, 2017)

Donald Trump erases a lot of things. Sometimes he deletes tweets when they contain misspelled words. His administration erased the word “science” from the EPA’s mission statement. They’ve deleted datasets and webpages regarding the Arctic climate. They’ve erased references to LGBTQ people from federal websites, and erased questions regarding LGBTQ people from the HHS survey on older and disabled Americans. They’ve restricted travel; they’re building walls. These erasures are dangerous. They regulate and restrict language, they alter how we perceive the world, and they cause real-world damage against those they erase.

However, erasure can also be a powerful poetic form. Erasure poems utilize found text, and through erasing or blacking out portions of that text, leave behind something new. In erasures, words on the page often take a sculptural or architectural turn: source text is viewed as a kind of readymade, a raw material to be manipulated.

Erasures can take on different looks, and the visual component is fundamental to the form. In this way, erasures work on not only the poetic-textual level, but on a poetic-visual level as well. Literal erasures actually do erase the original text. (Think of Robert Rauschenberg's artwork "Erased de Kooning.") Sometimes these poems maintain the empty spaces left behind, leaving the remaining words floating around the page. Sometimes such erasures drop the spaces altogether, allowing the author to mimic more “traditional” poetic shapes using their own line breaks, enjambment, and punctuation.

More common, I think, is "blackout" poetry, where rather than literally erase lines of text, the author covers them with black lines. Words that are not covered form the new poem. Pages look dense, thick with what has been removed. Erasures of this kind achieve the look of heavily redacted government documents. (Recall artworks like Jenny Holzer's "Redaction Paintings" or Steve McQueen' "End Credits," both of which make use of redacted government files.)

Two recent releases from the Locofo chapbook series (an imprint of Moria Books) make use of the erasure form: A Continuum of Force by Francesco Levato and How to Zing the Government by Travis Macdonald. The Locofo chapbook series has produced 100 chapbooks of protest poetry to correspond with the first 100 days of the Trump administration. Each chapbook has been mailed individually to the White House.

For these two chapbooks, erasure gives form to their protest. Both authors chose texts that are political and public as their source texts. A Continuum of Force uses the U.S. Customs and Border Protection's "Use of Force Policy, Guidelines and Procedures Handbook," while How to Zing the Government uses The 9/11 Commission Report.

Although I consider both chapbooks to fall into the category of erasure, neither actually erases or obscures the source text. Both chapbooks maintain a significant degree of integrity regarding their source texts, and this integrity serves to heighten the element of conversation between source and poem. Given their political nature, this conversation feels necessary; we remain grounded in the real-world exigencies of the source text while simultaneously allowed to imagine another world via the poems.

The erasure poems of A Continuum of Force reduces its source text to its barest bones, and in doing so it reveals and redefines the meaning of that text. Take, for instance this page:
(click on all images to enlarge) 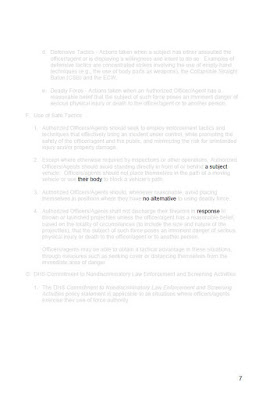 The design of the page is fitting: the layout is efficient, stark, direct. The poems themselves are composed of little more than bodies, weapons, and the application of those weapons to those bodies. Levato's poems distill the government’s handbook - filled with procedural, technical, and legal jargon - into something more immediate, more candid.

The erasures in A Continuum of Force often leave behind a catalogue of violence, but in doing they also leave behind acts of redefinition. 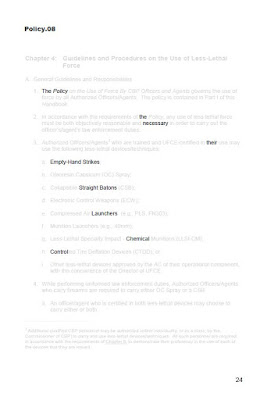 The Policy is no longer a set of rules and guidelines. It has been redefined not as language, but as object – violent, threatening, and physical. Through erasure, “the Policy” has been sifted to its finest definition, the cleanest, most stark representation – “control.”

This sifting is the magic of erasure; Levato allows us to re-see what was always already before our eyes. A Continuum of Force forges rich and brutal poetry from its source text, sparse but full of impact, with lines as sudden and decisive as the flashes of violence they describe.

While erasures are sometimes about guiding the reader into a new reading of a text (as Levato's does), Macdonald's work in How to Zing the Government is about challenging and pushing the reader's skill of discernment.

Macdonald concerns the reader with appearances. Black and white are reversed on the page. The act of "erasure" is achieved by highlighting, rendering text back to "normal," that is, black text on white. 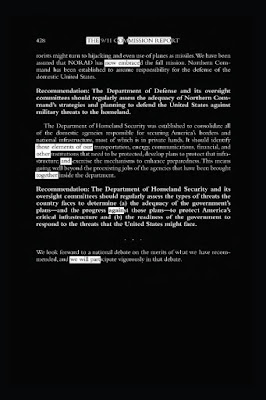 How to Zing the Government bears marks of its source text, and this relative legibility forces the reader into a more active role. The repetition of page numbers and book/chapter titles printed at the top of each page, for instance, bear witness to the text's original formatting. Interestingly, these traces of the source text actually obscure the format of the erasures – does each page constitute a new poem following the repeated title? Are those titles ignored, as one does when reading the source text? Or do the repeated titles merge into the poem/s themselves? 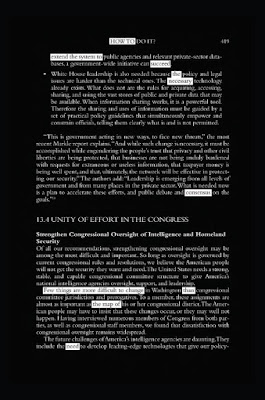 The erasures of How to Zing the Government read like instructions for filing government paperwork while on an acid trip; a how-to guide for an alternate reality; a deranged, poetic, and beautiful manifesto. Its phrasing is reminiscent of aphorisms or fortune cookies, but severely askew and always directing the reader to take part in this tilted and thought-provoking upheaval. Macdonald has excised the mundane, leaving nothing but revolution on the page.

As part of the Locofo chapbook series, both chapbooks have been mailed to the White House. While it is doubtful they will ever reach the (tiny) hands of Donald Trump, the act of sending these protest poems (indeed, all 100 chapbooks are being sent) provides at the very least a sense of doing, a cathartic something. The poets have transformed feelings of helplessness, grief, and rage into art.

We often enter poetry through metaphor: describing this by way of that. What erasure poets like Levato and Macdonald accomplish is to literalize the act of metaphor: they transform that text into this text. Poetic erasure is not merely a way to eradicate or scrub away the original text; instead, their erasures are a means to make the language speak in a different register. One text changes into another. Words are left on the page like debris after a storm. The page becomes an interstitial space, a fine network of revision, a rhizomatic redeployment of language.

Poetic erasure is less about annihilation and more about transformation. In these two chapbooks, language covers and recovers meaning. Erasure offers these authors a means to not merely speak back to authority, but to enter and occupy the language of authority, to re-organize and re-distribute their words.

The Trump administration continues on with its course of violent, deleterious erasure of difference and diversity. At the same time, poets and writers lend their voices to protest and resistance, and works like A Continuum of Force and How to Zing the Government speak to these times. These chapbooks, and the Locofo chapbook series in general, provide a vital and creative response to an administration that is plowing recklessly ahead.

Levato's redefining of policies and MacDonald's alternative how-to guides offer creative ways to manifest their protest. Their erasures enact the kind of resistance that encompasses simultaneous acts of destruction and creation – they pull down the source text, and in the same act, build up their new poems. This is how the world changes, and this is the kind of energy we need more of in contemporary poetry.

Andrew Rihn is the co-author of the Locofo Series chapbook The Marriage of Heaven and Hell; An Election Cycle, which he wrote with his wife, the writer Donora A. Rihn. Their chapbook contains one erasure poem, a blackout of the R.E.M. song "It's the End of the World As We Know It (And I Feel Fine.)" Together with their two dogs, they live in a tiny house in the Portage Lakes region of Ohio.