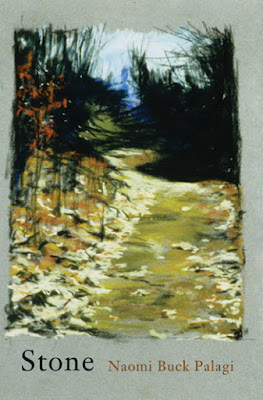 Naomi Buck Palagi offers adept poems that play off, while admirably widening the expanse, of the theme indicated by the book’s title: Stone. Poems touch on the expected, such as a poem entitled “the island,” but also offers the unexpected like the play of colors in “sandskin” that begins

the colors play
across her face

the liquid
before the sandstone stills;

desert palette from which
she made her choices, the rivulets

down which dry streams fun flush
twice a year.

to touch
a sister’s skin

is too much
at a moment.

The pleasingly unexpected approach in many of the poems is one of the collection’s strengths. It can be found in Stone with a wall that stopped a blind girl in “Traveling,” keeps safe the same blind girl in “Keeping Safe,” but also angers the girl for its constraints in “Staying.”  The structure of positioning the poems related to the blind girl throughout the book (instead of, say, as a stand-alone series) works effectively for offering a parallel layer to the readings of individual poems—it’s a structure that helps keep the reader’s interest from the beginning to end of the book.

What blurber Kristina Marie Darling calls “inner life” is another strength in these well-developed poems, e.g. “out”— 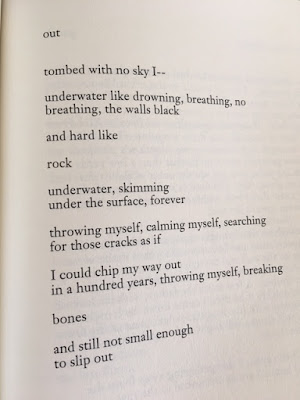 Having enjoyed an immensely satisfying read in one sitting, I return to its first two poems which also offer an unexpected gift: a fresh way to structure/create a poetry collection.  Here are the first two poems, "stonework" and "stumbling height": 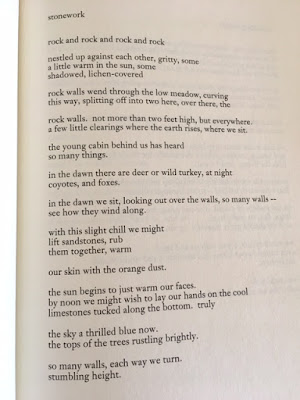 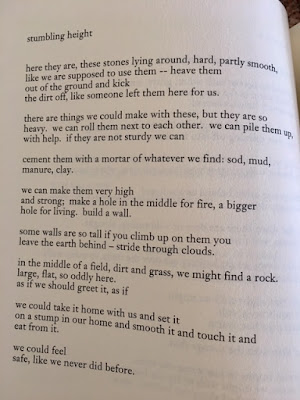 As you can see from the above, the structure to which I refer is a poetry collection where, starting with the second poem of a collection, the title of each subsequent poem happens to be the last line in the prior poem.  Palagi only did it—perhaps it’s a coincidence?—in the first two poems but to continue said structure throughout an entire poetry collection may be interesting.  I may explore it myself—and for this effect that’s possible to me as not just a reader but another poet, I also thank Palagi.