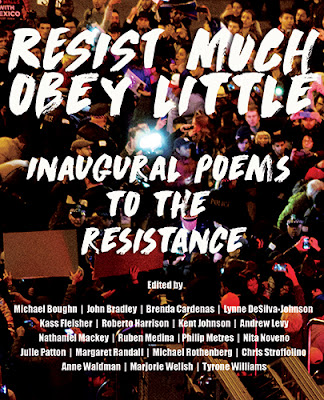 It seems incredible that this very thick book, here in its finished form, was conceived, solicited, selected, assembled, edited, and designed in little more than two months. Between the conception of the idea on the surreal morning of November 10th, 2016, and our sending of the volume to press a short fortnight after Donald Trump’s Inauguration, twenty editors of diverse background somehow managed, in emergency mode, to rally more than 350 poets from various countries into nearly 740 pages.

That emergency mode was triggered, of course, by a brute and very “non-alternative” fact, one which masses of people around the globe are still struggling to fathom: that a racist, misogynist, bullying charlatan has succeeded in snake-oiling his way to supreme power by manipulating the fears and despairs of a substantial minority of the American electorate. As we write this, barely two weeks after the Inauguration, his bizarre Cabinet nominees seem cast for something like a new Reality TV Doomsday series. His personal Oval Office advisors, whose appointments don’t require approval by anyone, appear even more unnerving: smugly reactionary in their ideology; candid fans of current neo-fascist movements in Europe; and with a third-column crush, like their boss, on a crime-linked tyrant in Moscow with whom they very possibly colluded during the campaign. Already, the new Administration is rattling WMD sabers at China and Iran, endorsing the use of torture, tearing up climate-protection policies, stating its intent to deport vast numbers of minimum-wage working people and their families, preparing to cancel nuclear arms agreements, blocking people of Muslim countries from entering the U.S., abusing dissenting judges, launching plans for a 1000- mile-long “beautiful” Wall, and threatening a Middle East meltdown with plans to move the U.S. Embassy in Israel to Jerusalem. From all appearances, this is only the opening salvo in a scorched-earth war against most social and economic progress since the days of the New Deal. And against who knows what else, or with what horrific perils.

We can hear some people asking: What purpose, for goodness’ sake, could poetry possibly have in face of such an extraordinary and patently dangerous situation? What would the point of an anthology like this be, beyond providing its contributors a self-satisfied feeling they have registered their outraged, paper-bound dissent? What relation would a collection like this have to the duties and tasks of citizens at large in the coming four years or more, vis-à-vis the new political reality and the mounting call for sustained resistance?

Excellent questions all. And the last thing we want to do is pretend that they can be answered with any real certainty. On the contrary, we say: within the unprecedented current conjuncture, the posing of queries and problems themselves is the pressing and vital point. Confident solutions, for sure, are not that favorable to poetry’s drive and spirit (or to those of any art, for that matter). In that sense, it’s probably high time to shelve Percy Bysshe Shelley’s quaintly heroic adage that “Poets are the unacknowledged legislators of the world.” Or to at least dispense with its casual interpretation. For poets, the record plainly shows, have no more insight about most things than anyone else does. Nor are poets necessarily any more moral or less hypocritical than politicians, architects, cab drivers, nurses, or construction workers on the forthcoming Keystone and Dakota Oil Pipelines.

That said, W.H. Auden wasn’t necessarily spot-on, either, in his own famous adage that “Poetry makes nothing happen.” True, in the United States these days, poetry is a marginal activity (self-proudly so), its products largely read only by poets themselves (albeit a fair number of people, to be sure). And there can be little doubt the professionalized lodgings of a large segment of America’s poets in the literary suburbs of Academia over the past decades has only deepened the genre’s isolation. But it would be a mistake to think this is the natural state of the art: world history shows, and in fairly recent times (not least in the nations to our south), that poetry, sometimes with surprising force and velocity, can have new and unsuspected impacts, especially in times of cultural upheaval. In Nicaragua, for instance, in the revolution against the Somoza dictatorship, it proved centripetal. In Chile, within the struggle against the Pinochet regime, avant-garde poetic shock actions had remarkable resonance. Plenty more examples are to hand.

Even in the United States, poetry’s current social and popular marginality is relatively new. In the 19th century, and up until the first decades of the 20th, for instance, verse had a mass readership, and one hardly needed a college degree to engage it seriously, or to be able to recite it from memory. Not long later, in the 1950s and 60s, a new poetics arose outside the highbrow precincts of University English Departments, then dominated by a narrowminded formalist clique. This insurgency rapidly became a force within the emerging counter-culture, proving to have deep and extended impacts on the mass culture at large (think of the Beats, for example). Shortly thereafter, the movement against the Vietnam War spawned a rich upsurge of political literature, with poets regularly taking the stage at mass marches, their books selling in the many thousands, their poems mimeographed without heed of copyright and passed from hand to hand. And the bardic impulse of social lyric during that period joined song, linking poetry back with its ancient roots (think of Dylan, Baez, Seeger, others). More recently, the widespread Slam movement and numerous artists within vanguard formations of hip-hop have been pushing--and to stunning effect--poetic recitation into protest and social activism. These “popular” forms of lyric expression will no doubt flourish in the next years and bring forth new developments in radical content and prosodic means.

There is good reason, therefore, to believe that poetic practice, across the formal spectrum, may take on new dimensions of activist vision in the coming years. Not only in modes, forms, and language proper, but in the ways that poets come to see their roles within a generalized cultural defiance: coming to see their praxis, that is, as more complex and fluid than traditional composition alone, pushing the nature of poetic vocation into collective measures of performance and action that move beyond the printed page. No one can now confidently predict what paths of expression and commitment poetry will take in the coming years, any more than one can confidently predict what fate awaits our increasingly fragile planet as a whole. But there are many, many thousands of practicing writers in the United States, spanning the banded red-shift of aesthetic loyalties, and in their numbers and intellectual energies, they constitute a potential force in their own right. Their resistance will be registered in the embattled commons, and not just in journals, personal collections, or anthologies like this one.

This book, then, is not intended as an offering of unique, sophisticated “creative writing.” It is, first and foremost, a collective, insurgent call that is part and parcel of a sovereign people’s challenge to a narcissistic oligarch and his lackeys, who smirk now from their temporary perches of power. Its pages are bound in direct, literal ways, to the historic worldwide marches of January 22nd--and they stand as evidence that the vast majority of American poets (and artists and writers of all kind) revile the new reactionary dispensation.

And what does it say, by the way, about the current Administration that virtually no poets or artists will abide its ideology? Where are the poets who support Donald Trump? What are their names? Why no Inaugural Poem to accompany lonely Toby Keith on January 20th? (Though not that a President who doesn’t read and whose tastes run to gold-plated toilet fixtures would request one.) This book makes quite clear where today’s poets collectively stand, unique and independent as each one is. They are united in resistance to the politics of greed, intimidation, and divisiveness. In their gathering here--emblematic, to be sure, of a vaster cultural opposition--there is a promise of solidarity and collective action to come, the petty factions and coteries be damned, though honest self-critique be exalted (a crucial difference). The book announces--and this is immanent and key to its message and position--that though the new reality has stirred emotions of hopelessness, isolation, and fear, it has also given rise to deepening fellowship, stubborn hope, and fierce resistance. May activists in the coming battles find inspiration in some of these poems and share them widely with comrades and friends.

Our book opens with an eerily prescient text, “Inauguration,” written in 1979, by the great, underrecognized African-American poet Lorenzo Thomas. It closes with one of Walt Whitman’s most neglected and misunderstood poems, “Respondez!” first published (under a different title) in 1856. Whitman was one of the world’s greatest poets of populist democracy, an idea that was still struggling to find a home in the middle of the 19th century. Like all historical beings, he suffered from biases of his time, but his commitment to democracy and to the common people who are its essential actors was passionate, visionary, and unshakeable. “Respondez!” was his angry, sharply ironic demand that U.S. America respond to the betrayal of its democratic promise, its abandonment of equality for oligarchy, of fraternity for institutionalized racism and sexism, of spiritual generosity for greed and money grubbing, and of the liberation of Eros for a violent, Calvinist repression of human energies. His attack on U.S. American hypocrisy, his enraged, sardonic revelations of the nation’s political and cultural self-delusions, rings all the more true today as we witness the violent assault on egalitarian values and institutions unleashed by the current regime in Washington.

But the very same year he released “Respondez!” Whitman also composed the rapidly-revered “Crossing Brooklyn Ferry,” one of the closest things to a time-machine, linguistic or mechanical, ever made by a human being. In it, Whitman intermingles past, present, and future in mystical, sometimes unsettling ways. He addresses us head-on, in a kind of continuous, oceanic temporal space, confidently aware that we are listening and looking back at him, fully in his company on the democratic crossing. As he assures his readers to-be-born, we deeply see what he sees and feel what he feels. The strange and moving thing is that his voice is here with us, relaxed and common, crossing over loud and clear, requesting our comradely presence and solidarity in the mystery of time. And asking all generations to consider that our voices, individual and collective, are to cross over and touch, in who knows what ways, the unfolding present that has not passed and is yet to come.

Paradoxically, while these two singular poems could not be more different, they are at the same time deeply complementary. For it’s in their contradictory registers that these near-simultaneous works (one discordantly dissident in its negative critique; the other invitingly accessible in its affirmative hope) show how profound and representative and complexly political a poet Whitman is: one who is capable of moving in double-voiced ways between the registers of a clashing, ironic protest and the prophetic harmonies of an unbounded solidarity. We will require the tones and spirits of “Respondez!” and of “Crossing Brooklyn Ferry,” both, in the coming period. We will need both the didactic and the visionary, the demotic and the abstract, the satirical and the lyrical, combined in ever more surprising ways, if poetry is to be heard beyond its generic provinces, in which it has been too long caught. We need to be with Whitman.

In who knows what ways? That is the large question we need to put to ourselves, as the voices of a future poetry try to speak through ours (do they yet?) in this difficult and momentous time. May this book be both a part of that asking, and one small and inaugural contribution to an always unfinished reply.