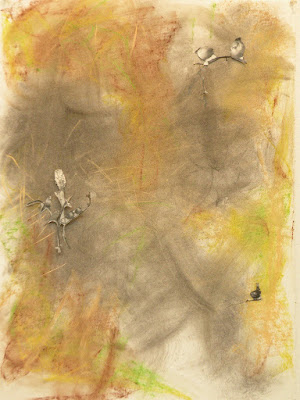 Sheri Reda’s Stubborn, a chapbook just out from the politically oriented Locofo Chaps, hits the metaphors for our current political mess right out of the gate.  Her opening poem “God Makes an Omelet” brings biblical images of dawn and naivete directly to the anti-Eden of broken eggs and broken hopes, “broken as the first illuminated day/in Eden/ where sunlight played in the future ruins.”  She immediately follows this up with the sacriligious (and yet sadly un-exaggerated) “First Love,” in faux first-person voice of President Trump declaring his lust for the First Amendment. “Nobody loves the First Amendment more than me,/ Nobody./ I love it so much I want to grab it by the pussy,/ dive into its muff.”  The word play in the poem brings us to double meanings of “take out another amendment now and then […] Sorry, Melania,” and highlights the gluttonously mysogynist entitlement with which our President approaches the world.

Throughout Stubborn, Reda brings a variety of responses to the world in which we now find ourselves, including a number of examinations of our own roles in creating this world.  “11pm we” opens with “swaddle ourselves in the approximate/ solace of thinking people” and “Not so Bad in Lincoln Square” and “A Good Laugh” both take on the question of privilege and divided neighborhoods and gentrification.   Immigrant communities, religious and political views, materialism and the search for health and balance in flux throughout Chicago neighborhoods and within families fuel Reda’s exploration, especially notable in “The Work God Gave Us (A Thanksgiving Dinner Conversation.)” The many voices and perspectives at one dinner table speak, “what people insist on calling a rainbow/ is nothing but a slick on wet cement” and “God cheated too:/ when he took Adam’s rib. Things have never been right/ since then.”

Sustainability is a throughline for the chap, and Reda ties it directly to our political administrations in “Fat and Somewhat Happy with Vilsak and Perdue” with the lines “the Obamas/ and the Bushes/ and the Clintons/ and the Romneys/ all secretly eat organic foods./ But the Trump glow speaks of new aesthetic.”  Apocolypse is not a distant future to fear in these poems, it is a seedling already well established, ours to nourish or not.

Reda’s answer is clear in the title of her final poem: “Begin again: Listen better.”

As in her poem “New Bethlehem,” be

“stubborn, like
those cinders that cling
to the deep black
tar paper roof
and shine, shine, shine
in the dark
as if to light the way.”


Naomi Buck Palagi grew up in the woods of central Kentucky, and has lived around the South and Midwest before settling in Northwest Indiana.  Her poetry frequently focuses on place, and ranges from traditional to highly experimental.  She has work published in journals such as Spoon River Review, Eleven Eleven, Moria, and Masque & Spectacle.  She has chapbooks with Dancing Girl Press, Dusie Kollectiv, and Locofo Chaps.  Her first book, Stone, is just out from BlazeVOX books. For more of her poetry visit http://naomibuckpalagi.weebly.com