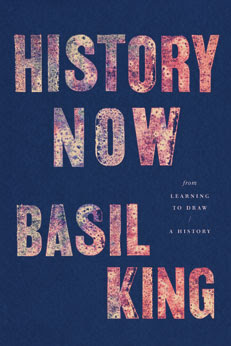 History Now.  Yes, from its beginning pages, the book offers the sense that the author—a man of seasoned years—is looking back and taking stock of his life that unfolded within the many contexts of his time. There is much to parse and say about Basil King’s latest book, but perhaps it’s because I’m not part of his life (though we’ve met and I like the dude) that my attention initially was taken up by the structure of the work instead of the narrative specifics of his life—a structure that helps catch then retain the reader’s interest. By structure, I mean that the work unfolds as a series of moments broken up by asterisks and knitted together by insertions of the italicized word “Pause.” That encouraged pause is helpful as the book is wide-ranging and there can be moments that seemingly have nothing to do with each other but are situated next to each other.  The leaps between such moments are easier when, first, one pauses—for one doesn’t always pause and then continue in the same vein before the pause-interruption; one pauses for a mental shift that allows the read to proceed seamlessly into something not immediately connected with what one just read.

Nonetheless, let me contradict myself for the matter at hand is poetry: but of course everything is connected in this book—all the moments are from the point of view of the same individual, the author King. But as I said, the book and the life and the author’s concerns are wide-ranging so that the use of discrete moments is helpful in helping the reader take it all in. I can’t help thinking that the use of (I guess what I’m calling) “moments” seems appropriate as it allows the reader to (pause to) consider each moment as if it’s an object—specifically a three-dimensional object (e.g. sculpture?) so that one can inspect it ( / consider the moment) from all angles. It is during these paused considerations that one can read an excerpt like this—

Over twenty years ago Martha’s cousin Pete Dandridge brought us two wild kittens that he had caught in a barn in the Hamptons. We named them Turner and Carr after the English painter J.M.W. Turner and the Canadian painter Emily Carr. For days they hid under the couch or the refrigerator. We put food out for them and after we went to bed they would come out and eat. Martha would get on her stomach with yogurt in the palm of her hand she would spread her arms out and wait. She did this for days and eventually the kittens came out and licked the yogurt off her hand. Martha continued doing this until she could touch them and they began to jump and play in front of us. It was then we discovered that we had named them incorrectly. Turner was the female and Carr was the male. Also at that time Carr developed a bloodshot eye. We took them to the vet hoping to get them their shots. The vet came out and told us that both cats had feline leukemia and we had them put to sleep.

—and realize that that moment isn’t just about Martha and the kittens but serves as a stand-in for the vagaries of lives never fully under the control of those living them.

The above excerpt also manifests one of the strengths of King’s eye and writing style—first he observes keenly as he lives in the moment, and then articulates what happens without embellishment but articulates in a way that opens windows into what are deeper significances.  Here’s another example—and I choose this one because I find it utterly hilarious, and specifically hilarious because it’s unembellished or deadpan:

The above excerpt also exemplifies King’s understanding of “HISTORY,” specifically that HISTORY also is, as the visual from the back cover notes: 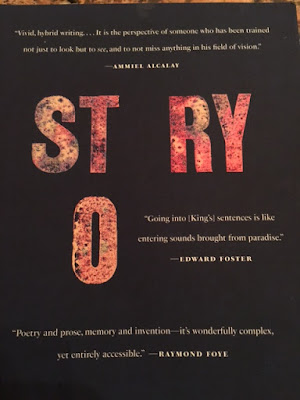 (You can compare the above image of back cover with the front cover image that begins this review.)

I think this excerpt about Henry V says a lot, too, about the author:

It is a fact that the night before the battle Henry V dresses himself in commoner’s clothes and goes amongst his troops. Listens to what they are saying, talks to them and finds out what some of them think of him. It is brilliance and humility that a king would consider what his men are thinking. King Henry’s fledging entry into democracy is politically astute and farsighted. But it should never be thought of as altruism. Still King Henry may have been the first monarch to consider his men and his country to be as important as he is.

The blurber Ammiel Alcalay (aptly) says about History Now that the book presents “the perspective of someone who has been trained not just to look but to see, and not to miss anything in his field of vision.” I agree, but I’d expand that to say that King doesn’t just see everything (in his field of vision) but he wants to see everything. Surely what King has accomplished in this book (as well as his other accomplishments as both writer and a visual artist) would not have been possible without such an immense desire.

One of my favorite passages from the book is “Autobiography has more than one ambiguity.” The line keys up the reader for what will be, as they say, a killer ending. I won’t share the ending but I will share its hard-earned last sentence. One hundred fifty-seven pages led to this sentence and by reading this sentence, I hope you will be encouraged to seek out this RECOMMENDED book:

Why do people go to war