In the interim the sun shone down the long tracks like the world would end, metal
blazing, trees on fire, chevy suburbans blinking left and being blinded, never
turning.  All creation held its breath, the dj paused, the boy on the street stepped
on the curb and stopped, unsure.  Pilots in their cockpits felt the stomach lurch of
free fall and reached, hands out, for the radio.

An alley cat broke its hiss and looked up.

Children in classrooms lifted pencils from small dots and frowned, confused, while
teachers placed hands on cinderblock walls for support.

It didn’t take long for the next cloud to make its way over, to temper the sun.  It
had only been the space between two semi-trucks on the open highway, the time
for a traffic light to turn green, the pause between a pregnant woman’s breaths.

The cloud moved and creation breathed again, all memory ofbrilliance eased in the


crackle and smudge of motion.

to her car. the surge of the dream hits, blurring
her key as she jams it in and twists,

opening.
--what if there was a heart, with a body, solid like rock--

the car growling to life amid night-visions, the bell
from a strength-hammer at the fair continually ringing.

reversing the car, watching for traffic, the bell
ringing, her hand

reaching for the stickshift,
reaching--

a hand she knows; she knows
dreams are soft as a window pane reflecting

her own estranged face; the dreams are knocking her, hurricane,
the town alarms blaring a companion now.

every time she gets in the car now, the street lamps
looking so tall and

to themselves, not
needing her to hold them up, her shoulders not

aching as the lamps shed their light, no weight
added unto her heart, unto her

body with the solidity of sand, she keeps
gathering it to herself as the winds keep

blowing, the fair bells are ringing, everything
looks like a warm hand. 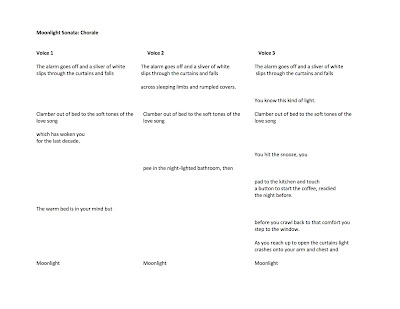 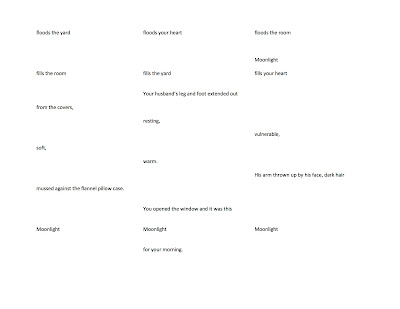 Naomi Buck Palagi grew up in the woods of Kentucky, meandered through Ohio, Mississippi, and Chicago, IL, and now lives and works in Northwest Indiana. She has work published in journals such as Spoon River Review, Otoliths, Masque and Spectacle, Eleven Eleven, BlazeVOX and Requited, and has had work featured on WGLT’s Poetry Radio.  She has chapbooks including Imagine Renaissance from Locofo Chaps, and her first book, Stone, is recently out from BlazeVOX books.  For more of Naomi’s work, visit naomibuckpalagi.weebly.com.