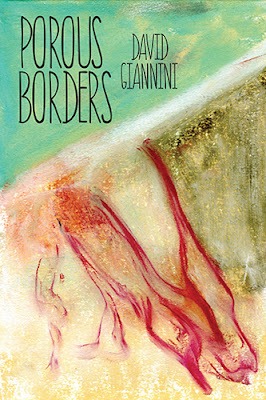 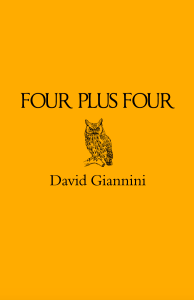 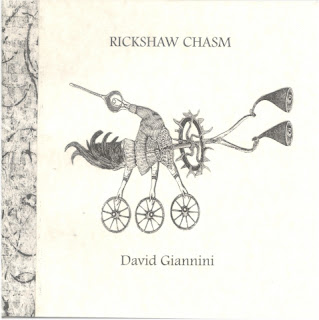 “Shutters,” the book’s first (or second if one considers the Preface a poem) poem in David Giannini’s new book is a powerful opening and good articulation of the book’s theme as presented by its title, POROUS BORDERS. An equally strong representation is the ending to the poem “RAVEN”:

Looking for berries, the raven flies in and out of the fog.

The feathers under your head keep leaking from
their cloth case. They want to return to the
fowl who tried to fly south for the winter, but who
instead wound up slaughtered, plucked, then
eaten. What now, become mawkish, Porous?

I was 4/5 poems into the book when I read the above combination of the transition between the two poems. From the above excerpts, I was delighted by not just the transition between the two poems but also the unexpected question/insertion of the nature of mawkishness. That transition/combination made me believe that continuing to read the book will surface pleasurable surprises, and that the surprises will be layered. Thus, I believed ahead of my read of the rest of the book that the poems will befit porous borders in non-normative ways—“non-normative” is the word that comes to mind as I write this review, but, of course, the concept of “normal” is unstable and such, too, seems a fitting thought to surface. But let me begin again by sharing the pleasingly powerful first poem (click on images to enlarge): 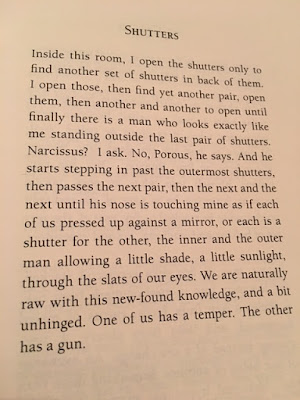 After the above poem, other incidents unfold in subsequent poems that affirmed my faith in the book, incidents like the witty beginning of “Soft Water”—

Collecting around rock and branch, snow at
the edge of the field becomes white stags. Wind
swirls and these deer blow back and forth across
the road, something Porous in sight.

In Oso, dandelions return with a vengeance.

There are also curious elements, though the following example I highlight is also one that, for me as an adoptive parent, contains logic: “Deflagrations, A Fairy Tale” where a child conceives his parents rather than the other way around.

As well, there is the eerie push-and-pull depicted in 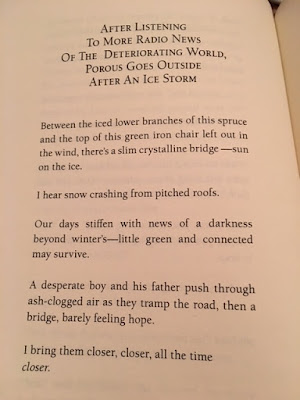 The skewdness that elevates these poems arise in part from Giannini’s sharp powers of observation; here’s another example from “Valentine”:

No wind can stand not to bump into something.
A starving wind chases cardboard boxes down
the road. Even winds crossing deserts strive for
an upright bit of cactus or camel, while wind
over waves makes of the waves lewd motions
and spit, and dunes take the shape of what
wind occurs to them.

Logically, the effect can be vertiginous—here’s how “Alibi” begins:

As Porous tells it: In a canyon a sound was
very hungry, as hungry as a mountain lion, so it
went looking for ears.

Finding no ears among the canyon walls, the
sound didn’t know it was also an echo.

Logically, too, there’s much lucidity in these poems, such as this excerpt from “Quotes, A Collaged Letter”:

One of the strange things about poets is the
way they keep warm by writing to one another
all over the world….A correspondence is
poetry enlarged. There are two worlds—nature
and the post office.

The above made me laugh. To be a poet is to be intimate with one’s local post office. I know all of the guys in mine. And I recall May Sarton referencing her post office too in her famous journals. The above poem continues on to deliver another on-point line:

I have never known anyone worth a damn who wasn’t irascible.

Though not universally true—if only because I know non-irascible people who are worth more than their weight in gold—there is sufficient truth in this observation to elicit empathy.

What’s further interesting to me—though I suspect this effect is also logical—is how there’s a discernible strain of the ominous through the book. For instance, in “Yoga,” there’s the line

It is night; just listen

which, later in the poem, turns into

It is night; and it listens.

That’s one of the strengths of this collection: its poems freshen ominously. Indeed, the way the adjective becomes somebody, a creature named "Porous," is to create somebody that's a bit discomforting. It’s a testament to its power that after I closed the book, I put several other books atop it as if to ensure it remained closed. Now, after having just written that prior sentence, I wondered if I was being over-dramatic. So I took it back from under the pile and opened the book at random … to find this: 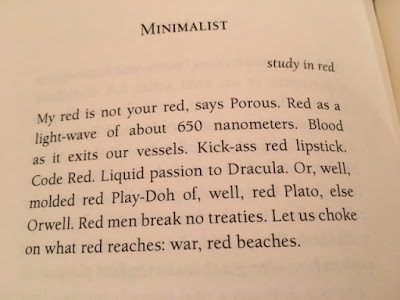 “war, red beaches”? That’s some minimalism. I tried another random opening of the book, which brought this: 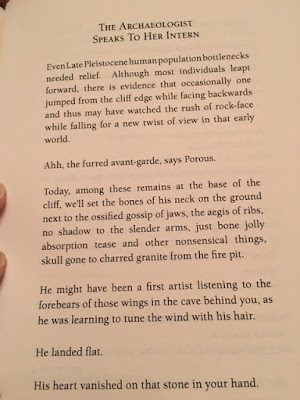 So, okay: Yes, I recommend this book, but I also recommend you shut it tight after you’ve opened it to read it. For borders are porous.

Giannini also released two chapbooks in 2017: RICKSHAW CHASM and FOUR PLUS FOUR. Having first read POROUS BORDERS, I was not surprised to find—and delighted in the finding of—the same mental agility that allows the poet to swerve in his language and deliver pleasant surprises. Here’s the deft first poem-and-de-facto-prefatory-poetics from FOUR PLUS FOUR: 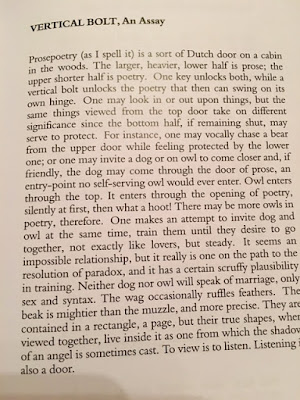 The above is convenient for not just being an effective prose poem but for sharing the poet’s thoughts about form (form=content, obviously in this poem).

RICKSHAW CHASM offers a layer of enchantment from collages by John Digby juxtaposed with Giannini’s poems. Digby’s juxtapositions are as marvelous as the textual combinations found in Giannini’s poems. Here’s a sample of both; in the chapbook, these face each other effectively: 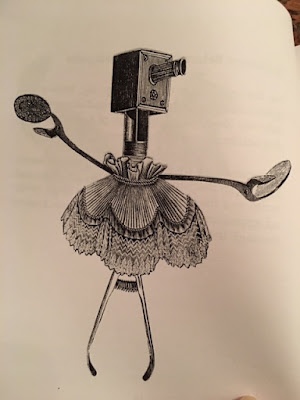 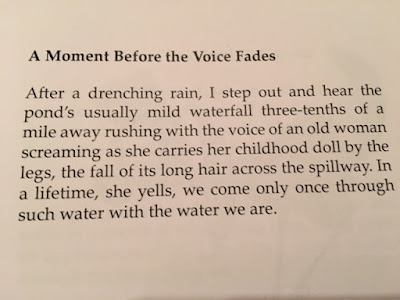 With all three publications, David Giannini has delivered poems that result in poems that are deeply-satisfactory in pleasingly-unexpected ways.  I thank him for the experiences his poems provide.