WRITTEN IN THE DARK: FIVE POETS IN THE SIEGE OF LENINGRAD 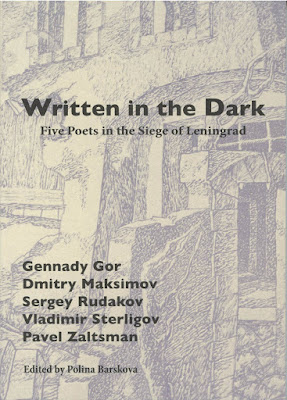 Written in the Dark: Five Poets in the Siege of Leningrad, edited by Polina Barskova
(Ugly Duckling Presse, Brooklyn, 2016)

Compiled and translated by Polina Barskova and a team of Russian-to-English transcriptionists, Written in the Dark is unique in that it captures both the feelings of desolation and utter despair that surrounded the Siege of Leningrad, and the avant-garde history of Soviet poetry that, until recently, were brutally and utterly repressed by the policies of Stalinism. Given the subject matter, one must wonder if even Stalin can be forgiven for their censure. Seventy-six years after their repression, these poems read like a death-knell wrapped in the tortures of Abu Ghraib. Translations are by Anand Dibble, Ben Felker-Quinn, Ainsley Morse, Eugene Ostashevsky, Rebekah Smith, Charles Swank, Jason Wagner and Matvei Yankelevich.

The first poet explored in this volume is Gennady Gor, who, out of the five poets explored, was the luckiest. His poems were composed between 1942-1944, after he was evacuated from the city. Nonetheless, the torture and death of his fellow Soviets weighed heavily on his mind, which shows in expression through the fictional deaths of his wife and children. This is displayed at its haunting best in an untitled poem on page 41, which ends with the line “In this apartment, this grave of ours.”

Dmitry Maksimov made it out as well, during the first long winter of the siege in 1942. His recounting of death and hunger, unlike Gor’s, is very real: in the poem “War”, Maksimov speaks of it thus: “Not enough porridge to go around/As I lay barely breathing/With Natasha under our furs,/We saw her soul tearing away.” In this moment, we are faced with the cruel reality of both Nazi Germany and Stalinism and, try as we might, we are unable to turn away.

Just one untitled poem makes up the entirety of Sergey Rudakov’s contribution, and even it is unfinished: left unnamed, the poem was not completed before Rudakov was killed in action in 1944, two years after his evacuation from Leningrad. The poet seems to predict his own death on page 83, writing “Orphaned, paupered, gone extinct/Apartments, boarded, locked,/Stand absurd in hollow calm-/Silence falls on untended vaults.” The duality of fatality here, with the deaths of both the writer and the city he defends, offers a sublime view into Leningrad’s horrors untold.

Vladimir Sterligov stared death in the face in Leningrad…and lived to make a defiant return. Wounded on the Leningrad Front in January 1942, he was retired from action and evacuated in June of that year. Once the Siege was over, he returned to form a unofficial school, one that worked outside the bounds of the regulated state media apparatus. His defiance is spelled out succinctly at the end of his work “The Feast of Kings”, where he proclaims he and his comrades “We rulers of the fatherland.”

Pavel Zaltsman had no desire to return to Leningrad, even after the war and the death of Stalin. An artist by trade, he was evacuated in 1942, and until 1955 composed the works that made this volume. He makes no bones about the horrors of Leningrad; in his poem “Growl”, he declares, in the face of the Siege, that “I’m a fool, I’m shit, I’m a wretch/I’ll kill any man for sausage.” Yet the poem, while coming in like a lion, goes out like a lamb, when he declares “I suffer, you hangmen, can’t you see/From urinary incontinency!”

The poetry in this volume, although postmodern and surreal, paints a dark cloud, complete with a hangman’s noose, over the legacy of the wartime Soviet machine. War is hell, as it has been said numerous times, and in these forms, each poet captures the feeling well. Barskova, a professor at Mount Holyoke College in Hadley, Massachusetts, does an incredible job with this volume, allowing it to serve as both an academic primer and a testament to the horrors of Leningrad. Her terminal introduction, as well as the afterword provided by Ilya Kukulin, make this a volume well-worth the read.