WE ALL SAW IT COMING by BILL YARROW 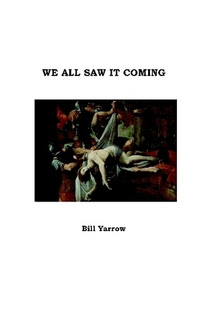 We All Saw It Coming by Bill Yarrow
(Moria Books’ Locofo Chaps, Chicago, 2017)

Bill Yarrow’s title confronts us with an uncomfortable paradox. While we all saw it coming, in the sense of arriving like a mob of drunken, unwanted guests – the racism, xenophobia, misogyny, chest-thumping nationalism tinged with white supremacy – most of us did not see it coming, and were shocked by the election results. As the title poem has it:

I well remember watching the Daily Show as John Stewart gleefully mocked Trump’s announcement that he would run for president, and, of course, I relished the joke, just as I joined in when so many predicted that his candidacy would fall apart, or even better, lead to a Democratic landslide and maybe even control of both houses of Congress. We all saw it coming, but…

Yarrow’s poem twists away from the camouflage of “we” in the poem’s final lines:

We all saw it coming

I mean I, I saw it coming
and did nothing

Many fine poems in this collection work in the language of grief and rage. Look at poems like “Behave Yourself” (he can’t) or “Go Unlovely Trump” (after Waller’s “Go, Lovely Rose’). In “Semi Tiresias,” a series of triplets describe portents of approaching debility or death:

The personal suddenly shifts to the political in the final section:

What makes this piece so bitter is the personal prophecies are so inevitable, marking, as they do, the devouring power of time over the human body and mind, while the political prophecy describes a failure that is unmoored from natural processes of decay; they are self-inflicted and unnecessary. And that may be why I took such comfort in my favorite poem in the collection, a brilliant response to Ludovico Carracci’s painting “Body of Saint Sebastian Thrown into the Cloaca Maxima,” which is on the collection’s cover, and, in a different way, in the text. The poem, “Ways of Seeing: Carracci,” describes the saint asleep or unconscious, “about to be/thrown into the great sewer of Rome,” and that after having been transformed into a pincushion of Roman arrows. But the painting’s secret, and the poem’s, involves rotating the image:

then he becomes beautifully
vertical, his dreaming body
like a sleeping bird floating
in warm, soft air

We can hope that defeat and humiliation, the emergence of all we find dangerous and repugnant about American nativism, can be turned, transformed into and by a newly energized body politic.

Steve Klepetar’s work has appeared in nine countries, in such journals as Boston Literary Magazine, Deep Water, Antiphon, Red River Review, Snakeskin, Ygdrasil, and many others.  Several of his poems have been nominated for the Pushcart Prize and Best of the Net, including four in 2016. He has published 12 collections, the most recent of which include "A Landscape in Hell" (Flutter Press); "Family Reunion" (Big Table Publishing); and "How Fascism Comes to America" (Locofo Chaps).