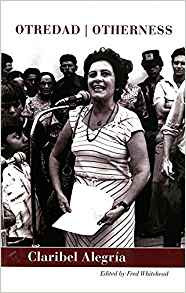 Claribel Alegria, to quote from this book’s back cover, “is one of the greatest voices of 20th century Latin American poetry. Her writing of the 1950s and 1960s reflected the views of the ‘committed generation’ of Central America, seeking social and political justice for its citizens. Her mature work reflects her anger and sense of loss over the murderd and ‘disappeared’ throughout Latin America. In this volume, published in Madrid as Otredad in 2011, she separates her writing from her daily existence.”

I share the above bio because it’s readily part of the book by being on its back cover and reading through OTREDAD, OTHERNESS, a bilingual edition  edited (and translated? The book doesn’t specifically say) by Fred Whitehead, made me wonder what it must be like to live a life steeped in Alegria's tragedies. For this new book, two poems in the middle of the edition together address the resulting sensibility of such a life as Alegria’s: “Small Hell”and “Invocation.”  I share them below (click on images to enlarge): 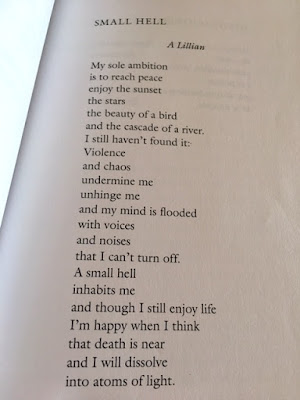 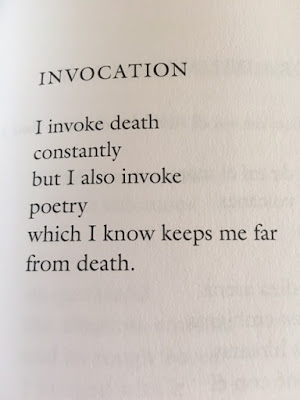 What’s intriguing about this (above) combination is how one might think, therefore, of poetry as a saving grace and (thus) expect the many poems Alegria has written. But there’s more than one poem in this book that are like “A Trick” below which relate to death as a release. 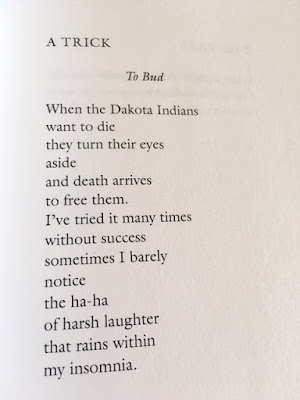 Perhaps such is logical—poems could not change the facts of Alegria’s reality. It’s interesting that this book is presented as one where (unlike earlier, other work) Alegria presumably “separates her writing from her daily existence.”  References, sure, but one can never separate the effect of existence from one’s consciousness/subconscious.  Thus, the collection does not seem separate from Alegria’s harsh history in terms of the sadness, despair, anger and so on that logically surface in a life where one battles for social/political justice. This is not a criticism—the emotive force borne by Alegria’s struggles actually make the poems stronger.

While not, for the most part, a joyful read, therefore, OTREDAD, OTHERNESS is recommended for its moving poems whose potency was very much earned by the poet. Early in her life, she left her family’s Nicaraguan home to spend her childhood in exile in El Salvador. In 1979 when the Sandinistas overthrew the Somoza regime, Alegria returned to Nicaragua to help it rebuild.

But if we take the collection as presented, is it one whose poems are separate from her “daily existence?” Well, it certainly works that way, too. After all, there is a sense of optimism and redemption in certain parts— 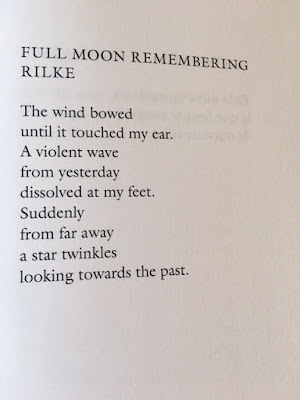 —which moves me to this excerpt from “Selene”:

I saw lions
eagles
reptiles
none reach the cruelty of man
but no one loves
as he does.

I am glad part of Alegria’s experience is witnessing/sharing/feeling this love. And that she returns this love with poems that will last beyond her “daily existence.” Also from “Selene”:

I was a witness to love
and death
I saw skeletons of children
mutilated childrend
who smiled
and winked at me
I saw bombings
rapes
fires
fugitives in trains
going nowhere
but I also saw faces
changed by love.


Eileen Tabios is the editor of Galatea Resurrects. Her 2017 poetry releases include two books, two booklets, a novella-in-verse, and five poetry chaps. Forthcoming later this year is a new poetry collection, MANHATTAN: An Archaeology (Paloma Press). For 2017, she also edited the anthologies PUNETA: Political Pilipinx Poetry and Menopausal Hay(na)ku for P-Grubbers. More info at http://eileenrtabios.com