WHAT IS POETRY? (JUST KIDDING, I KNOW YOU KNOW) edited by ANSELM BERRIGAN 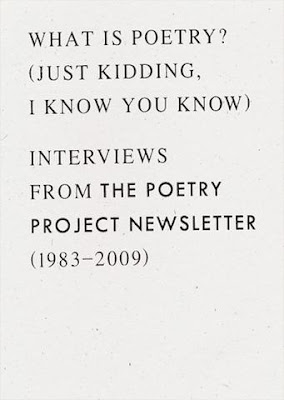 WHAT IS POETRY? (JUST KIDDING, I KNOW YOU KNOW): Interviews From the Poetry Project Newsletters (1983-2009) edited by Anselm Berrigan
(Wave Books, Seattle/New York, 2017)

The subtitle speaks for itself. Entonces, how does one “review” 416 pages of poet interviews? The poets are asked about their work, how they do the work, what inspires the work, their opinions on other works and poets, and so on. When I note “review,” I mean to critique. But is criticism possible? A poet said I lived/live and wrote/write in a particular way. What’s to criticize?

Criticism would be more applicable, it seems to me, to the results of how the poets lived/live and wrote/write.  But this book is not an anthology of actual poems. My review—rather, engagement—then must become (also) me talking about me—i.e., I’ll be highlighting below certain sections that snagged my attention as a reader.

But what I can also say, though, is that I strongly recommend this book—it is well-edited (and/or perhaps the interviews originally were well-written) so that the prose flows; it is educational; it is interesting; in places it is funny; in places it’s gossipy (in a fun way); and it succeeds in presenting a profile of The Poetry Project that makes the reader applaud its existence (I followed the editor Anselm Berrigan’s suggestion to read the thing chronologically from first to last page).  Interestingly, I didn’t get a lot of angst from the 416-page tome—aren’t poets supposed to be angst-sy? But perhaps this wasn’t the place for angst, and I actually like this—from this project, I mostly glean a seriousness in purpose and I appreciate such. So here are a few of the (many) excerpts that snagged my attention—the variety, I believe, attests to the wide expanse of the covered material.  Different readers no doubt would choose different excerpts, have their attention snagged more by other bits, but the point is that this book has something attention-worthy for a wide variety of readers.

First is this excerpt from Judith Goldman’s interview of Alice Notley. In this excerpt, Notley discusses the influence of her husband Ted Berrigan (click on all images to enlarge): 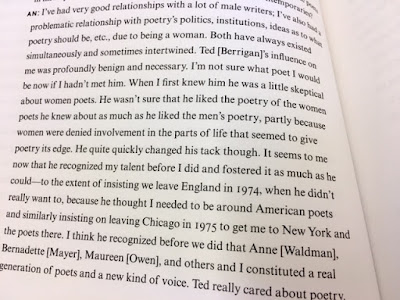 I was a bit astounded (impressed) by Berrigan’s decisions as described above as regards moving back to the U.S. and then moving from Chicago to New York because he thought Notley “needed to be around American poets” and that he identified how Notley, Anne Waldman, Bernadette Mayer, Maureen Owen and others “constituted a real generation of poets and a new kind of voice.” It’s not just that Berrigan had the prescience to make the identity—it’s that he pushed for doing what he thought was required to support Notley’s development. If I’d married a poet, I’d hope to have that kind of support for my work …

Second excerpt is from Magdalenza Zurawski’s interview of Renee Gladman, the section where Gladman is asked what got her “interested in the avant-garde”: 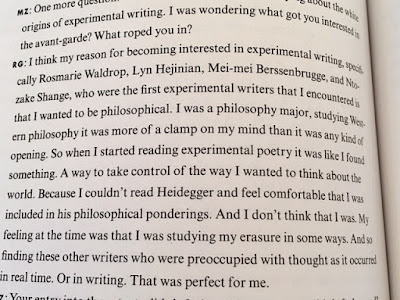 I was moved by Gladman’s account of Western philosophy as an “erasure” of her. The follow-up to the above excerpt—the next three questions and answers—is illuminating, attesting to Zurawski’s interviewing skills. Read the book for what I mean since I can’t present everything here.

The third excerpt is from Dale Smith’s interview of Lorenzo Thomas, focusing on Leni Riefenstahl: 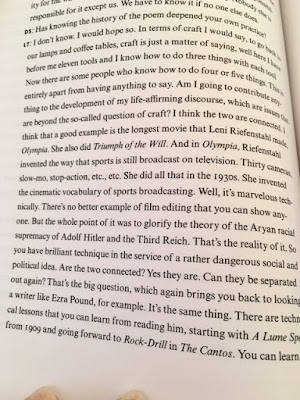 I think it’s always worthwhile to consider the tension between the creator and the created, the author and the author’s work—I, for one, find it difficult to generalize an approach to the topic and note that Thomas, too, says later on in the interview after the above excerpt: “How much of the idea does the technique reflect and vice versa? I don’t know the answer to that. I wouldn’t even speculate. Each case is different. There is an answer there but I jut don’t know enough yet to frame one.”

The fourth excerpt is from Lisa Jarnot’s interview of Stan Brakhage. Here, Brakhage is discussing Robert Duncan’s infatuation with Helen Adam, but I was struck by what he shared to be Duncan’s and his partner Jess’s view of the moon landing: 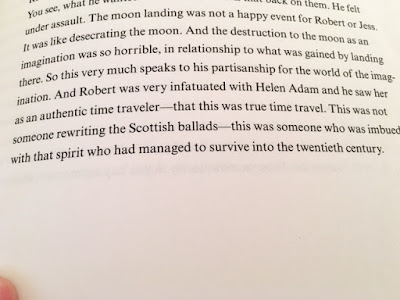 When I read the above, I paused for a while, considering how Duncan’s privileging of the imagination made him view the moon landing as a desecration rather than an opening up to the possibilities of (future) space travel. So much, after all, has been imagined about what’s out in space …

The fifth excerpt is from Lisa Jarnot's interview of John Godfrey: 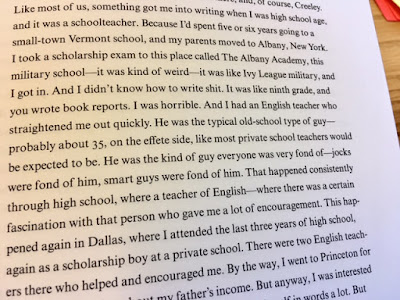 I note the Godfrey excerpt because the effect of teachers should always be appreciated. In fact, reading this made me remember my English teacher at Peary Junior High, Mr. Mildner, and journalism teacher at Gardena High, Mr. Ford.  Both teachers encouraged and supported my early writing efforts. Thank you, gentlemen, across the years ...

The sixth and seventh excerpts I share are both from Greg Fuch’s interview of Eileen Myles.  Here’s the fifth: 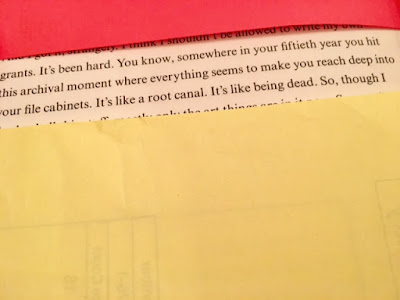 In photographing the excerpt, I actually laid nearby pieces of paper on the page to focus on what Myles is sharing about her “fiftieth year.” It resonates as I’m at this stage—and it is so true: by this age, if you’ve been writing for a while, you have a body of work that you now can dip into and re-orient or recontextualize into new work. I don’t get the root canal, but I do get the “like being dead.” Just sayin’.

The seventh excerpt seems like a great way to end my list of samplings from the book. Here’s Myles again: 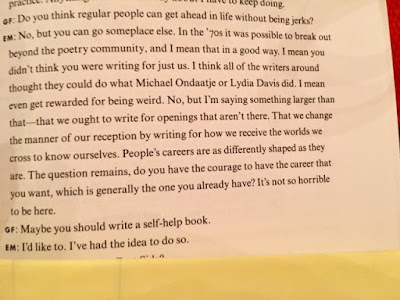 Simply, isn’t the above fabulous?!  And therein lies yet another reason to read WHAT IS POETRY?...  It illustrates why writers “ought to write for openings that aren’t there.” That seems like a good answer to a different but related question, “What is poetry for?”