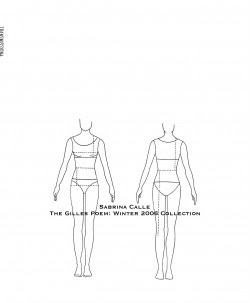 Looking at a chapbook from 2006 is like looking, in a sense, at a time capsule. Motifs such as women’s sexuality, at least in the straightforward, yet abstract manner that Calle presents it, was a newer invention eleven years ago, as was forming lines and lines of square text in a word processor because it couldn’t translate what was on the page. In this sense, Calle’s chapbook is revolutionary, or, at least, a glimpse into what was before it became what it is now.

The artist switches between two dominating styles in this volume. The first is a spaced out, postmodernist conversation that could be lifted from the text message strings of any millennial. In fact, the words in the Gilles sections of poems read just as that: disjointed, grammatically incorrect strings of nonsense that mean nothing outside the context of a very intimate conversation. And intimate these conversations are, touching, often, on sexual motifs. For example, in “Gilles Poem 86,” Calle says “I unbutton my/syntax—it is so warm in here)”, playing at a tension between the poet as a sexual creature and Sabrina as a woman. This tension continues in “Gilles Poem 80,” when Sabrina abandons all pretext and writes “I undress/(When I knew you)/so slip that punctuation/in my mouth.”

Throughout this series of poems, there are pictures inserted in the place of words, although, much like the texting technology of ten years ago, most of these images are so blurry that one can barely make out the subject. One contains a lesbian couple kissing, which, perhaps lends us to the identity of the hitherto unknown Gilles. In “Gilles poem 18” we are greeted with the clearest picture in the volume: an exposed breast, bracketed with the text “look:/--I bought you a map of the world”. Perhaps here is where Calle expresses the most frustration with the limitations of the technology of her day although, to be fair, Napoleon did well wooing Josephine with little but words. Words, perhaps, and his title.

Offsetting the sexual tension of the Gilles poems are several short free verses, dedicated to a range of people unknown to anyone but the author and their subjects. These poems lean more towards the sentimental. In Sunday Night, for example, Calle speaks of a car ride with, perhaps, a beloved, noting that “& I notice yr leg/looks/so cute/in those jeans/all hooked up/against mine…” This gives us a glimpse into an intimacy that is not shown in the Gilles poems, and which, for me at least, tends to humanize the author despite her attempts to be abstractly aloof.

All in all, this is a worthwhile read if one can find it. Transmission Press doesn’t seem to be around anymore (their website is nothing but links to printable coloring sheets, so if you’re into coloring, give it a look!), and I’ve yet to locate any more works by the author, online or otherwise. If you can track this volume down, however, give it a go: it’s a unique glimpse into sexuality and culture from ten years’ past.