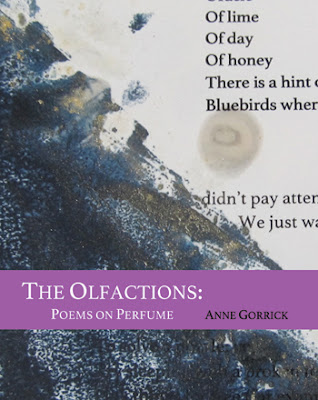 A long time ago, I had an email conversation with Anne Gorrick (we’ve yet to meet in person). We discussed wine-tasting lingo, a language replete with unsatisfactory descriptions that can be the easy byproducts of trying to articulate the experience of a tasted wine. Still, so-called “wine tasting notes” also can be accurate and specific. For example, when someone compares wine to “smoked meats” or “green leaf tobacco,” such can be tested. Other comparisons are not so easy to comprehend (I once knew a wine-lover who described her wine to be  “like dew on a lawn in Sri Lanka”). As I read through THE OLFACTIONS, I realized why Anne was so interested in our email exchange—the challenge of articulating perfume and its effects is similar to wine-tasting notes: how to capture linguistically the ineffable even as it deeply (and sensuously) engages the senses.

For Gorrick, however, this challenge can effect a poetry ever more resonant because of its non-objective source; the result is a poetry collection unique among its peers: THE OLFACTIONS. One begins with the question, “What is perfume?” It’s a liquid (simplistically) to mimic/evoke a particular scent, e.g. of flowers and/or spices. But what if one desires to evoke an experience, e.g. “Paris” (obviously an experience of Paris and not just the city) or “musk”?  I see “musk” frequently in perfume, and it’s interesting because it’s a so-called “base note” which means of what it is a base can be unstable. Here’s where Gorrick’s poetry arises: she suggests significances to the scents.  So a perfume, if evoking a romantic Paris, can have (say) citrus light notes whereas a Paris on guard against invaders can have darker notes.  My non-olfactory vocabulary betrays me here, so let me go to a specific example—“To Take the Thought And Turn it into a Scar” which is a poem “after the perfume Patchouli 24 (for Le Labo by Annick Menardo).” Patchouli has a heavy, strong scent that Wiki says has been used not only in perfumes but also incense and insect repellents.  So it seems appropriate that I read in the poem

The feeling of worn out leather, a hot motor
Balanced with contradictions, cream drawn on our wrists
An idea that’s nothing like you
The welcome of occasions in tar, styrax

Further on, the poem goes on to offer (click on images to enlarge): 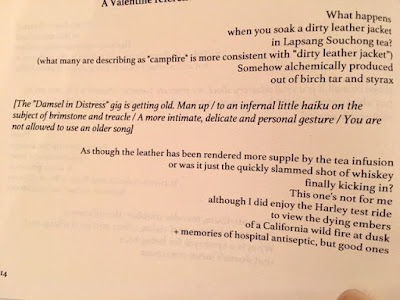 Later in the long poem, we come to this excerpt: 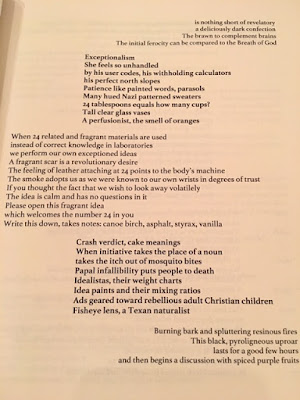 That journey from a scent to what it evokes reveals a lot about Gorrick’s mind and sensibility—and it’s a deep well for poetry. For example, the poem written “after the perfume Ambre Russe (for Parfum d’Empire by Marc-Antoine Corticchiato)” will lead the reader to a passage like 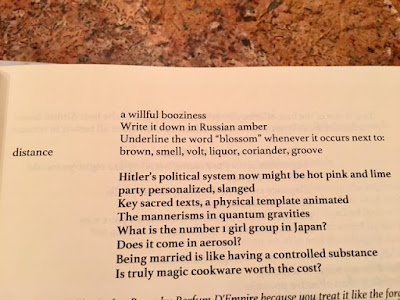 The above excerpt from “What are your imaginary numbers, your interior and narrative prompts?” shows how impressively far Gorrick’s words travel after turned on by the engine of what she scents. It’s a journey that also is possible because the poet did her homework, for which details arise in the interview that fortunately is presented at the back of the book (see below).

THE OLFACTIONS contain eight poems, all of which can be considered long or longish poems—a scale that’s necessary for revealing the layers of how a perfume can transport the poet into varied and unexpected meditations. Actually, the poems’ titles reveal something about the phenomenological depths of this collection. All the poems are “after” a particular perfume and here are the titles from the Table of Contents: 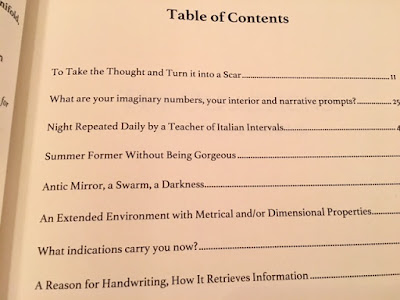 One of the poems’ strengths is the rush of energy from first to last word, even more admirable given the length of the poems. The reading’s momentum doesn’t flag, even when attention snags several times upon the lushness of language and specificity of details. For an example, I open the book at random and see/present: 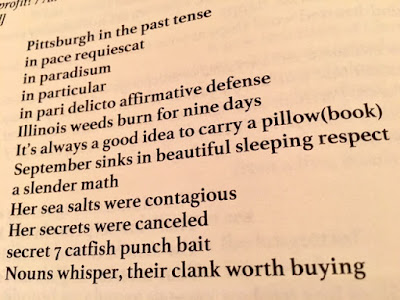 The collection is also further enhanced by an interview of the author conducted by Robert Kelly whose first question sums up the strength of this collection: to Gorrick, Kelly notes:

You have written a number of long poems that seem to have grown from a profound engagement with scents, perfumes, the chemistry of attraction and repulsion. I’ve read two of the pieces so far, and found them exciting, tempestuous, verbally exalted.

Verbally exalted—that there is as great a description of Gorrick’s achievement with this book. I’m happy to share that Galatea Resurrects previously published the Kelly interview and you can see it HERE.

I shall leave you with another excerpt chosen by randomly opening the book—such verbal exaltations as these are why, to date, THE OLFACTIONS is my favorite 2017 poetry read, a standing that likely will propel it to my private Top Ten by the end of the year.  Soar as you read something like—and again the book is randomly opened: 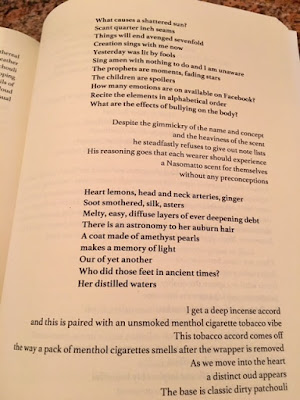 “What causes a shattered sun," indeed. THE OLFACTIONS is an immensely satisfying read!