RUNA BANDYOPADHYAY Reviews and Engages with a Poem 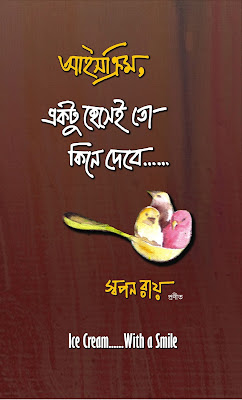 [Editor’s Note: The review was written in and first published in Bengali in Natun Kobita (New Poetry), January 2017. Subsequently, the reviewer translated it into English. I have left her translation alone without editing.]

Swapan-trip with melted ice-cream on my tongue

At the very beginning let me present a stage show of an ice-cream smile of the poet:

“In low winter, jests this and that  what’s the nature of porcelain
puts on smile  pours

Nothing much yet something more annoying than tying shoelaces happens in the morning; in the evening it becomes a finishing field;
after, oh, until it goes as well”                  (P-9)

Yes, this is just a drop of ice-cream smile, from which I reconstructed my own poems in an internalized language.@0K  From here I start my pleasure trip on a boat made of ice-cream. It’s a conversation with smile of ice-cream. Some utterance piled up in the exterior of action, in the interior of reaction. I start engaging letters into the utterance. Alternatively I could say, I start engaging words to my feelings. Sometime the words are letter-illusion of me, sometime of poet. I didn’t want any wall in between. Wall can’t be marked by water. There’s only engraving. And engraved wall is a history. I’m not writing a history anyway. I just want to implant words on my moments. The moment which is indistinct whistle of nocturnal language. The moment which is the reflected light of lost dew. The moment which is the unheard music of silent tears.

@1:
Switch on switch off. A state reversal touches the colour of infinite possibilities. Breaking the beginning of conversation it moves towards the hidden delirium. Antara* is extending concealment up to the horizon. Unseen line of verse at Sanchary*. The belief of return is blossoming inside negation. As if mark of displacement is scattering in the drops of milk. Essence of embryo is getting condensed inside the hint.

@2.
Return is a festival
Returning home towards the source
Incomparable death with dazzling flash
is hanging in the canvas of body
Your nectar home is floating
with the gesture of time-stream
I have to go back to your unfastened home

@3.
Circle is a geometric illusion. Forgotten return around the circumference. Travelling of the chord is writing the story of deportation. Straight line writes the wrong measurement. Shaped ruby or scandal in a single life will certainly go back to the grand gala of return.

@4.
River is how much stream or carnal incessant
Phulguni* blossoms in last spring
in the womb of Pisces
Looking the beauty I go down into water
Water is up-streaming inside water
Wiping your tears draw the eyeliner please
I’ll learn the couplet of bilingual swimming
with my virginal touch

Phulguni* – Bengali word for one born in Phulgun, the month of spring

@5.
To think about the time of gull, I’m exposing some hints from confusion. Snatch is an attacking word. Somewhat moon and Tinni*. Doesn’t complete any circle. Couldn’t be so? From the denim weep smile is elated in eight parts with caress of sky. In the hypnosis of subzero point stair-practice is spontaneously melting down to ice-cream smile.

Tinni* - Bengali name of a girl

@6.
The distance of eye from the throng of Shiuli*-letters
A certain obstinate word of philosophy
may be you
may be Riya*
If I put on my tongue
tradition melts down
In the relative motion of cloud-water girl
motion said, song is ascending
There may be an ascent
perhaps return
perhaps formation
of smile or movement of train

@7.
Two or three nocturnal sounds. Finger is weaving the alternate words of resound. Amorous cry is also an emigration in the bird’s translation. I am thinking about the closing of a day. In its long intervening space there’s sculpture of desire. If I can weave it, please give me a sweet break of ice-cream with a smile. When the river water melted with fire on my tongue, the water said, go on burning, you’ll become pure when you cross the quarry.

@8.
Look at me without looking
A secret proposal is shaking in the field of vision
I picked up a piece of smile from aqueous humor
Perception theory is floating in vitreous
Moving from a concept to decision
old feelings roll down
Somewhat illusive captivation of neuron
You are not illusionist
Still the illusionism in the philosophy of vision

@9.
The cautious girl sank once to cross the river. Translation of water is in the sinking address. If you are motionless, it becomes ridiculous. The history of upstream will be composed in the name of river. There’ll be sinking hesitation of damped cloud-girl in the slipping quicksand of mood. A Komol-Sa* gradually soaking the geometric hints of relation.

@10.
You clung yourself in the driving seat
I am restless by the love of poetry
Dejection in the letter of last rain
Cloud-water, bowed at the western-ghat*
flying towards me
Breathing is hiding all sighs
Clearing a sip of fog
from the burning of a potful kiss
deer of Eastern-ghat* has come down just now

@11.
I was translating your finger lines by picking rain drops. You kept a hint of horizon in the unbuttoned raincoat. I was just trying to become indifferent to the illusion of rainy season. Riya said, that is water, in the sigh of broken water-stair.

@12.
The river calls
Come my dear, come
Have to spend sleepless night
You have heard the sound of water
quick rise and fall of baseless stair
Just recall the old water-jingle
you may remember
hint of a wet face

@13.
Footsteps foreknowing how to sink in downpour. There’s Firefly cluster of freedom in footfalls. Under the influence of rhythm’s beauty it’s calling the cricket-chirping silence. You’re thinking about the end. Still a secret matins on the lips of every night, waiting at the balcony of overwhelmed remembrance.

Thinking what’s on the inside
the drinking glass of love embraced my finger
Flute of separation surrounds the brim
Who’s playing, who…?
Eyes are blossoming in the delight of fire
was there some water?
water-hoax?
Bokul*-smelling kisses getting wet
in tiny sip of water-hesitation

Bokul* - Bengali name of a flower

@15.
Perception enigma jumps out from the pocket of Copenhagen. Eye is germinating from the molecules of hesitation. Whether you see or not, macro letter from micro is writing down the quantum suicide note. Shadow of cat is hiding behind the consciousness, arranging the correct point of superposition. The life entangled on the finger of Schrodinger said, that is not the death but duality, waiting for you.

@16.
How far you are from me?
Becomes heavy to think very far
I was thinking some weight with mass
To search the height you lost me in the pine road
Are you unaware of the memory-less static energy?
Though the streak of lightning is momentary
see that how the old waterfall gets wet incessantly
Amazement is so conventional
I’m thinking to pick up wonder
Are you coming crossing the distance?

@17.
Being fog-bounded I’m thinking of the approaching winter. Cold’s definition rolls down in whimsical sunflower. Ego of denial opens itself. If acknowledging suicide thinks of fire, you bow down to pick up the illusive resonance. Will the calamitous finger sing do-re-me?

Water accumulates in your eye’s privacy. I’m thinking whether the chemistry of salt is there or not. Then light scattered on my finger. But there’s no refraction affinity in the pupil. Possible wings to cross the aqueous humor. I’m weaving your hints with the words of tears.


@0K  The journey through this water-stair has created the space for me to reconstruct my own poems in an internalized language. In the process of reviewing Swapan’s book, I wrote these poems, with a structure of combination of both prose and verse, originally in Bengali, an Indian language, published in a Bengali print magazine, Natun Kobita. Here, in the first section I am presenting the translated version of my reconstructed poems and in second section poems of Swapan’s book (only the translated version by Arka Chattapadhyay) with reference no. @1 to @17.  The references are used to show that which and how the poems of the poet Swapan has influenced me to reconstruct my own poems.

@0 Swapan Roy: He is one of the most innovative Bengali writers of 80’s. He focussed on alternative literary pursuits, and experimenting with contemporary poetic language. Swapan Roy was born in Jamshedpur, Jharkhand and brought up in Raurkela, Odisha. The first co-edited magazine by Swapan Roy was ‘Dridim’ (published from Raurkela). In the year of 1984, his first book of poems ‘Ami Aschi’( the arrival) was published. After that, he authored several poetry and prose books: ‘Che’ (poems based on Che Guevara's diary), ‘Kuasha Cabin’(misty cabin), ‘Lenin Nagari’( metro, named Lenin), ‘Deshraag’ (deshraag, a melodic mode in Indian classical music), ‘Cinema Cinema’, ‘Swarger Focus’(heavenly focus). Kunch Bahar( Rosary pea's auroma). … to name a few amongst them. His poetry anthology ‘Swapane banano Eka’(Made in Swapan Alone): Edited by the poet Barin Ghoshal and published by ‘Kaurab’ publications in the year of 2009. He is a hard-core traveller. Tracking for poetry takes us a long way…Where? Swapan has kept a footprint for that journey in his prose anthology ‘Eksho Surje’ (In the 100th Sun) published by 'Notun Kobita' in the year of 2009. He’s the co-editor of magazines ‘Kabita Campus’, ‘Natun Kobita' for more than 10 years.

*Arka Chattopadhyay: He has a background in Literary Studies. After completing his BA, MA and Mphil in English literature from Presidency College and Jadavour University respectively, he has finished his PHD at the University of Western Sydney. Apart from being an academic literary critic, he wears the creative hat as a Bangla story writer, translator and essayist. He has been actively engaged in the Bengali Little Magazine movement for the last decade. He co-edits 'Ashtray', an online and print literary magazine and a section on 'Golpona' at 'Baak', one of the oldest webzines in Bengali. He has been translating contemporary poets and prose writers from Bengali to English and vice versa for 'Ashtray Online', 'Journey 90s', 'Nilgiri Wagon', 'Cafe Dissensus', 'Baak' as well as translation anthologies and 'Notun Kobita' website.

Few drops of “Ice Cream…With a Smile” which has created the space for me to reconstruct my own poems:

@3. On return the mushrooming ruby comes to mind was it round? rooound? can’t remember
(P-12)

@5. In this poor world, the crying one has a fair share of denim, the smiling one’s sky is elated in eight parts and the leaning one is only for 5-23, slow

@6. You thronged Shiuli-letters in returning songs; I was in a hurry and didn’t even have my eyes…

@9. She crossed the river cautiously, she sank only once

@13. There was indeed that “Meghetaburu” rain too, a downpour
Footsteps foreknowing how to sink   footfalls walked away with the rain  (P-48)

Ms. Runa Bandyopadhyay, from West Bengal, India, is a poet, writer and reviewer in Bengali language. She is the Scientific Officer in Bhabha Atomic Research Centre, Mumbai, India. As she herself says: "Philosophy, history and science are the subjective face of my poetry, but not the subject itself. I roll down from subject to wonder, to confusion of object in a centripetal travel. Weaving the truth of moments with silent tears, I start writing the alternative history of life-river. I like to review those books which trigger me to write my own poem in my own way." Her books include: poetry,  “Aseemer Khelaghor” (Playroom of Infinite), “Tamas Journal” (Journal of Darkness), “Poroborti Songbad” (The Next News ); reviews, “Antarbarti Pangkti” (Between the lines), “Tamoser Alokbhromon” (Light-travel of Darkness); and stories, “Parankotha” (Word of bosom), etc."