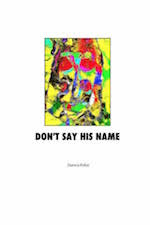 In Donna Kuhn’s chapbook, Don’t Say His Name, she expresses to the reader the same sense of chaos and disharmony that Donald Trump does every time he speaks or tweets his thoughts. The poems themselves are chaotic and edgy with the analysis of  situations that are difficult to understand or pin down. As I read the poems, I felt that Kuhn was using the same rhetorical devices of obfuscation that Donald Trump uses. The poems reflect her distaste, fear, and inability to relate to who and what Trump is as both a person and the President of the United States. The language sends out a sense of the fear that we have for this president, who is unable to give Kuhn (and myself) any sense of coherence or kindness. Thinking about Trump makes Kuhn feel uncomfortable, as it makes me feel uncomfortable, also.

In the poem, “DON’T SAY HIS NAME (WITH SPENCER SELBY),” Kuhn questions, as though looking for hope or answers:

let me imply misguided by now
it’s against my standards

the personal, art and is there
a drug for that?

he’s not our fucking father!
are you laughing at me?
at least i could express it my way
doomed; are we doomed?

She is expressing what many people are feeling; he is a monstrosity who cannot be dealt with in any rational way. Still, she expresses hope, although very little, when she asks “are we doomed?”

The poem, “DONALD TRUMP IS SO UNHAPPY,” gives the reader a glimpse of all the facets of Trump’s self. However, it is not clear who or what he is, as Kuhn leaves many of the lines unfinished and once again, there is no sense of coherence when she tries to describe Trump:

Kuhn ends the poem with these lines:

The reader is once again thrust into the confusion of identifying what is true and what is untrue. She effectively uses sound bites that can only suggest something to the reader.  Kuhn’s uses a style in these poems that emphasizes fear, confusion, and paralysis, which is very effectively used when describing Donald Trump.

Mary Kasimor has written poetry for many years. Her work has appeared in Big Bridge, 2River, Glasgow Review of Books, Nerve Lantern, 3 AM, Touch the Donkey, Posit, Yew Journal, and Otoliths. Her recent poetry collections are The Landfill Dancers (BlazeVox Books 2014) and Saint Pink (Moria Books 2015). Her chapbook, The Nature Store, will be published this spring by Dancing Girl Press. She has also been an reviewer of many small poetry press collections.