WE USED TO BE GENERALS by SARAH CAMPBELL 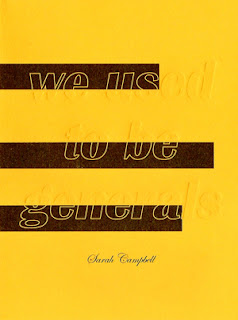 We Used to Be Generals by Sarah Campbell
(Further Other Book Works, Austin, TX, 2014)

I picked up this book partly because of its title: We Used to Be Generals. Right? It evokes that saying about when (real) men used to walk the earth, or something like that. Given the times, many of you might sense the same timely elegy ... For example, language. We used to have a leader who can riff off reading lists. Now we're ... well, but I haven't opened the book yet. Let me not bring an inappropriate or any preconception to Sarah Campbell's collection.

I read the first poem and, immediately, I'm lifted out of my doldrums. In fact, I swiftly replied with a bark of a laugh at

WHAT HAPPENS WHEN NOTHING HAPPENS

That's the poem in its entirety. Most of the poems are short. But their sparseness only heightens their punch. I love the acerbicness of


; the many mysteries--often delicious mysteries--in poems like "OPEN LETTER UNDER GROUND," "THE UNMET FRIEND," "FOX" or

Today it was true
That is that

Gave them yesterday too


; the evoked pursed lips of poems like "THERE THEY GO" or

Tears in the clouds
A moving cathedral of chairs

Ladies and Gentlemen
We are the traffic


; the raised-eyebrow sagacity of poems like "WHY I NEEDED AN ENEMY" or

Don't forget to write something I won't

The oldest trick in the book

THE TRAMPOLINE IN HIM


There are many more types of poems and moods evoked than what I note above--an admirable  testament to the expanse of a (merely) 51-page book. But variety alone reduces an assessment of its charm. It's also resonant for how the effects evoked in the reader can't be traced directly to the poems' actual words. The engagement with these poems remain a pleasure-inducing mystery. As well, it's a linguistic finesse one longs for when listening to certain politicians.

Interestingly, for me and this is just for me, I thought the title poem to be the weakest of the collection. But you go ahead and check out the book to agree or disagree with me as, meanwhile, you surely will enjoy the journey of reading it.

"Language acts sets at cocked angles," says Susan Howe, one of the book's blurbers. I can't improve on her summary.  I can only affirm her opinion as I share how much I enjoy Sarah Campbell's We Used to be Generals. Recommended Enthusiastically Recommended!


Eileen Tabios does not let her books be reviewed by Galatea Resurrects because she's its editor (the exception would be books that focus on other poets as well).  She is pleased, though, to point you elsewhere to recent reviews of her work: AMNESIA: Somebody's Memoir was recently reviewed by two Amazon Hall of Fame Reviewers: by Kevin Killian and by Grady Harp. She released three books and two chaps in 2016, and is scheduled to release at least that similar number in 2017. More info at http://eileenrtabios.com