AN AUTOBIOGRAPHY by PANAGIOTIS A. TSONIS 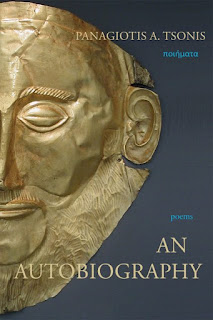 Sometimes, people ask how I choose which books to review for Galatea Resurrects. I usually—and honestly—reply that I don’t assign myself books to review. I just try to read as widely as I can and those books that move me to write a review end up being the ones I review. That’s that. But there are occasional exceptions to my approach. One way to become reviewed by me could be if my husband ends up laughing at the book cover. That’s what happened with Panagiotis A. Tsonis’ collection, AN AUTOBIOGRAPHY. Here’s Tom with Tsonis’ book cover (click on images to enlarge): 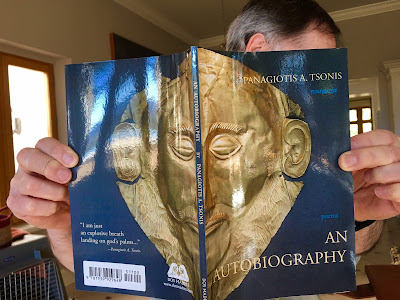 So what happened was I was moving around piles of Galatea’s review copies (they’re in the hundreds now!) and Tsonis’ book cover caught my husband’s eye. He asked, “Is that Agamemnon?” And then he laughed. Surprised, I asked, “Why are you laughing?” and then looked at the cover. I happen to think the cover is attractive and effective as book covers go.

Tom explained that the image on Tsonis’ cover was a gold death mask discovered by German archaeologist Heinrich Schliemann. Schliemann claimed the mask was Agamemnon’s. At this, Tom laughed again. He said, “Isn’t interesting that these folks discover something and they claim it’s of some famous king? It could have been a lawyer’s death mask, for all we know!”

The reference of lawyer, of course, is one of diminution—the opposite of elevation through, say, ascribing a royal background. Tom, by the way, is both an ancient Greek art scholar and a lawyer; the latter allows him to make lawyer jokes. And laugh we did at the consistency of "bigly" claims throughout history.

But the matter did make me take a second look at Tsonis’ poetry collection. I wondered about the relationship of the mask to the poems inside the book. In addition, I was intrigued by the title AN AUTOBIOGRAPHY since one of my hobbies is to question the notion of autobiography (you can read about said hobby through my chap HERE). (Auto)biographies are based on what are reported (including self-reported) and, quite often and as with the controversy over whether the gold death mask was truly Agamemnon’s, the reports falter before the truth.

Tsonis was born in Greece and so it’s logical for his poetry to reflect his birth land’s culture. But based on my read of his poem “A PHOTOGRAPH” (which begins “Bold eyes / Fixed / To eternity / Depicted on a / Golden mask / Of death”), the reference to or use of the mask is just a starting point, rather than the singular theme of the book. It is a starting point in that this is Tsonis’ first poetry book—there are hints he was about 60 years old when he wrote the poems in this book—and, thus, he looks back at his life to make his poems. By looking back, as noted in the poem’s ending:

…your eyes
Seem like seeds
Ready to transform gold
Into fiery beacons
To guide me home.

This could be to say, after traveling elsewhere (Japan and the United States), the poet shows that toward the end of his life he more treasures his homeland/home culture … or that he’s found a home through the writing of poetry. I note the latter’s possibility because the poems, themselves, are lovely accomplishments—in their own way, they are “gold” (“beacons”) shining out their wisdom and beauty. Here’s an example (click on images to enlarge), 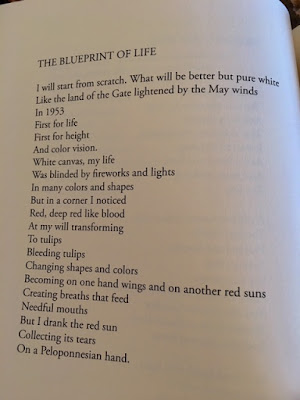 I appreciate the colorist’s eye and other aspects expanding the definition of “light” that occurs more than once in the book. But I also appreciate the wisdom—and, indeed, am relieved there is wisdom in this collection as it would be a bit of a shame if some wisdom didn’t surface from having lived a life. For example, in “THE STORY OF LOVE,” he notes (appropriately in my opinion)

The word Love
Is misunderstood
Because it’s used
Like ingredients
In a churn.
But is only
One spice.

About love’s constancy, he further notes:

Love is an angel
Without wings
Who doesn’t fly away.

Lovely. But, ultimately, what elevates the book is the tour de force poem “AUTOBIOGRAPHY.” Most of its lines begin with “I am” and here is its beginning: 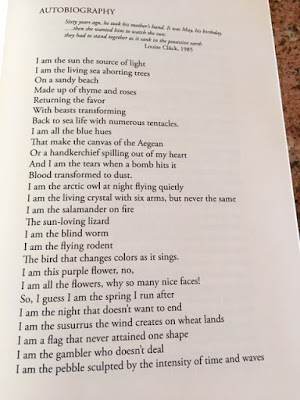 “AUTOBIOGRAPHY” is personal and universal, is local and global, is specific and general—it is, in one word, indigenous. It is a long poem that takes up eight pages in the book, which leads me to suggest that it would be a great project as an illustrated chap. Here’s another page-excerpt of its bounty: 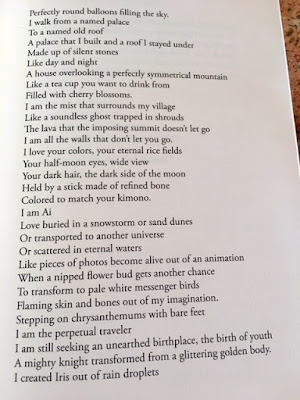 I am glad Tsonis wrote these poems, for they make me care about his life. The poems warrant the epigraph with which the poet chose to end his collection—the words of Ted Kooser:

How important it must be
to someone
that I am alive, and walking,
and I have written
these poems.
This morning the sun stood
right at the end of the road
and waited for me.

The book cover’s death mask is like life: paradoxical. The gold for treasure is appropriate. But what the poetry book created is not so much a death mask but a life mask. We can never know everything about the author based on what s/he wrote—but the mask, as presented by Tsonis’ poems, reflects a beautiful mind.


Eileen Tabios does not let her books be reviewed by Galatea Resurrects because she's its editor (the exception would be books that focus on other poets as well).  She is pleased, though, to point you elsewhere to recent reviews of her work: AMNESIA: Somebody's Memoir was recently reviewed by two Amazon Hall of Fame Reviewers: by Kevin Killian and by Grady Harp. She released three books and two chaps in 2016, and is scheduled to release at least that similar number in 2017. More info at http://eileenrtabios.com