CORING THE MOON by KENNETH FROST 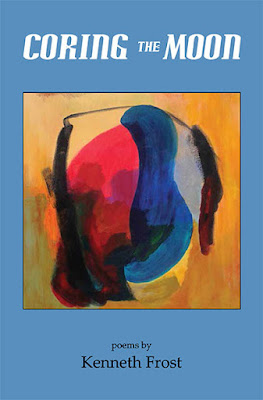 Kenneth Frost's poetry first crossed my radar in 2010 in the form of his first collection, Night Flight. It was a disconcerting, welcome sighting. In 2012 Main Street Rag Publishing Co. and Frost's wife, poet Carolyn Gelland, brought out his second collection, Time On Its Own, another neatly packaged little book, which contained poems just as affecting as the first. Coring the Moon, published in 2014, is a much larger collection that contains both of the first two books plus about a hundred and fifty more poems from an apparently vast storehouse of writings compiled over his lifetime.

Frost's poems are, in one way of saying it, a literary parallel of the visual arts' expressionism. The imagery – and the words themselves – fit together in ways so unconventional they can appear fragmented and illogical. Their fragmentation is an expression of what a particular moment in the mental and emotional world looks like to the poet. The  overall effect, sometimes kaleidoscopic, often funny, always peculiar, shares material with surrealism, which seeks to evoke the illogical logic of dreams.

This is difficult material for a poet to make work. And by “work” I mean to create a jolt of unfamiliar emotion or thought that looks incoherent but feels like it coheres. Exactly the wrong word occurs in exactly the right place. Unrelated images appear side by side by side, yet in the end feel related. Hart Crane in 1930 termed this baffling kind of coherence, in one description, “the logic of metaphor.” Tens of thousands of poets have labored with it over the last roughly eighty or a hundred years; the vast majority ended up mainly with incoherence.

Kenneth Frost is one of the exceptions. A straightforward example from “Coring the Moon” is “February, Maine,” in its entirety:

If you've ever watched a February afternoon in Maine – or anywhere cold – creep past your living room window, you know exactly what this nonsense means.

Almost all of Frost's poems are tersely stated like this, and if you're not in the right frame of mind, just one or two of them may not be enough to generate the atmosphere of surreality or starlight the poems all target. But the effect is cumulative: Six or eight or ten short poems into any part of the collection, you find yourself occupying a state of mind that would seem wholly coherent in a dream, but dangerously confusing if you were trying to drive a car.

What intersection of light
and cerebral energy
diagrams
the afterglow
of a dream,
carries
the traces of a face,
the timbre of a voice
and not the voice?

The answer (I think) is: a poem. “Coring the Moon” offers us a healthy selection of this mind-bending intersection of light and language, composed over Kenneth Frost's lifetime.

He was born in New York City in 1928, and suffered injuries in combat during the Korean War which took years to recover from. He afterward taught literature and writing at the New School and Columbia University in New York, and later moved with Gelland to Wilton, Maine, which was his home at the time of his death in 2011.

Coring the Moon is available through Main Street Rag's online bookstore at mainstreetrag.com/bookstore/. Carolyn Gelland's illuminating explication of some of Frost's poems, “Words in Orbit,” appeared in Notre Dame Review Summer/Fall 2016 and is available online at ndreview.nd.edu/assets/205468/gelland_review.pdf.

Dana Wilde's reviews of poetry and fiction by Maine writers appear regularly in the Off Radar column in the centralmaine.com newspapers. Hisrecent book is Summer to Fall: Notes and Numina from the Maine Woods.