WATERS OF by BILLIE CHERNICOFF 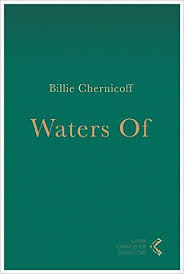 USAmerican poetry since the early 20th century has been defined by a recognition of loss. Perhaps it has always resonated with loss, the verse of those early, orphaned colonists squatting in the wilderness haunted by the threat of the return of their own violence out of the shadows.  Since about 1913, though, with the publication of H.D.’s ground changing poems in Harriet Monroe’s Poetry Chicago, that loss has been defined by both a profound nostalgia for a lost world and a courageous engagement with language in the quest, if not to rediscover it, then at least to keep its sense alive in fleeting linguistic intensities. As Jack Spicer wrote: “I said ‘Afternoon’ / But it wasn’t there. / The afternoon was another thing / which had gone somewhere.” Now it’s not in his poem.
The exception, of course, is Emily Dickinson who was on the job first, and covered that ground of loss/lost ground with a fearless brilliance that alternately dumbfounded and scared the hell out of her first editors who made it their job to hide it behind chintz curtains and cover it with crocheted antimacassars. H.D. read Dickinson poems with great interest, even though she had the 1924 edition where the poems are domesticated into predictable sentimental thematic categories (Life, Nature, Love, Time and Eternity, etc.) and edited into smooth regular ditties whose rhythms negate the knowledge embedded in her daring prosodic innovations. Of course, even the most Calvinist of editors couldn’t completely erase Dickinson’s subversive brilliance in its repeated recognition of the loss at the heart of our condition, but you have to wonder how the Dickenson we now have would have affected H.D.’s writing.
H.D. and her peers – Stevens, Pound, Williams, Loy and the others – faced the same condition Dickinson did, but more so. They responded by locating with their poetry ranges of knowledge and experience that previously had been the reserve of the sacred which had been skewered, flayed, dissected, bulldozed and buried by the juggernaut of modernity, leaving the world transformed into a natural resource, a fact suitable for consumption as object by us subjects, and heaven transformed into metaphor for erotic bliss.
If they couldn’t quite accomplish the great task of redeeming the world from that loss, they could at least recreate the struggle for it as an almost workable substitute. Wallace Stevens’ “Sunday Morning” came to mind reading “Pulsatilla” early in Billie Chernicoff’s Waters of:

An angel kneeling
foretells
without a doubt
heresy;
a book not yet written

She draws her heart around her.
Soaked from all directions
coat, book, even the sky ruined.

Gargoyles gush for us sinners now.

Chernicoff articulates the same sense of loss as Stevens (coat, book, even the sky ruined), but turns it away from the perfect metrical satisfaction that Stevens’ offers as part of the poem’s compensation toward “a book not yet written.” The simplicity of her vocabulary and the immaculate, broken pacing of the lines refuse to settle into any kind of compensatory event. Gothic gargoyles weep, the cathedrals themselves mourning the loss. Her lines are an unsettled sounding, a distant but immediate echo of Dickinson’s fearless spiritual inquisition and celebratory quest.
What’s been lost to us, never to return, is a stable sense of meaning firmly grounded in a formalized relation to what’s always beyond us. Call it “God” or “the transcendental” or “Zion.” The loss haunted Dickinson’s interrogation of death and her forays into the luminosity of the quotidian, our new home. As Dickinson put it:
I tie my Hat—I crease my Shawl—
Life's little duties do—precisely—
As the very least
Were infinite—to me—

For Chernicoff, that quotidian is amplified in the strange beauty of unexpected expansive connections that stutter out meaning. “Waters of”, with its haunting, broken off evocation of Psalm 137, opens over and over into further instances that move from drops (“A drop is a small ocean” as Emerson said) to sea to tears to saliva to a sweaty crotch. If the emphasis is on the fluids of the “body”, the sea is in them all. We are, after all, “ugly bags of water” as the crystal alien described us in Star Trek, Next Generation. But it is still the “body”, which is our precious home.
If these poems weep for Zion, the tears are nourishing as well as mourning; they water the (non)ground they fall on and do so with a celebration of our earthly, finite being and its specific modes of relation which are no less than angelic in their immaculate finitude, as in “Then As Now”:
Things become more
eloquent, if you’re lucky
by lucky I mean listening.
Things become more so
like a husband.

The complexity of Chernicoff’s languagethinking is a joy. The presence of “husband” floods our sense of the expansive potentiality of attention with the almost invisible ambivalent plenitude of our domestic reality. “The meal in the firkin; the milk in the pan; the ballad in the street; the news of the boat; the glance of the eye; the form and gait of the body,” as Emerson so eloquently put it in his claim for the ultimate significance of the ordinary and common, ending of course with the body. The husband, intimately familiar, but always more and other, the body next to you in your most exposed moments, the sign of a trust that is beyond question but always in question given your fatally exposed fragility, that precarious balance, is the figure of our new condition, our crippled spiritual beauty. Our writing.
“I call it a sermon,” she goes on (referring to John Donne, but also the poem itself), “but mean a play.” A play on words, perhaps? This book and these poems eloquently do both and more. Sermon, out of the Latin sermonem, “common talk,” “conversation,” comes from the Indo-European root meaning “to line up,” “to join.” As a discourse on a text of “scripture,” itself a wordplace of unstable sense mixing up writing and the divine, a sermon lines up words in a way not unlike a play in its internal dynamics. A play though, takes writing in a different, if not unrelated, direction, itself mixing up multiple senses in a little whirlwind of meanings. Some 200 years before it became associated with a genre of writing, play was linked to “free or unimpeded movement,” so that “a play,” as either a noun or a broken phrase, is tied in a deep sense to the realm of children where the unexpected move itself brings delight free of purposive direction.
It may not be fair to push the comparison with Stevens’, but something in Chernicoff’s “lining up of words” calls into question the kind of lyricism that Stevens’ mobilizes, even when he is describing ambiguous undulations. There is no such compensatory swooping in Chernicoff’s spare lines:
Elsewhere Bach
a Partita
roves, her eye

too bright to know
who is staying
and who is going

There is only the resistance
of the string, an infinitesimal catch
like tenderness in a voice.

The difference between Williams and Stevens may have had to do with whether you spent your time hanging out with pregnant Polish farmer’s wives or actuaries. The difference between H.D. and Stevens may have had to do with whether you (imaginally) hung out in Egypt or Florida. Chernicoff’s work has a debt to both Williams’ Polish farm wives and H.D.’s Egypt. The sounding of the poems is utterly common and at the same time rooted in a mythic intuition that in-forms every syllable. The precision of the movement of the phonemes locates us moving in relation to the fact of the infinitesimal scratch, the resistance of horsehair on stretched gut, that composes the magnificence of Bach’s Partita. This is part of what Robert Kelly refers to in his preface to the book as the “hesitant, graceful music” that she converts “into a visual apprehension of physical movement.”
That physical movement is the very stuff of our Zion. Michel Deguy, in his discussion of this condition of loss (A Man of Little Faith), calls it transcendence as opposed to the transcendent:
There is no transcendent, but there is transcendence; movement; being carried away; movement, momentum, élan in French, ormê in Longinus: the invention of an overlook, of the sheer and steep (upsos), of the point-from-which. This is what gives meaning, makes meaning, in the sense of a sense.
This is another way of speaking to our entanglement with time, that supreme mystery, which itself is entangled with that other mystery which Chernicoff has as bone’s language. As with Dickinson, Chernicoff repeatedly comes back to the question What else is there? It explicitly haunts “Then As Now” which opens with the buzz of “a fly between / window, screen,” summoning another fly: “I heard a fly buzz – when I died.” That is an entanglement of times and minds moving together in an exquisite dance, a dance that limns a world of luminous finitude. What else is there is not a cry of despair, even though it leads through a stony field, but a lucky opening into our precious entanglements, and an injunction to pay attention.
In the last section of the book, “Bronze,” Chernicoff writes a series of what she calls meditations on ancient Chinese bronzes that weave in and out of the moment of their creation linking it to her own thinking and the world of our common loss. Bronze has a powerful and  complex history. The first metal alloy, its invention marked the onset of a whole new chapter of human history in both East and West. Because of its properties and the method of its creation, it also became an image of a spiritual process, especially in China where it was central to the development of a school of Taoist alchemical thought. As an alloy, it is nether this nor that, but both in a new manifestation, a new form. In that sense, it is a marriage and carries with it the mysteries of marriage. The process of marrying copper and tin involves stages of purification, integration, and actualization. These names then become part of the thinking of a process of spiritual transformation which is integral to physis.
5.
It turns out harder than you think.
Not gold, gold’s a thin skin.
Bronze, remember, extends
itself, arches its tail,
muscle tight to the bone.
Noon, a sly, bright
stroke of luck.

Each line marries multiple senses in a hard language, muscle tight to the bone, bone’s language. “If I may take the weight of bronze/and sate my wretched fingers,” H.D. wrote in “Red Roses for Bronze” celebrating the physical entanglements of the extended world, the sensuality of gnosis. Chernicoff gives it to us in the light of noon, but immediately qualifies that as a stroke of luck, luck being, we know, listening which, Jean-Luc Nancy tells us in Listening, has to do with sense as sonority, a physical but invisible vibration of meaning, rather than a message. We are back to Robert Kelly’s observation, then, and the physicality of this sounding, the weight to sate our wretched fingers. Beautiful and mysterious in the extreme, these poems are messages from the borderline offered as testimony to the thrilling precariousness of our spiritual adventure. “The messenger,” Chernicoff writes, “both hears and bears / annunciates / a green columnar / throat full.”
*****

Michael Boughn's most recent book is City -- A Poem from the End of the World (Spuyten Duyvil, 2016). He is currently an editor at the website, Dispatches from the Poetry Wars, and is at work on a new book called The Book of Uncertain -- A Manual. http://dispatchespoetry.com/home/recent/news