THE MUSIC CHILD & THE MAHJONG QUEEN by ALFRED A. YUSON 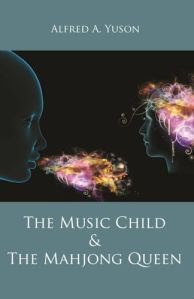 The Music Child & The Mahjong Queen by Alfred A. Yuson
(Anvil Publishing, Philippines, 2016)

Here’s one way to benefit from poet-novelist Alfred A. Yuson’s The Music Child & The Mahjong Queen: look up all of the musical references, by which I mean, listen to the cited music. The experience—one of many lessons within the novel—suffices for making the book a worthwhile read (I’m listening to Heitor Villa-Lobos’s “Bachianas Brasileiras No. 5” as I write this review) and I suppose that would make sense given its title. But I also was reminded of Diane di Prima’s essay “Some Words About the Poem” (The Poetry Deal, City Lights, 2014) wherein she—and Ezra Pound—say,

I note the references to bodily involvement which came to mind because of The Music Child & The Mahjong Queen’s unusual protagonists: Luisito whose singing ability includes the ability to mimic anything—from opera to the migration of birds to the various sound of the sea—and Vilma who masters mahjong because of angels enabling her to accurately assess and foretell from sounds (“I hear the rustle of bamboo and I know how many sticks there are”).

Their stories—including meeting and engagement with each other—are certainly fantabulous, but are contextualized in unfortunately quite realistic scenarios of environmental decimation, poverty, political duplicity, diaspora and the Marcos dictatorship. Indeed, in something that doesn't actually relate to the novel's narrative unless one accepts the erasure of the wall between fiction and non-fiction, there's a character named "Emmanuel Lacaba" who, Yuson says in the "Notes" section in the back of the book, refers to "the Filipino poet Emmanuel A.F. Lacaba, who joined the rebels in the mountains at the height of Martial Law that was declared by Ferdinand E. Marcos and who in 1976, at the age of 27, was slain by military forces after an encounter on the island of Mindanao." The character is a minor character for the novel's purposes, but the presentation of Lacaba's haiku is a necessary pause to, and subtle nuance for, the novel's plot:


In puddles and rivers

Before targets are drawn.

The realistic references emanate, of course, from real-life circumstances in the Philippines—no doubt something that Yuson, like his protagonist journalist Lawrence Blume, has had much chance to research and investigate. The ending to both the story and this Philippine history has not been written yet (the latter perhaps because there is no end to history). Given the current state of Philippine affairs, there’s much that’s depressing. Yet the “ending” to Yuson’s novel, while open-ended actually, is not dire. It is an ending that lapses to Poetry—a good strategy when things are actually unknown and/or in flux. Here are the novel’s last words—which I can share as there’s no equivalent of “The butler did it” here—a dialogue between Vilma and Luisito:

“I do not sing. Except when offered chrysantheme.”

“Then take my hands. Touch my fingers. Do you feel the flowers?”

That ending was earned by a prior presentation of a poetic suite, “Islands of Words,” written by Luisito—who had by then mostly traded in his singing for writing poetry—in which a tale of invasions and the inevitable bow to more powerful invaders resulted in the occupied people being forced to take on the invaders’ language. Yet, ultimately, expertise in the invaders’ language does not prevent “the first lullabies [from] being heard” such that even the invading “large men so pale put them down on paper.” That latter reference is sly (and humorous) as “Islands of Words,” which is inserted seamlessly within the novel’s narrative, presents an indigenous mythology.

“Islands of Words” also hearkens the history of English for the Philippines in addition to contemporary cultural production—including the focus on indigenous culture—which has involved recovery and affirmation of precolonial times. Finally, “Islands of Words” may be considered an allegory for Luisito’s and Vilma’s lives—to have begun with invasion and colonization of a different sort early in their lives but to now have lives together where they enjoy and practice their gifts. Surely Luisito will sing to Vilma as she strokes him with fingers perfumed by all of the universe’s flowers that angels may bring to her?

(Thus,) unexpectedly and significantly, I closed the book with a sense of joy. Such a dire history from which Luisito and Vilma surface. Such fraught frustration experienced by Lawrence Blume whose own personal relationship would not survive. How did I react with joy? Because Yuson’s writing—straightforward, experimental, lyrical—is resonant and I am moved. Because Yuson’s story is hopeful and I am persuaded to take his lead. In recent times—or my recent reads—I’ve not found it common to respond to a novel with a sense of optimism. I believe that to be a feat. Nor do I believe that sense is fiction.  From the Philippines’ complicated and often troubled history, after all, surfaces this novel—and it is treasure.

Concurrently as I wrote this review, I listened to several versions of Villa-Lobos’s “Bachianas Brasileiras No. 5”—the choice by which Luisito recovered his singing voice—viz a YouTUBE binge. This allows me, too, to list the versions I heard in my order of preference (though, truthfully, several of the positions are interchangeable):

But, first and foremost, my thanks to the author Alfred A. Yuson for the experience of this novel and the effects it engenders (including the above evening with sopranos)—all the more pleasing for being unexpected. By taking a poetic strategy to the novel, he made the form fresh—he made it new.

I hope this novel is able to receive additional publishing support with effective marketing & distribution past the Philippines' borders. This novel deserves to be read globally, and not just by Filipinos who continue to suffer so much from their “leadership.” RECOMMENDED.

Eileen Tabios is the editor of Galatea Resurrects. Her 2017 poetry releases, to date, include two books, two booklets and three poetry chaps. More info at http://eileenrtabios.com