HUMPTY DRUMPFTY AND OTHER POEMS by MELINDA LUISA DE JESUS 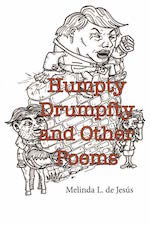 Melinda Luisa de Jesús’ Humpty Drumpfty and Other Poems is one of the chaps in Moria Books’ Locofo chap series which intends to produce 100 chaps during the first 100 days of the new presidential administration. The series is anti-No. 45, and publisher William Allegrezza had noted (in his submission calls) that a manuscript from 5-25 pages would fulfill a chap’s (logistical page-count) requirements. de Jesús chap contains exactly five pages of poetry, suggesting that the project indeed was created specifically for Locofo.

But it doesn’t require more than five pages of poems for de Jesús to convey the deep distress and protest the author feels in response to No. 45, or, as she put it, “45’s fuckery.” For instance, No. 45’s self-aggrandizing rhetoric, by now, has been witnessed by many—but if you need a reminder, here’s de Jesús:

The way you keep
demanding your
ownership of
asserting your
dominion over
the land
the water
women’s bodies
the will of the people.
What will you claim next—the air?

Just know
The gods are watching...

The poem could have ended with the last line of the second stanza: “What will you claim next—the air?” as the question itself reveals No. 45’s ludicrous stance in attempting “dominion over / the land / the water…” and so on.  It’s interesting, though, to consider the significance of the last couplet. Certainly, the uncertainty it presents make it an effective ending, too, for the poem. For one cannot know if that couplet bespeaks the poet’s wishful thinking, a warning, or even an “alternative fact.” And if the latter, the alternative to the fact could be that it’s No. 45’s fellow humans/U.S.-Americans doing the watching, or that No. 45 in his hubris would not be able to manage “know”ing that “gods”—of which he is not one—“are watching.”

The poem “Humpty Drumpfty” is both powerful and funny and attests to de Jesús’ poetic prowess—not many can pull off humor in the service of a political narrative that presents “some nice Mexican dudes down at the Home Depot” building a wall that “seemed to move / a few feet north / day after day” until the border it defined had migrated sufficiently south to Canada, thus erasing the U.S. That, is wit brilliantly deployed.

When one looks at de Jesús’ poem “Neocolonial,” one might glean a source (or part of the source) to the poet’s anger.  The poem, dedicated to “… Filipino Americans who voted for” No. 45 parses the delusional perspectives of Filipino Americans who, despite having had “our nationalist movement squashed, kidnapped then beaten into accepting the imperialist’s racist wet dream,” still believe they are “an asset”:

But have you looked in the mirror lately?
Your politics may say “white”
but your skin reads: illegal/terrorist/unwanted/inferior

The poem then continues to note,

Isn’t it time we stopped doing the white man’s work?

This is to say, de Jesús (also a scholar, professor and editor of Pinay Power: Peminist Critical Theory which is the first anthology of Filipia/American feminisms) brings a particular history—of her people—to confronting No. 45’s rhetoric and administration. The rage seems doubled. It’s not just anger at the specifics of No. 45’s acts, but the acts as well trigger historical problematics. For example, the Philippines’ inability to create enough opportunities for its population has led to a brain drain and diaspora that’s seen many people lapse into the role of “grateful houseboys, nannies, maids, sex workers.” The all of it creates a potent poetry in protest against No. 45.

So be it.  And, hopefully, “the gods are watching.”  This was my (welcome) introduction to de Jesús’ poems and I recommend you read them as I did to be moved by their raw-ed intelligence. (Locofo provides a free .pdf read HERE.) They may not be worth the price of No. 45’s ascendance (what poem can be?), but they achieve what they intend and what Locofo intends: protest and insight.  The latter is encapsulated in the last poem:

Ding, dong, dell
Donny’s in the well.
Who put him there?
The people, motherfuckers.
The people.