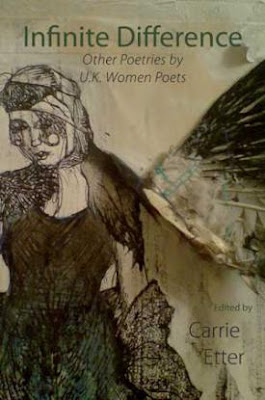 Carrie Etter says it’s counterproductive to try to categorize a poem as either 1) traditional/mainstream or 2) experimental/Avant Garde. Things are blurrier than that, which is a good thing. Instead she calls non-mainstream the “Other”.

Etter’s lively introduction to the anthology includes her take on the poetic politics circa 2010.
It can be read online at the Shearman’s site (as a PDF excerpt). The link also provides the list of 25 poets included in the anthology. Etter’s well referenced and persuasive arguments call for making poetry more inclusive, more broadly-defined. She encourages us to loosen up on the ways we approach poetry, to view it as a “spectrum holding infinite points of difference”. She explains why and how she organized the anthology and made her selections (and why women-only).

The anthology is an excellent resource for learning about this “Other”.  There are usually 3 or 4 poems from each poet; and each poet provides her own writer’s statement. These idiosyncratic self descriptions are valuable, giving a sense of what’s important to each woman.  This helped me respond to their poems.  I noted with interest how several used the word “lyric” when describing their poetry (and yet resisted traditional definitions that usually have a specific “I” as speaker), often keeping the connection of “lyric” to music – the music of the body, its movement and sounds.

“I work with what feels like the music—or pitch—of language, the visceral sense that it calls you out, makes you ring like a tuning fork. Working in a silence, full of noise and word arrivals, frequencies, poetries take place. A passage of writing that remains as open as I can make it in that moment to unknowing, curiosity, thought, breath. Such a calling out is social, interpellative …”

Making a poem deliberately “open” so that the reader must decide themselves how to interpret the poem – what meaning to ascribe, how to respond – seems to be a common objective in this anthology. Somewhat paradoxically, the poets are nevertheless serious and particular about the choice of subjects and themes which they use as inspiration or source material.  They often seem intent on confronting political and societal concerns (the environment, women’s lives, war) – but also confounding us, because their poems refuse to be clear or easy. And I suppose there’s a form-follow-function justice to that.

Many of the poets cited other poets who have influenced them, and performative, multi-media or translation projects they have done – such as collaborations (or inspired by) with the visual arts, music.

Most briefly commented on techniques they used, such as ­fragments & unusual juxtapositions, syntax, collage, gaps, form, line breaks, text sources, the look on the page, translation etc. I found it useful to know that many of the poets deliberately construct their poems to obscure the meaning from original source texts – this shakes the reader out of habitual reactions to words and phrases and the reader has to decide if and how they will engage with the poem. For more discussions and examples of techniques, here are two which I have personally used and found helpful: an essay on Jacket 2 and the free on-line MOOC ModPo.

But back to Infinite Difference—after each poet’s poems, there is a short bio. All the poets have UK connections but many arrived from elsewhere. There are a couple of people born in Canada. Some from the USA, including the editor. And other countries.  Several (most?) have lots of formal education credentials, and are teachers or professors.  Some had science backgrounds. But there’s the whole spectrum of ages, experiences, interests, stage in their writing career, collaborations etc. —which of course helps to strengthen Etter’s case about infinite differences—and hence infinite combinations and possibilities.

Here’s an example of technique in the anthology that I found intriguing.

Isobel Armstrong has a sequence of 3 titled Second, Third and Fourth Desert Collage, respectively. The subtitles hint at the text sources by providing names of a man and a woman (John C. Van Dyke and Gertrude Bell) and that they are combined, but we are not told what words are from which source, or how Armstrong chooses what to keep or in what order. I knew nothing about these two people I googled. The American Van Dyke travelled in the Colorado deserts, and Bell who was British adventured throughout Arabian desert … both in a similar time period, both eccentrics.

The re-selecting/ discarding of text continues, with the poems getting shorter and shorter, until we are left  at the end of the “Fourth Desert Collage”  with this single line of mirrored words with gaps:

The poem sequence works for me on its own. I sensed that it’s from a past time in history and that these deserts are  dangerous places. The overall effect of the 5 pages of 3 poems is rather like a desert sand storm, catching glimpses of scenes and emotions being played out like an old film.  The whittling down of the words to the final stark line is an imaginative way to show how two separate stories can come down in the end to the same thing: death. As a reader I did not need to know the back stories (though I was curious and glad that I googled).

Another poet Claire Crowther stresses that for her it’s all about the line breaks. She says that “Shaping, sorting, clumping and cutting line-making connected words give far more than the individual words could be …” She thinks of herself as having “perceptual dyslexia” and doesn’t really understand “the usual narratives” but does the best she can. Even though others have sometimes called her poetry “fractured, strange, nonsensical”, poems are for her “word ladders” —the “equivalent of an unlined world, as sturdy as I can make them.”

She has 4 poems in the anthology. My favourite of the whole anthology is her “Young Woman with Scythe”. I like her choice of words, its music, and its compact shape, and yes, its sturdiness and what strikes me as a confident tone in a dangerous world. It’s one of the shortest poems in the book, so I will include the whole thing:

As if soil was noise, the legal notice
shivered on the barrow, Louise tore off
her scything gloves. High on a pine, wild
parakeets, harbingers of change
in our climate, stared from their margin, chattered
about apocalypse. Carefully, eking
out a holiday, I watered plants.
That’s my dialect of territory
against the elocution of possession.
I looked for so long at Louise’s face,
that, in the bedroom mirror, it smoothed mine.

Poetry that can seem “difficult” is some ways but still be enjoyed is nothing new. For example there’s Emily Dickinson. In my old copy of Final Harvest Emily Dickinson’s Poems- selections and introduction by Thomas H. Johnson (Little Brown & Co, 1961), Johnson writes

“Her manner of writing helps give assurance of the infinite adaptability of writing. An innovator is necessarily unorthodox, and Dickinson’s syntax forces the reader to unexpected levels of concept. She uses dashes as a musical device and capital letters as a means of emphasis. Her readers are now gradually accommodating themselves to such eccentricities since they know [she] …deliberately fractured grammar to achieve special effects ...”

And in his The Poem is You – 60 Contemporary American Poems and How to Read Them (Harvard Univ. Press, 2016), Stephen Burt (like Etter) showcases the diversity of recent poetry. He says poems take on at least one of two main tasks. Sometimes they do both. The first task is to “let us imagine someone else’s interior life. The second goal is less traditional, but just as important. Less about providing information or telling a story.  Poems “can make language strange; that can reveal or upend the assumptions or habits that go without saying when we use language in less unusual ways  ... it means to keep the language and the world weird, either to keep us alert to the social, political and economic problems that make the world worse than it could be or else just sharpen our sense of what we hear and see…”

Some of the poems in Infinite Difference have unusual shapes and formatting on the page, so “seeing” them helps a reader decide how to respond. But I can imagine getting extra enjoyment from many of the poems in this anthology by listening to them being read aloud or performed. The  music of a voice and a moving human body would add layers of appreciation, I think. The effect might be a bit like listening to an opera or the symphony.

The anthology is a treasure trove for anyone wanting to learn more, and better appreciate “other” poetry. And true to Etter’s spectrum definition, this anthology provides a varied and broad spectrum-within-the-spectrum of “other” poetries. And I’m very aware that I’ve only given you two examples of (or from) actual poems—which I know is not enough, but I don’t want to make this engagement of mine any longer. I’ll just say that one needs to read the whole book to appreciate the scope of what’s possible—which is probably the point of the book.

I don’t know enough to comment on whether non-mainstream poetries by women are better represented now in the big prizes and getting published compared to how Etter described the challenges faced in 2010. The publisher Shearsman and the editor/poet Carrie Etter are both well known and active in the UK scene. Of the 25 featured poets, I recognize several names but I haven’t done a search to see what they are all currently doing as of early 2017.

After reading the poems, and about the poets in Infinite Differences, I feel that one of the main ways for “Other” poetries to be enjoyed, accepted more widely – and to encourage poets – is through innovative collaborations and performances.

One example is The Enemies Project based in the UK but with projects and events worldwide.
http://www.theenemiesproject.com/about/

Another example - The Poetry Society encourages collaborations and innovations with a major prize - http://poetrysociety.org.uk/competitions/ted-hughes-award/examples-of-new-work/

We live in chaotic times. The challenges of diversity, inclusion and being open to the “Other” are everywhere. The issues we face with racism, immigration, poverty, gender issues, climate change, species extinction – all these things are connected, and any solutions will be connected too.  Sometimes to get unstuck, we need to see things in new ways, before we can move ahead – being surprised, or puzzled, deciding to spend time with a non-straightforward poem and do the work of responding to it. And this anthology Infinite Difference is a reminder of how something that is a bit (or a lot) different or unexpected or hard to decipher – can help us stay awake.