THE HAPPY END / ALL WELCOME by MONICA DE LA TORRE 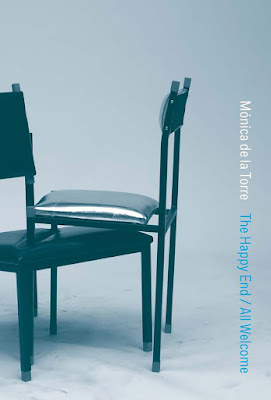 Okay. This quickly disintegrated into a depressing read for me. But, first, I should explain the subjectivity of that “me.” I am the mother of a college student in the thick of looking for a summer job/internship. Our entire family is conscious that not too far from today, he will be looking for a more permanent, post-graduation job. So, yes, Monica de la Torre’s The Happy End / All Welcome is depressing for its focus on (among other things) the job hunt and, as is typical for many entry-level jobs, the compromised lifestyles of slugging through a job.

“Table 17,” for example, shows the randomness of landing a job—there’s not necessarily a direct correlation between most qualified to receiving the position. “Table 17” offers a dialogue between a “RECRUITER” and a “WORKER”:

(She remembers the orientation session in which talent scouts were told to employ, at the drop of a hat, anyone whose use of language might increase activity in audiences’ corrugator muscles or do the opposite, prompting zygomatic tension.)

But in this case, how does one prepare to be the candidate who “might increase activity in audiences’ corrugator muscles or do the opposite, prompting zygomatic tension”? Poor son…

“Career Track,” on the other hand, offers this question once a job has been landed:

“Have you ever felt that your work hasn’t, as you had hoped turned out to be a prelude to some higher position, but rather that you’ve been pushed out of it into something lower?”

That reminds me of when, years ago, I languished at the bottom of a corporate ladder. For months, I’d wake up in the morning and my first thought to greet the day (occasionally second, after the thought “Coffee!”) was, “I hate my life.”

Elevating the poems are de la Torre’s sharpness in observation:

“Individuals in dead offices are workers.

Individuals in living offices are human performers.”
—from “YES OR NO”

When one works in a huge bureaucracy—actually, this can happen in non bigly organizations, too … SAD—efficiency suffers. In “Table 41” is this excerpt, which says something about language and the effectiveness of what is referenced by said language:

“COMPANY MANAGER:
What do you suggest?

CONSULTANT:
It would be my honor to devise a business plan for your company that meets everyone’s needs. For that, I would conduct private interviews with your staffers. There is no one-size-fits-all solution, especially when it comes to something as personal as sublimation. I mean, ultimately that’s what is at stake.”

The answer sounds reasonable on surface, but could well be obfuscatory. I wouldn’t hire someone who gave me those words in a job interview. But I do believe folks like that manage to gain employment.

Indeed, the poem aptly addresses bureaucracy, including bureaucratic language. Suffer with me, Dear Reader, through the deadening bureaucratese of 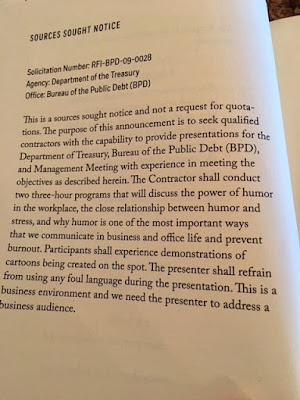 I paused for a coffee break before continuing to write this review, so as not to let depression prevent me from eliding the strengths of this collection, e.g. wit, as indicated by such titles as “VIEW FROM AN AERON CHAIR,” “VIEW FROM A DODO CHAIR,” “VIEW FROM AN UTRECHT CHAIR” and “VIEW FROM A FOLDING CHAIR.” The titles are witty because the poems are situated to be unfolding within a job fair. This reflects how the poet says her collection is “[a]fter Martin Kippenberger’s installation ‘The Happy End of Franz Kafka’s Amerika’ (an assortment of numbered tables and office desks with pairs of mismatched chairs within a soccer field flanked by grandstands) which references a giant job fair held by the Nature Theater of Oklahoma in Kafka’s unfinished Amerika…” Such partly leads to an organic structure of poems titled by the types of chairs as well as the numbers on tables (e.g. “Table 41”)—allowing the poet to riff on different ways /types of job interviews. The results display admirable expanse, from being funny (e.g. “Table 25”) to subversive (e.g., “GUERILLA ADVERTISER POSITION”) to (to quote from the poem itself) “tenderly sardonic” (i.e. “AD COPY”).

There’s also a series of “Case Study” poems that are dream-like, if not odd (despite the matter-of-fact tone): 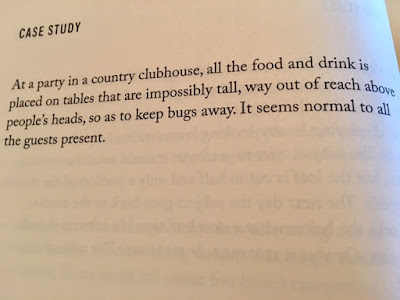 Relatedly, de la Torre’s eye is lucid from such lines as

“A vague interior finds in an exterior specific correlation.”
—from “DESCRIBE WHAT COLOR IS NOT”

“Red nails once stood for status.

Now it’s Be a Dahlia Won’t You? The Thrill of Brazil, Yucatan if U ant, I’m Not Really A Waitress.

Or the mimicking of natural nails.”
—from “YOUR FORECAST HERE”

Let me further exchange depression for appreciation by noting the presence of prescience (sorry, couldn’t resist the alliteration) in this book. I assume, for example, that these poems were written before the current administration. But in “YES OR NO,” de la Torre explains the merits of Rump=ian walls:

Such a shame since a border of plants could at least elevate elevate the landscape.

How then to end this review? the reviewer wonders, scratching her itchy head. How about, then, with the last line of the last poem—it’s what can result from a deadening experience, like a process where its success does not guarantee  happiness (e.g., job hunt), or when someone doesn’t want to do his job well (certain heads of state): from “OK, THIS IS IT”:

“The next one up is in made-up tongues.”

Eileen Tabios does not let her books be reviewed by Galatea Resurrects because she's its editor (the exception would be books that focus on other poets as well).  She is pleased, though, to point you elsewhere to recent reviews of her work: SILK EGG: Collected Novels 2009-2009 was reviewed by Aloysiusi Polintan for Renaissance of a Notebook; The Gilded Age of Kickstarters was engaged by Jim McCrary for The Halo-Halo Review; and ECSTATIC MUTATIONS was engaged by Aloysiusi Polintan for Renaissance of a Notebook. To date in 2017, she has released two books, two booklets and three poetry chaps. More info at http://eileenrtabios.com