A CAPACIOUS ACT by CHARLES A. PERRONE 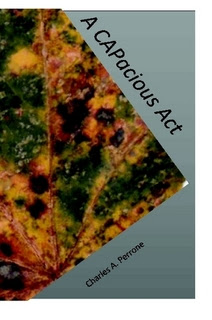 While reading Charles Perrone’s new chapbook, A CAPacious Act, my news feed was overwhelmed by alerts about immigration raids being conducted in cities across the country, where hundreds of undocumented immigrants were arrested by Immigration and Customs Enforcement (ICE) agents. This coming just weeks after Trump’s Muslim Ban that denied entry to immigrants, some green card holders, and refugees from majority Muslim countries. About the raids, ICE officials stated that they were simply rounding up immigrants accused of committing crimes, dangerous individuals who posed a threat to national security, just as Trump officials had claimed the Muslim Ban was not based on religion but on national security, even though it allowed entry from Saudi Arabia, from which 15 of the 9/11 highjackers came. Rounded up in the ICE raids were “criminals” like a Salvadoran asylum seeker who was taken from the hospital where she was receiving treatment for cancer, and a legal immigrant protected under the Deferred Action for Childhood Arrivals act. And among those threats barred entry into the U.S. under Trump’s Muslim Ban were visa-holding translators who risked their lives and families to assist U.S. troops in Iraq and Afghanistan. Both national security claims belie the underlying xenophobia and racism that drive Trump and his cohort of white nationalist policy advisors, both play with language to the detriment of bodies pressed under their their ideological boot. This is the atmosphere in which I began my engagement with Perrone’s work, and the idea of play, specifically with language, resonated with me as Perrone, in a conversation about his work, told me of his belief that “word-play and world-say can come together in the same package.” And such “word-play,” as a theme interior to Perron’s work and exterior, in the sense of both the political landscape in which we now find ourselves lost, and in Perrone’s “world-say,” (a speaking to, and of, the world), underscores the material consequences of language in play. Two poems in particular from the chapbook speak to such consequences, one from the space of nationality, “Scene from a Dream — for José Antonio Vargas, advocate” (Vargas, an immigration rights activist who came out in 2011 as an undocumented immigrant sent to the U.S. without authorization when he was 12 to live with his grandparents):

An acquaintance approached to ask
whether he ought reveal this query:

If your next of kin is Mexican or Filipino
or some other common undocumented
immigrant nationality in
“the greatest country in the world”
Then should you ignore the request
To come identify the body?

and the other, “fatal permutation:,” from the intersection of guns and religion:

Rather than offer any interpretation or specific reading of these poems, I will leave them here, as I was left, with the weight of their word-play.

Francesco Levato is a poet, a literary translator, and a new media artist. Recent books include Endless, Beautiful, Exact; Elegy for Dead Languages; War Rug, a book length documentary poem; Creaturing (as translator); and the chapbooks A Continuum of Force and jettison/collapse. He has collaborated and performed with various composers, including Philip Glass, and his cinépoetry has been exhibited in galleries and featured at film festivals in Berlin, Chicago, New York, and elsewhere. He founded the Chicago School of Poetics, holds an MFA in Poetry, and is a PhD candidate in English Studies.
Posted by EILEEN at 11:28 PM