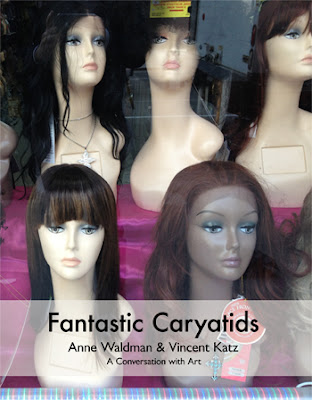 Fantastic Caryatids has two sections: a jointly-written poem by, and a conversation between, Anne Waldman and Vincent Katz. After my first read, the conversation was the one I chose first to re-read and so I begin my engagement there—to wit, the conversation is brilliant, elucidating and charismatic. I receive the impression it occurred as both poets strolled through several art galleries and the streets of New York.

As befits poets, the language is fresh but also effective, which is always a delight to see when it comes to describing/meditating on art. For example, here’s Katz, as quoted by Waldman, on Philip Pearlstein:

AW: Live at the Philip Pearlstein show in Chelsea, on 25th Street…. These paintings by Philip are quite interesting. As Vincent, my companion on this little jaunt, has noted, the figures seem somewhat drained and as if they’re maybe overexposed under fluorescent light, as though they’re in some kind of sauna.

Here’s Waldman on Emilie Clark below; I’m a fan of Clark’s and to the extent my knowledge of her work allows me to “judge” Waldman’s take, I can share that Waldman is spot on. This excerpt also presents briefer, but apt, observations about and gleanings from other artists’ works:
[Click on all images to enlarge] 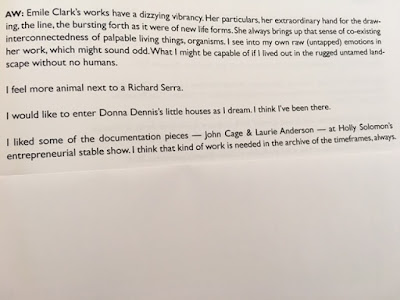 Here’s another excerpt that shows the sharpness of both observers’ eyes, as well as the intriguing significances that surface for both: 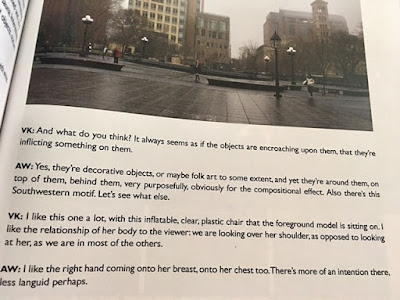 Part of the conversation’s effectiveness is the wonderful presentation of photographs (mostly?) from their walk. Here is a page from which you also might glean more marvels from their talk, in this case one of the poems Katz read as a six-year-old and that opened him up to the joys of reading: 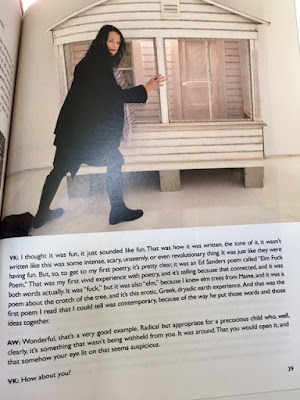 Inevitably perhaps, the conversation encompasses their histories with poetry and the poetry world, but they do so joyfully to the reader’s benefit, e.g. 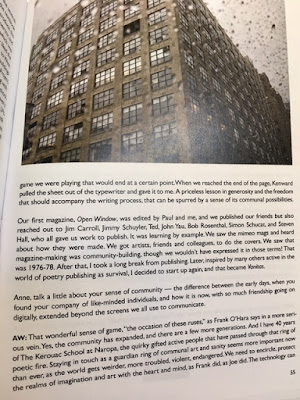 Simply, Waldman’s and Katz’s conversation is a delight—to overhear it by reading it is to receive a gift by these two art-loving poets. Had I been wandering/wondering around in their company, I wouldn’t even care to talk—I’d just listen.

The title poem “Fantastic Caryatids” is free-wheeling and, one (falls to temptation and lamely) observes, just like a conversation. Ironically perhaps, reading the book made me wonder what it would have been like if the poem had been in a different (tighter than freewheeling) form. But I’ll dismiss that thought as one shouldn’t critique a work based on what it’s not but what it is. And it’s a poem whose wit begins at the beginning with its title. A caryatid—from the Greek karyatides—is a sculpted female figure serving as an architectural support (replacing a pillar or column). Here’s an image from the Caryatid porch of the Erechtheum on the Acropolis (Athens): 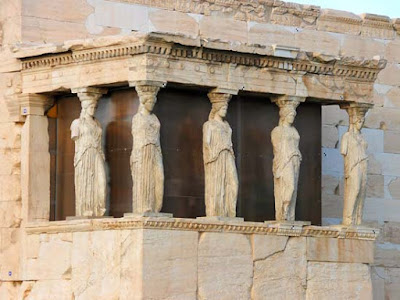 What’s “fantastic” about Katz’s and Waldman’s take is this image instead, as presented on the book cover--what a contrast (I, for one, find it quite amusing): 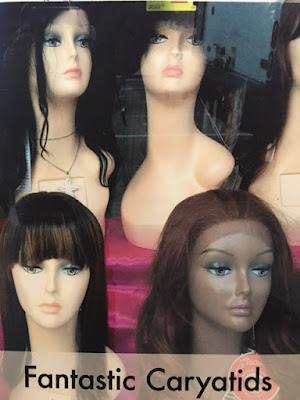 After considering the caryatids, I came to view the poem, its text, as a supporting “column” for something. My take is that the column is seeing—so what does the seeing support? Thus, many lines move from seeing/what is seen to what conclusion or wisdom the sighting effects. For examples:

Thought of the act of seeing with one’s own eyes
Thought of Brakhage trance, how it is an affect of desire
(P. 11)

Over the bridge, jagged lights, spatters,
Even skyline blurred, but heavy
And there go the lights

Always feeling that life’s going on down there
Got to go after it
(P. 14)

the night Suzanne Farrell took a spill
but she was so extraordinary so poised now you see it now you don’t
and did it really happen is that what we saw
oh! and is she hurt, who comes to pick her up but her own resilience
(P.16)

we walked and saw persistence of vision
(P. 24)

And last but not least:

Do people get in the way of looking at art?

What a fantastic line—both literal (“Down at front!” in a theater or “Move your bod, bud” at the tall person in front of a crown in front of a painting) and philosophical (Hello Old Man Subjectivity!).

The pleasure from the poetry is different (of course) from that of the conversation—but it is also pleasure.

The book design by Heloisa Zero and BlazeVOX’s book production enhance the book’s contents. Its 8 x 10 scale allows the interior images to show their merits brightly. Katz’s photographs add a wonderful dimension to the project. Along with the conversation and poem, the book is RECOMMENDED because it’s a delightful treat with quite delicious depths!