EXCEPT YOU ENTHRALL ME by MARK ANTHONY CAYANAN 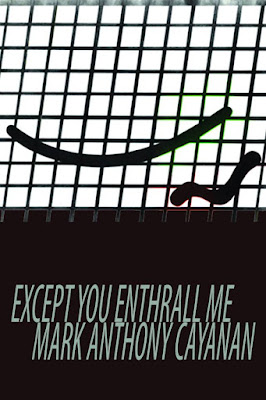 Except You Enthrall Me by Mark Anthony Cayanan
(University of the Philippines Press, 2013)

AMPLIFICATIONS OF A DEMOLISHED DESIRE

In his third collection of poems published by the UP Press four years ago, Mark Anthony Cayanan demolishes his desire—a  constellation of many desires ranging from ones left unnoticed to ones insistently crawling along clavicles—and amplified its innards through unapologetic expositions and intricate narrations. "Let the white petals not stick to the stucco of the house; see them involved with the heat."

Cayanan spreads his gangrenous arms and allows the readers to inspect every wound and carcass with its promising insight ready to pounce on negligent eyes.

Bristles of air are scooped by the hands of the persona in "Give Me A Reason to Abandon Everything" who arrows a prayer "into the air and make[s] wager with whoever receives it" so that there will be sufficient space for inhalations, so that poetry will not sound and appear as burdensome as its diverse modes of sentimentality.

Notwithstanding this intentional mischief in the ejaculation of desires, the poet establishes a rule prevailing in the creative act. And that is, amplification under prudence. In a poem that sounds like a Renaissance man's verbiage on a sculpted torso, the use of anaphoras and anadiplosis substantively contributes to the desire for equilibrium. A balance in intensity is achieved through carefully thought-out schemes in making each line insightful and remarkable.

"Claim a carcass; profess the need." The poet is talking to you, like how a classmate stutters all his sexual escapades (which are actually nonexistent, speculative stories) while sipping a cupful of cold coffee. You listen, and you enjoy the role of an immobile participant. You yearn for saying something but he has already said it, and his is a beautifully crafted utterance; snickers are slips in perfect pitch and slobbers are gossamers of dribbling waste. Even in the reader's silence and submission, Cayanan's poetry creates a meaningful dialogue. His recurrent use of colons in versification denotes his successful endeavor of enumerating all the possibilities of a circumstance. In some instances, you do not know how these proliferations end.

"Mission Statement" challenges the reader's schematic limits for its attempts on demonstrating how a singular line can speak of numerous implications, differentiated from the paragraph form leading to a pre-established sounding. The fusion of the subject of the first sentence and the predicate of the following sentences, together with the omission of linking signals and punctuations, shows how language as a given can be reworked by a poet attuned to the freedom of words and to his role of making this freedom a flight worth applauding.

Poems like these should reach the young adult crowd. With this kind of sincerity, an individual in search of identity and relevance deserves a volume of moans, gasps, and giggles in the form of words, words that by turns haunt and liberate.

Aloysiusi Lionel Polintan is a Senior High School Coordinator of Divina Pastora College in Gapan City, Nueva Ecija. He loves reading and writing poetry, and everything that ranges from Bob Dylan to Hozier, and from Mahalia Jackson to Christina Aguilera. He is doing research on intangible cultural heritage of Southern Novo Ecijanos. He maintains a blog:  /react-text http://renaissanceofanotebook.blogspot.com