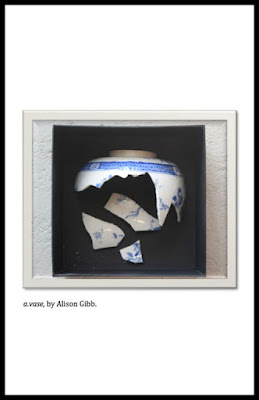 The above is my interpretation of the first seven drawings of a vase’s (a.vase) fragments.

I interpreted. I translated. Did I achieve what Alison Gibb quoted from The Task of the Translator” by Walter Benjamin? Here’s the quote that serves as the book’s epigraph:

Much of the book are drawings of fragments from a broken vase. I liked “captioning” the first seven fragments (and could have continued this enjoyable exercise) because I think of a vase as a container—but for the same vase a variety of things can be contained: water, flowers, pebbles, grain, branches, eggs, oranges, fur, and so on. So why can’t a shard be any of what I cited above for these drawings?

But what if I reversed the order of my original "captions"? Would they still apply?  For example, here’s the first image below—can it be interpreted as both “island” and “white ice”? 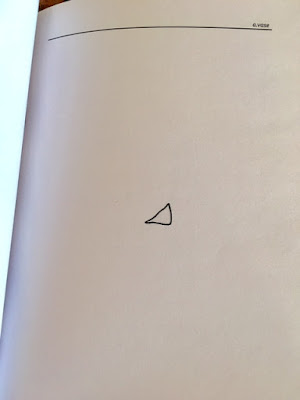 Perhaps my reaction fails as translation unless I adjust it to be “Antarctic” island… and or but if it fails one can still admire the evocativeness of the image that had moved me to respond with an articulation that makes the (abstract) image personal (figurative) to me as viewer. That’s what good poetry and art effects.

Gibb also presents a poem before the drawings. Its persona smashed a vase—how apt that the text textually makes the smashing visible, as in this excerpt:

They are. Blue. Exploded into s m i t h e

It’s not simply the implosion within, then line-break cutting the word “smithereens.” It’s also how the complete sentence is broken: “They are blue.” becomes “They are. Blue.”

Gibb presents an intelligent meditation. For me, the meditation led to what a vase can contain even when broken—that even the broken still contains. Metaphorically, it’s an always relevant lesson.