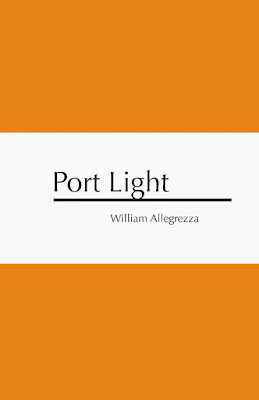 Hay(na)ku is a literary form invented by poet Eileen Tabios, who first experimented with sets of six-word poems: one in the first line, two in the second line, and three in the third line (syllables are not restricted). Hay Naku is also the perfect slang expression for a poet. A sort of OMG in actual language, it can carry both the wow of appreciative wonder and the dismayed ugh of disgust. In Port Light, William Allegrezza uses the form to explore and expand the concept, which lurks in personal moments, social conditions, and the dismaying prospects before our species.

Allegrezza’s opening poem, “Lessons,” includes a heartbreaking record of the sudden panic that emerges when we suddenly see the cheap fragility of our made world and the vulnerability of our children within it:

know
that some
things once ruptured

are broken beyond
repair.

The honesty in these pointilistic verses is unremitting, reminding the reader at once that “inner / darkness” is always handy, just before our closed eyes.

Allegrezza ventures from the personal to the political in poems such as “atomic,” “politics,” and “Through Having Been,” and ventures into the industrial in poems such as “edge” and “ city.” Even as these poems retain their structural limits, their categories refuse to retain their boundaries.  The poem “our time” goes further. It is a meditation on both the industrial and the cosmological, in which Allegrezza observes that

is
no causation)
else is closer

to
breath than
the head altered

subsistence
in this
our urban space.

These set the scene for the masterpiece of hay(na)ku that is the poem “foundling.” Here, the overall structure remains intact, but grammar and meaning fracture exactly as the psyche does when events turn the screws on our expectations. Punctuation is used effectively as direction in several poems here, including “the dance.”

Even structure is stretched when Allegrezza partners with Eileen Tabios on “Response poems.” Here, in a form known as “hayburn,” Tabios writes prose poetry in response to each stanza of Allegrezza’s poem, creating a call-and-response between voices that highlight and offset one another.

In an effective arrangement that gathers the individual poems into a whole, Allegrezza’s explorations build upon each other if to gather them up into a self that can explore further and more fully. With increased frankness and vulnerability, the final poems in this collection suggest the primacy of the personal relationship between the individual and the world. My favorite poem in this collection is  “between us,” a confession that pierces the heart:

i
have borrowed
a self that

I
set upon
the table, and

it
speaks in
clear ways that

Still, it may be that he rightfully saved the most important for last. Allegrezza closes with an urging, in “envoy,” that we “unwrap” and “scatter” his words, or perhaps our words, as tools for the survival and wellbeing of all.

Sheri Reda is a professional writer, librarian, and life-cycle celebrant—and a frequent storyteller in Chicago’s live-lit community. She is also the author of the recently published locofo chapbook entitled Stubborn, which can be found and purchased at http://www.moriapoetry.com/locofo.html