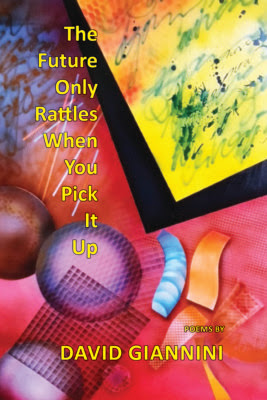 The Future Only Rattles When You Pick It Up by David Giannini
(Dos Madres Press, Loveland, OH, 2018)

I come relatively late to David Giannini’s poetry, but I’m glad I arrived to it. His forthcoming The Future Only Rattles When You Pick It Up affirms how he’s one of my favorite discoveries from attempted wide reading in contemporary poetry. This collection contains a wide variety of forms and concerns, but its opening poem … Well now, THAT, is what an opening poem should be with its special role of inviting (or not) the new book reader. Let me share it in its entirety (click on all images to enlarge):

Who would condemn
small children?  What
if, with Sisyphus,
toddlers were forced to roll

small stones beside him
on the long push uphill
before the terrible trek
back, all of them compelled

to repeat their acts forever?
Perhaps loneliness
would lessen for a while
and love increase; but could

any of us in this century
bear to look even at pebbles
without sensing those kids
forced to stone? Sisyphus kept

and keeps on. . . the children
grow jagged, sometimes
round. We look at their faces
in the rock of mountains,

and at times they are visible
inside geodes—tips of
noses sticking out, shiny,
purple from exposure.


Another type of stone rears up in “THAT COUNTRY,” which unfortunately and sadly is a poem for these times:

They were warnable, the people of that country,
and not warned.
Their flesh
burns in the newscasts
coloring in the fact
of assault.
High in the trees
every nest’s empty. There’s silence across wheat
of the full fields the elders
and the children
hacked.
How it is that

wind rushes ahead of its own core, which is still

air; that there are human bodies fleeing

until they halt
and wait for the characters inside them

to catch up, the static ones
who would crackle and hiss
against betrayals;
that they will

move beyond trees
over the rough roads
into the cities

where the eyes of their countrymen turn


Beside offering news as can be found in poems, the collection presents poems that attest to the poet’s keen eye as regards the human condition. There are poems that seem timeless—like this erasure poem:


PETRARCH: SONNET 164
(erasure from a translation by A.Z. Foreman)

Blue heron, even as you tilt

over the reflecting lake

you can never know

as long as your skull. So it is

with a sad, full

Lest you need more persuasion to check out this collection, here’s a personal favorite that speaks, I believe, to the subtlety and depth of his meditations. Plus, it provides much pleasure:

1.
A lipsticked girl on the path—
mouth red
against pale skin,
going with her mother
for a swim.

A blip in the swell-bent
blackberry canes—
only the flick
of its tail in thicket,
male
cardinal

Not to let land-and-lake be decoy
for this essence I want to hold
as shape, size, scale, and process:
red
as that painted dot
found in the Neanderthals’ cave
in Gibraltar, or as Miro’s
The Red Spot,
as event
beyond its occurrence
in the living frames

For reading a poet with a clearly high degree of not just awareness but self-awareness, RECOMMENDED.

Eileen Tabios is the editor of Galatea Resurrects. Her 2017 poetry releases include five books, two booklets and eight poetry chaps. Most recently, she released MANHATTAN: An Archaeology (Paloma Press, U.S.A.), Love in a Time of Belligerence (Editions du Cygne/SWAN World, France), and THE OPPOSITE OF CLAUSTROPHOBIA: Prime's Anti-Autobiography (The Knives Forks Spoons Press, U.K.). Her books have been released in nine countries and cyberspace. Her writing and editing works have received recognition through awards, grants and residencies. Her first 2018 book will be an edited anthology about the CDC Word "Ban" entitled EVIDENCE OF FETUS DIVERSITY (Moria Books/Locofo Chaps). More info about her work at http://eileenrtabios.com