(from Dredging For Atlantis, Otoliths, 2006)

The Poet's Notes On Her Poem 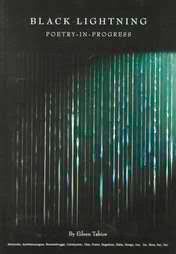 "IN PASSING" was written when I recalled an  interview I'd conducted with Jessica Hagedorn for my book BLACK LIGHTNING: Poetry in Progress (Asian American Writers Workshop, New York, 1998). The interview focused on how she came to write her poem "Picture This" -- a commissioned poem for an exhibition brochure commemorating James Rosenquist's painted series, "Gift Wrapped Dolls." Rosenquist's works portray close-ups of the faces of dolls from the 1950s -- mass-produced dolls with generic features offering blank stares. The artist had wrapped the dolls in plastic, photographed them and, from the photographs, created his paintings. The paintings are also huge, all 60" x by 60" squares. As I wrote in my interview, "The paintings disconcert and perhaps repel; but, ultimately, they seduce the viewer into fascination."

Certainly, when you see even just this photo from the book, I think you can sense the power of Rosenquist's paintings: 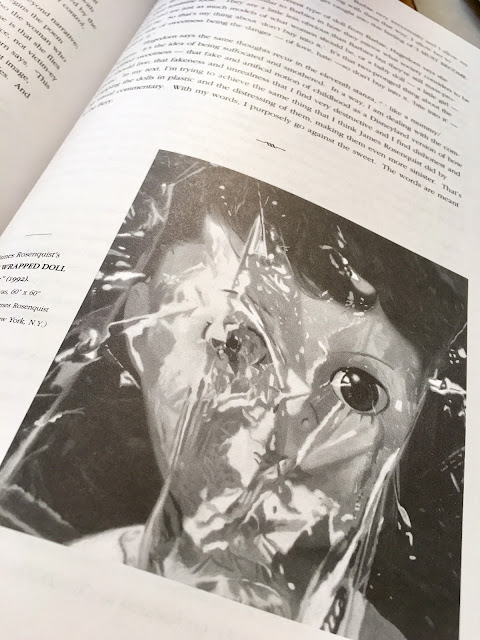 A woman hurled. Hurled out
A woman
Hurls herself out the window

Jessica's poetry is inspirational to me in many ways, but in the case of my poem "IN PASSING," I nod to something she'd once said about poetry or the poem: that it doesn't sit on its ass fanning itself. That is, the poem has to be more energetic. For "IN PASSING," I nod to the power of imagery, specifically its ominosity. I'd grown up considering dolls a positive thing -- an object of joy, of gifts. The idea that a doll can disconcert and possibly repel -- as can be the case with the dolls Rosenquist painted -- has stayed with me for years. Perhaps its implications just align themselves with long-held speculations about the cost of Beauty.

Eileen R. Tabios is the editor of Galatea Resurrects. Her 2017 poetry releases include five books, two booklets and eight poetry chaps. Most recently, she released MANHATTAN: An Archaeology (Paloma Press, U.S.A.), Love in a Time of Belligerence (Editions du Cygne/SWAN World, France), and THE OPPOSITE OF CLAUSTROPHOBIA: Prime's Anti-Autobiography (The Knives Forks Spoons Press, U.K.). Her books have been released in nine countries and cyberspace. Her writing and editing works have received recognition through awards, grants and residencies. Her first 2018 book will be an edited anthology about the CDC Word "Ban" entitled EVIDENCE OF FETUS DIVERSITY (Moria Books/Locofo Chaps). More info about her work at http://eileenrtabios.com