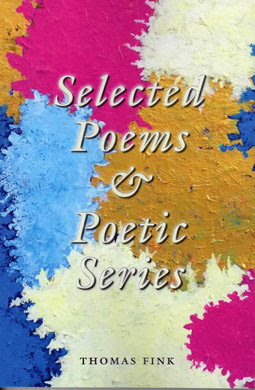 Convention and Desire: Decoding the Jigsaw Hubbubs, 1 through 23

Selected Poems & Poetic Series proves words defy gravity in the hands of Thomas Fink. In the Jigsaw Hubbub series 1 through 23, he offers insights into modern-day machinations, targeting areas of familiarity in unfamiliar ways and alluding to a society and culture bereft of emotional consequences. Particularly notable is the manner in which the poet chooses to expose aspects of living in a disengaged, fragmented society which somehow is held together by tradition and vestiges of hope.
In the Jigsaw Hubbubs, each of the 23 poems takes shape as a helix swirling beyond the familiar into spaces unknown. While holding to poetics of past and present, we peer into spaces we only thought we knew. We observe movement inside cubicles and detect interactions which offer points of reference but no easy access to meaning. Entrapment comes to mind, yet nothing seems permanent.
The language used in Jigsaw Hubbubs 1 through 23 creates a puzzle or kaleidoscope of thoughts and experiences that offer new perspectives based on images of life being lived without emotional commitment, populated by inhabitants extracting substance from intangible moments for the sake of achieving oneness with the rest of the world. Interactions between words and phrases in the Hubbubs invoke interpretations that defy logic, deny calibration and repel conciliation. Yet, beyond a world of untoward situations and circumstances where time zones seem to collide, there is a sense of tenacity. Despite threatening to disengage past from present in their impact, words take refuge in reflections of history and traces of humanity so inhabitants remain grounded in cultural context and human experience.
Decoding the Jigsaw Hubbubs is a process. At first, words seem resistant, offering no frame of reference, only allusions, juxtapositions and discordant images. Slowly, meaning is offered up. Cacophonies settle into synchrony, colloquialisms emerge, and the poems begin to unveil undisputed truths concealed within a fragmented universe in which the familiar is deconstructed into remnants from which new concepts and fresh poetics are formed. The following descriptions highlight observations which at first resist conceptualization but somehow find a mood of acceptance:

Poetic form and juxtaposed images, familiar and absurd, create new realities that require suspension of disbelief and gradual acceptance of the unimaginable.
Yet, with the Jigsaw Hubbub series, we are not left to decipher meaning on our own. Gravity based on shared knowledge takes command as memories are beckoned to bridge gaps between what we know and what we must come to accept. The poems are hinged on cultural sanctity, notions of familiarity, and traces of hope:

Without warning, the poet plumbs our psyches for shared memories and cultural experiences that ground and connect us, even inspire us, despite challenges of living in a fast-paced, fragmented society.
The Hubbub series is not for the fainthearted nor meant for shrugging off, more akin to a galaxy of ruminations presented in twists and turns with threats of blowing apart. The Hubbub poems rely on the familiar to explore the unknown, dispersing glimmers of humor and traces of hope along the way. Notions of apathy and fragmentation are invoked but balance is achieved in satirical rifts that reveal positive moments in serendipitous ways:

The Hubbub poems are reflective, satiric, playful, demeaning, bemoaning, hopeful and they reveal vestiges of life amid the sway of opportunistic chatter which dissipates once uttered, leaving only traces of attitude or what might be mistaken as such. The poems remind us that we can't take it with us and in fact, why try? It's the way life is lived in "minimum security rabbit hutches" (7). We get glimpses into cubicles where the dress code requirement is "sunglasses and a laptop (14) and "the epiphany is that one is supposed to supply content" (14). No solutions or saviors in this reality: "Plaid neighborhood     I don't     have pants" (4). So be content with what's available: "No eros without the unsure"(11). Yet, in reality, Eros has left the building.
This series of Hubbub poems cleverly crafted by Thomas Fink can be stark and unsettling, but there is refuge in conventions of the familiar and there is hope in traces of humor and aspects of desire. Jigsaw Hubbubs 16 and 22 seem to depict the language and general mood of the Jigsaw Hubbubs:

She feels like a
permanent extra, as
though lodged, an
afterthought, in a rusty
Clapboard af  fair squatting
in gray tulips, where sunshine
doesn't shine, & the
cat is bigger than the child...(16)

Reading Thomas Fink's Selected Poems and Poetic Series, specifically Jigsaw Hubbubs 1 through 23, is an exploration, a delightful experience of witnessing a new universe unfold.  After some decoding, we gain access and are catapulted into spaces in which concepts and images appear to defy the pull of gravity. Trepidation looms, yet we never leave the ground.
Holding to what we know, we scramble through a jigsaw of experiences that appear fragmented, disconnected and bereft of meaning. At the outset, common knowledge only leads to misconceptions and questions. Threats of a harsh reality predominate. Finally, with little to go on except traces of culture and humanity, we begin to accept the unnatural formation of stark realities. Unfamiliar concepts and images begin to merge with pieces of reality that we know and recognize, and access to this destabilizing, unfamiliar world of people, places and concepts is granted. Discordant images become reflections of truth, and this new world makes all the sense in the world.
Reading Thomas Fink's Selected Poems and Poetic Series, Hubbubs 1 through 23, we are guided by a sense of familiarity based on conventions, what we already know and accept. We witness detachment as well as notions of hope reflected in experiences of people we may or may not recognize but who share common bonds of cultural experience and humanity. After traces of history and culture are unveiled, a desire to know more incites imagination, and new concepts and relationships are ascertained. To navigate this world created in the Jigsaw Hubbub series, we rely on the balance between what we know and what we hope to find out. The usual controls are clearly not in working order and the power button is found outside a conventional body of knowledge. Known concepts threaten to disengage; yet we remain grounded. An “invisible trap door” stays unlocked throughout the entire experience and anyone can escape at any time. But why would we?

Margaret H. Johnson's desire to explore interests in poetry, photography and curriculum design led to an early retirement from her position as Lecturer of English at the City University of New York. Her publications include scholarly articles, selected poems, and poetry reviews. Nonfiction works on writing for self-mastery are in progress. Her book of poems is scheduled for publication in the fall, 2017 and she plans to publish a children's book also in 2017.  She coordinates a poetry/performance collaborative which promotes poets and poetry in her local community and she develops workshops for writing and emotional mastery. Beyond interests in writing and poetry, she is a freelance photographer and sustainable living advocate.