A SIMPLE WORD by MARC GABA

ONE WAY TO CHOOSE A BOOK’S FRONT COVER IMAGE

To be human is to live amidst belligerence. It’s a context that love won’t eliminate (permanently), even as love refutes it (temporarily). Thus, when I had a manuscript accepted for publication entitled Love in a Time of Belligerence, I thought of poet-painter Marc Gaba’s painting “A Simple Word.” It’s oil on two canvasses, 12 x 9 x ¾ (2017): 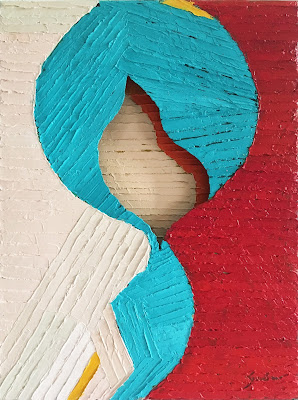 I relate this painting to belligerence because of the hole of the top canvas, through which you can see what’s on the second canvas underneath. Through the hole you see on the bottom canvas the same red and similar white-cream color that exists on the top canvas. I view-read that to mean that the rupture—such as the psychic and/or physical damage resulting from belligerent forces—does not necessarily  succeed in destroying what it ruptures.

Indeed, because the two colors viewed through the hole are the same or similar, there’s an implication that the turquoise blue and mustard yellow might also exist on the bottom canvas, even though they’re not discernible through the hole. Whether or not the blue and yellow actually exist is not significant since one can’t see the entirety of the bottom canvas through the hole; what is significant is that there’s the implication—there exists the possibility if not probability—that they may exist as much as the red and white-cream colors.

While my reflections caused me to use, with the artist’s permission, the image for the front cover of my forthcoming book from Éditions du Cygne/SWAN World (Paris, France), the belligerence issue obviously is not the only matter relevant to Gaba’s series of two canvases with the front canvas bearing a hole through which the back canvas can be seen. For example, this is part of the material for Gaba’s ongoing exhibition at Fundacion Sanso (Manila) that features, among others, his dual canvas works: 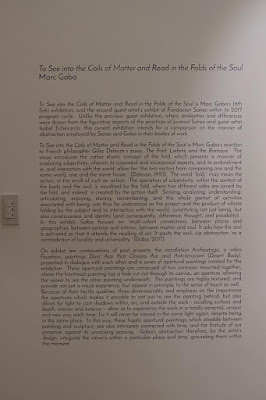 As regards the exhibit he entitles “TO SEE INTO THE COILS OF MATTER AND READ IN THE FOLDS OF THE SOUL”, Gaba also posted on Facebook some notes: 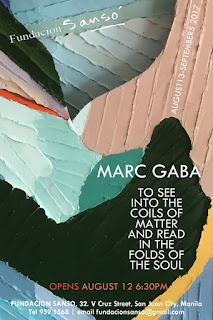 "To Deleuze, the Baroque is the operation of creating folds. Matter and the soul are infinite folds, and crucially, the two are connected.

"Contrasting the Baroque against the Platonic conception of the physical and the metaphysical as mutually exclusive, Deleuze proposes instead the 'Baroque innovation:

"He continues: '[T]he infinite division of matter means that the compressive forces relate each portion of matter to its surroundings, to the surrounding parts which bathe and penetrate the body in question...'

"In context and in brief, your body, caught in the matrix of matter, is your soul, and you cannot respond to this troubled world without one."

More of the artist’s thoughts are available on his Tumblr page where he presents a “Credo as Artist Statement.”  You can see his entire statement through the link, but I find it synchronistic that he opens with the statement

Surely that is apropos of belligerence…

I also appreciate how Gaba’s statements indicate the depth of his root source for his dual canvases. That such thoughts are distilled into this particular painting’s non-(dramatically) baroque (or non-baroque in my eyes) image only shows the effectiveness of distillation—in the same way that, in poetry, no word is ever “simple."

In looking again at “A Simple Word,” one also sees how Gaba’s color diction for this painting result in a non-gloomy image. The colors are bright, even refreshing—and I quite revel in the blue that he chose: a lovely turquoise. Its overall effect, for me, is uplifting … on second thought, I wouldn’t say uplifting but encouraging. The painting presents rupture but because—as others have said before me—“Color is a narrative,” one easily discerns that the painting is not suggesting bowing down to rupture and its effects. Relatedly, in Love in a Time of Belligerence, there are phrases (in several poems) that speak to not being taken over by the moments of adversities—belligerence—cited throughout the book, for instance from “Witnessed in the Convex Mirror: Don’t Make Up the Ocean,”

In our nakedness, let us share ancestry, not look at each other as an Other. We all deserve to breathe and we cannot but share the same life-giving breath

Or, from “PilipinZ, the lines


Synchronistically specific to the lovely turquoise in “A Simple Word” are these lines from “Letter from Sarayaku” that come after describing an incident where Sarayaku residents successfully drove out Ecuadorian soldiers from their land:

I wrote “blue bird wings” and am happy to match that blue to that turquoise depicted in Gaba’s “A Simple Word.”

Ultimately, when I look at Gaba’s painting, I think of that Sarayaku elder’s words. Despite belligerence, do what one must do to survive (the red exists on both canvases), and hopefully not just to survive but find ways to live joyfully (that lovely turquoise that dominates the image, an achievement when the red to its right is a more typical color for garnering a viewer’s attention). And do so with calm: “It’s just to continue living.” I’m honored and grateful Marc Gaba's painting covers the poems in Love in a Time of Belligerence (forthcoming Fall 2017). 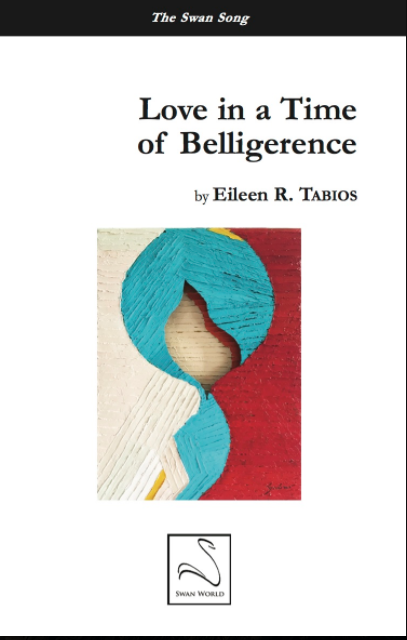 
Eileen Tabios is the editor of Galatea Resurrects. Her 2017 poetry releases to date include two books, two booklets and six poetry chaps. Forthcoming this fall are two new poetry collections, MANHATTAN: An Archaeology (Paloma Press) and Love in a Time of Belligerence (Editions du Cygne/SWAN World). Her books have been released in nine countries and cyberspace. Her many projects also include an ekphrasis project at The FilAm Artist Directory for which she's always looking for submissions. More info about her work at http://eileenrtabios.com