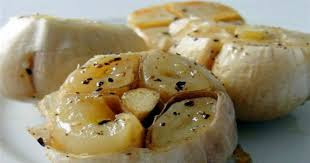 Recently, I had the pleasure of judging the hay(na)ku poetry contest sponsored by Canada's  Festival de l'Ail de Ste-Anne Garlic Festival. I thank Elizabeth Johnston, coordinator and creator of the garlic poetry contests, for the invitation to judge the contest which took place cheerfully on Facebook.

The top winner, like other weekly poetry contest winners, will be displayed at the Festival on Aug. 26. From these "semi-finalists," a top winner is chosen by Festival goers -- a People's Choice type of award!

For the hay(na)ku, I congratulate Sheila Murphy for her winning tercet that will represent this stairstep form:

I chose Sheila's poem for its clever layers involving synesthetic volta with a culinary metaphor. A monsoon is unlikely to reach the desert that is much of Arizona. But a rainstorm, and (as suggested) one that's a side-effect of a far-away monsoon, might touch this U.S. state -- it just “flavors” Arizona. In such case, that rainstorm might be as welcome as a mojo de Ajo -- or garlic gravy -- that improves (if not rescues) a dry side of beef. Of course, the steak need not be desert-like and mojo de Ajo still can elevate a perfectly-turned out dish, whether it's steak, chicken, shrimp, pasta or popcorn. Here are RECIPES! 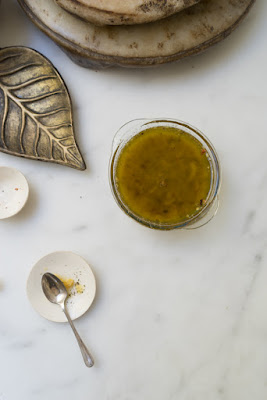 Sheila's poem also offers a synesthesia involving sight instead of taste. Look at the above photo of mojo de ajo from 101cookbooks and one can see in that glass bowl what a rain-splashed desert ground might look like!

Lastly, Sheila's poem offers clever syntax as the "M/m"s and "A"s that begin the two thoughts -- "Monsoon / flavored Arizona" and "mojo de Ajo" -- offer both a consonance and visual rhyme as well as, given the switch from English to Spanish, a sense of translation.

This hay(na)ku shows the grace and intelligence of Sheila Murphy's poetry. Congratulations, Sheila!

As the hay(na)ku winner, Sheila also will receive a copy of BLINDFOLD by John Mikhail Asfour (McGill-Queen's University Press, 2011), donated by the Quebec Writers Federation and the Montreal Review of Books.

As with Sheila Murphy's hay(na)ku, the following three finalists all share a deft poetic "turn." We have Jonel Abellanosa with

Two
Garlic cloves –
You and me

Never has garlic been so lyrical as in this hay(na)ku. I love the hearkening of complicated personalities evoked by garlic which is that unexpected member of the lily family that does not receive consistent responses (one might hate as much as love garlic). And I adore its Hollywood ending of one finding/receiving recognition in a like-minded Other so that, together, they form a couple. 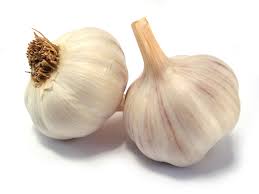 Another finalist is Elly Nobs with

I don't traffic much in the culinary arts so I had to resort to Google for the word "rocambole" -- in such exercise, I realized the brilliance of Elly's hay(na)ku. Rocambole is the most common type of garlic--I didn't know that; I just called garlic ... "garlic"! 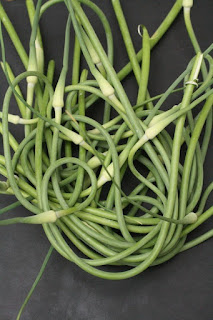 But why the reference to "problematic"? The answer lies in the third line's reference to scapes, flower stalks on hardneck garlic. Farmers harvest the scapes when they’re young so "they won’t drain nutrients from the garlic bulbs that will be dug up in a couple of months, plump and glorious and ready for drying.” Yet “problematic” is the poem’s turn or swerve for scales are also a pleasing “vegetable, aromatic, and even herb all in one.” Thus, the poem advises, "eat their scapes"! Click HERE for garlic scape recipes; another article HERE showcases what one can do with scales. Well-done by new hay(na)ku poet, Elly Nobbs!

Our third finalist is Princess Fernandez with

An "aswang" is a shape-shifting monster in Filipino folklore. Princess Fernandez’s hay(na)ku reminds that (per WIKI), “like vampires, aswangs are repelled or killed by using garlic, salt and religious artifacts/weapons (e.g. Holy water, crucifix, rosary, prayers and religious verses).” More information is also available at The Aswang Project which offers images of the aswang; the next time YOU hold a garlic bulb in your hand, you might (ahem) sense an aswang image among its papery folds ...

There's an actual list online of "8 Ways to Defeat an Aswang" by Yvette Tan.

A nice swerve into a different type of pungency, Princess Fernandez!

Finally, we have four Honorable Mentions. The first three all display fine humor -- they all made me laugh! First, the dry wit of Kate McGregor with

Everything
tastes better
with garlic. Almost.

Next, we have the slyness of Robert Cerda with

Garlicked
Rice returns
With a vengeance.


Finally, we have Stephen Kent Roney whose humor delivers a visceral punch -- at least to readers (like me) who have been accosted too many times by the scents in elevators. Stephen presents fine observation skills with

I end with one more Honorable Mention: Audrey Ward with

Aroma
Reaches me
And I hunger

It seems fitting that I end with Audrey's hay(na)ku as it presents the on-point effect of garlic upon those with discriminating taste: hunger.

It was a pleasure for me to participate in the Festival de l'Ail de Ste-Anne Garlic Festival Garlic Hay(na)ku contest. I am heartened to see that the form continues to travel far and wide! Let me, as the form's inventor, also confirm for the record: Yes,

Yes,
hay(na)ku is
a garlic fan

More information about the hay(na)ku is available HERE.

Eileen Tabios is the editor of Galatea Resurrects. Her 2017 poetry releases include two books, two booklets and six poetry chaps. The latter includes a new fundraising chap, MARAWI, co-authored with Albert Alejo. Forthcoming later this fall is a new poetry collection, MANHATTAN: An Archaeology (Paloma Press). She does not let her books be reviewed by Galatea Resurrects because she's its editor, but she is pleased to point you elsewhere for a recent review of her work: M. Earl Smith reviews Excavating the Filipino In Me for The FilAm Magazine!  More info about her work at http://eileenrtabios.com