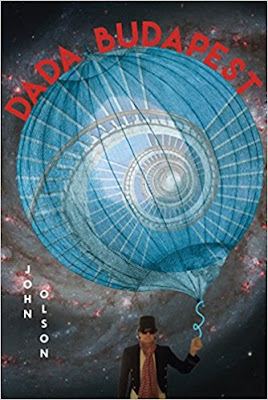 Fine, it didn’t get me at the first sentence. But it got me with the second—and that’s saying something about this 401-page book. Here’s the sentence that yanked me into reading John Olson’s DADA BUDAPEST in one sitting and as soon as I opened it:

It crashed into an abandoned pile of socialism.

Candidly, that made me snort out a laugh that I had to stifle lest I offended the strangers seated around me in a local cafe. I had just picked up the book from the post office, brought it with me to a coffeeshop, opened it as soon as I got my white chocolate mocha, and flipped it open intending to scan the first few pages. Instead, I not only read it all but began taking notes for a review. As I didn’t have any paper with me, I had to make the notes on the same envelope in which the book had been mailed—such was the urgency of my reaction. Here’s a photo of the notated packaging, along with the spy novel I’d brought to read but ignored for Olson’s poems: 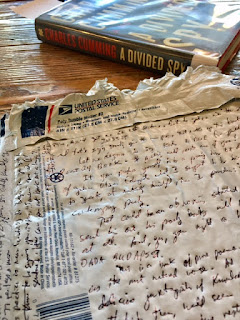 DADA BUDAPEST is a collection of prose poems that contains tight musicality through its most unslack sentences—not a single sentence sags! The music also threads together the most delicious juxtapositions of bits of knowledge that, before the poet turned his attention to them, might seem to have no or little relationship to each other. It’s not enough to lapse to the interrelationship of all things—those elements still have to cohere to create a poem. In Olson’s hands, the wide range of objects-as-references he gathers might be read to contain a logic resulting from jazz, an art of (among other things) improvisation. Until it’s not. Let’s take a look at the opening poem whose second sentence so jazzed me up:
(click on all images to enlarge) 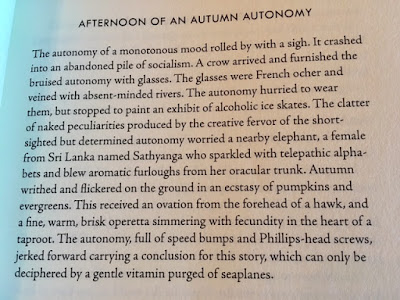 Disparate elements, sure—from socialism to the Sri Lankan elephant to Phillips-head screws to seaplanes. But when I took a closer look at the prose poem, I got a sense of each sentence being worked upon and over to ensure each word was just right. After all, the approach is “dada” so that references might be substituted in a seemingly arbitrary way as narrative logic is not at play. Yet the result—given that this is poetry—must still sing or be otherwise poetically effective. So, as an example, there’s this sentence

The glasses were French ocher and veined with absent-minded rivers.

That sentence works—it's positively accessible through, yes, meaning. (Music vs. meaning is a false binary in poetry, yes?) Start with an image of ochre in Roussillon, Provence— 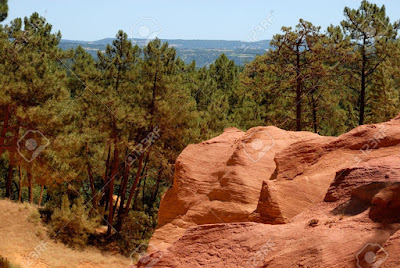 Observe the “veins” of horizontal lines. Such might evoke rivers. But then Olson heightens the poetry (evocativeness) by inserting the adjective “absent-minded” which is also appropriate—does not (the water of) a river go in a direction planned not by the water but by the nature of the land including its hollows? A river doesn’t have to think about where (its waters) go; it just absent-mindedly goes!

Further down the poem is the mischievous logic of “alcoholic ice skates”—a logic that surfaces when one thinks of newbie skaters skittering along an ice skating rink. When one is off-balanced (e.g. a skittering ice skater), as might result from too much alcohol, one has no pretense, hence the next reference to “naked” for purpose of “naked peculiarities.” Next up, I would have thought the surfacing of an elephant would be nonsense but it was preceded by a reference to short-sightedness and, according to no more trustworthy a source than Sea World, “Elephant eyes are about 3.8 cm (1.5 in.) in diameter and their vision is moderate. Elephants traverse forests, savannas, and grasslands, primarily orienting with the trunk, as opposed to sight.” From there, it is no less than a joyous romp to hail the Sri Lankan female elephant named Sathyanga!

One can determine, thus, a logic in a John Olson poem not just because of the cohesive abstraction of music but the specificities of knowledge. (And is this not the great effect of art and poetry as regards nonsense: when nonsense makes sense?) At one point of reading through this book, I pictured Olson to be a white-bearded librarian who never leaves his library and sources poems by choosing random stacks of books to push and then making poems by plucking phrases from where the books randomly opened themselves after falling; he massages the plucked phrases and, Voila!, a new poem! With more thought, this picture of a hermit-librarian can’t be quite true as I vaguely recall from an emailed conversation years ago that Olson is a runner. (Does he still run? Was he running during these poems—is No. 9 current in “And What”? Anyhoo…) But my initial sense of the poet as a librarian more directly reflects how much knowledge the poet contains and crams into each of his poems. Such creates fresh metaphors and similes, as when, in “Waggle Dance,” he likens a “bizarre form of acrobatics” to a “type of Japanese Butoh.”  Fabulous.

At times, the knowledge is delivered transparently and still deftly, as in “A Brief History of Indigo” and, from “Between Hotels,”

Be kind to your legs. Let them finish what they’re doing. Remember: the moon’s distance from the center of the earth is 240,000 miles.

Thank you. Now I know “the moon’s distance from the center of the earth.”

Also, there are certain things that some poets don’t like to talk about in public. One of them is how the poem can be a premonition—how a poem can foretell. I hate to say it but, as someone born in the Philippines and who still follows developments there, there is or was (at the time of its writing) a (political) foretelling in the first paragraph of “The Ghost of An Adjective”—

Anyway, I’ve read many of Olson’s other books and his linguistic inventions (and discipline) are not new to this book. What I sense more in this collection versus the others (though I’m not saying such doesn’t exist in the other books) is an overt focus on the nature of writing, e.g.

Words are the best illusions. Words are everywhere, books in brooks and sermons in stones. They comfort our mortality. They give us the illusion of meaning.
—from “Radical Tapioca”

I’ve never been into sailing. But there is a nautical term that has a great attraction. The word is ziuhitsu, which means “follow the brush.” Writing, which bears many similarities t the practice of sailing, requires a shiver of light. There is no shame in changing direction, particularly when the winds are curious sensations.
—from “Ziuhitsu”

There can be no mistaking it: I write poetry for the delirium. Thought is reflective, quiet, that’s not it, not what a poem is, not entirely. It’s too wild, too eccentric, spinning out of control.
—from “Smart and Black and Full of Birds”

Lines of poetry create a galaxy of goats that deform the fence and withdraw into squares of androgynous headlight. Look what walking has done to the sidewalk.
—from “The Stepladder Confesses Its Clatter”

As well, the opening to “Hippopotamus” (and, thus, "Dada Budapest"): 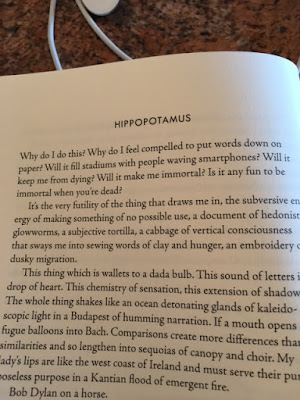 There’s also a wise comment on the effectiveness (or not) of anthologies somewhere in the book (yeah, my fingers slipped and the book shut and pardon me if I don’t go for the specific reference—did I mention the book has 401 pages?).

Nonetheless, this is dada. Are there moments in the book that, for whatever reason, don’t work? In my read, it happened once: the opening lines to “The Glamour of Reproduction” starting with:

In winter the arcade menstruates.

I can’t make that line work for me, no matter how much I try (and should I be trying so hard?). But, for me, this dislocation happened just once. That’s pretty good for a thick book of poems. And the matter at hand is, of course, dada... so that, ultimately, what makes sense is subjective.

I’d be remiss if I didn’t mention the sheer pleasure of Olson's word plays. Somewhere (in this 401-page book so look it up yourself) “pallets” transform to “palace” and it’s a hoot. As is this example from “Eight Pounds of Feeling”:

If you see a seesaw would a seesaw see you?

If you haven’t already noticed, my face is in labor. It’s giving birth to a nose.
—from “The Ears of the Cricket”

It’s odd how quickly adapted I became to wearing reading glasses after turning forty-three or so. I cannot say the same about my prostate.
—from “Going All Gonad”

An eyeball dragging a caboose to the end of a sentence.
—from “Infinity’s Orchid.”

I could go on; you’d want me to go on. But do yourself a favor and get the book for yourself. Have you been paying attention to the titles of the poems I cite? But, meanwhile, here’s one for the “Pimple-Poppers”:

I can reach heaven with my tweezers and a feeling of intense abandon.
—from “The House of Estuary”

(Geeeeeeez: only a John Olson poem can make me reveal publicly that I'm a fan of  YouTUBE’sDr. Sandra Lee.)

It’s also fun when you occasionally see the process surface, as in “Eight Pounds of Feeling” when a reader can sense that, at first, the poet thought the poem wasn’t working as it began to be written. But Olson pulls it out of its potential Alice-ian vortex. Here’s its beginning: 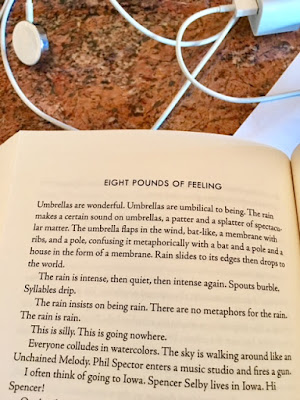 Lucky Spencer Selby to find your way in an Olson poem. Hi Spencer!

Many of the poems last for more than one page, a testament to the poet’s mind—the scale indicates the depth and span of the poet’s ability to suspend the universe for the alternate worlds he creates in his poems. But let me share a one-page poem for the sheer pleasure of it—and it says something about the consistent effectiveness of his poems that I open the book at random for a one-page example: 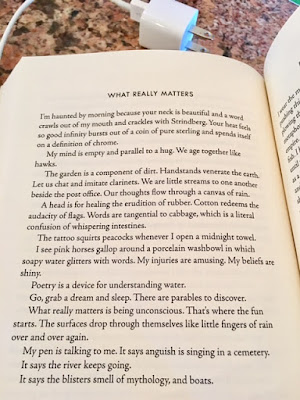 Hear that, Grasshopper? “Go, grab a dream and sleep. There are parables to discover.”

I could go on. For Clayton Eshleman said it perfectly in his blurb:

“John Olson is writing the most outlandish, strange, and inventive prose poetry ever in the history of the prose poem.”

Consequently, my "review" does not do justice to the marvelously rollicking expanse of John Olson’s poems. I’ll just note: HIGHLY RECOMMENDED!

I do want to express gratitude to the publishers for releasing such a thick poetry book—the publishing world needs more of you! Thank you Joseph S. Phillips and Susan J. Wood, publishers of Black Widow Press!


Eileen Tabios is the editor of Galatea Resurrects. Her 2017 poetry releases include two books, two booklets and five poetry chaps. Forthcoming later this fall is a new poetry collection, MANHATTAN: An Archaeology (Paloma Press). She does not let her books be reviewed by Galatea Resurrects because she's its editor, but she is pleased to point you elsewhere for a recent review of her work: Dina Paulson-McEwen reviews AMNESIA: Somebody's Memoir for WALK THE LINE!  More info about her work at http://eileenrtabios.com