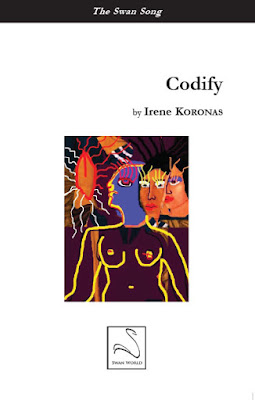 Irene Koronas’ Codify is minimalist, yes, but it’s not hard-edged: it leaks and stains … all to the good as the poems are supple enough to support whatever response—including assessment—a reader may hazard. The poet and/or her poems may be said to be the opposite of, as she puts it in “52,”

the conceptual
thug on paper

Indeed, I find the poems supple enough to support much hilarity—for instance, this very knowing poem:

a posthuman
in the attic

Several of the poems’ dexterity owe much to a rigorous imagism that’s defiantly post-lyric, e.g.

hair strands in guest room
—from “54”

Other poems remain slippery, if not uneasy, e.g.

mother calls
until a few days

As good poetry can, Koronas often refocuses our attention on what’s usually in front of our eyes but ignored, e.g. “why bobble head / on dash” from “82.” It’s a good effect and goal to de-mundane-ize the mundane. It is, after all, a poet’s task to see.

What I can say about these poems’ way to eros is that they compel me to sit up (since I was sitting when I read the book), stiffening my spine. I welcome the reminder for good posture, but the point is that the poems compel a physical response with lines like, from “68,”

bleed his suck rage
sew up their kidnap

The effects of Koronas’ poems are possible because despite its minimalism that requires active investment by a reader, the poet does not stray from her “devotion / to logic” (from “13”), even as the poems show how logic can be subjective.

Codify is not a typical poetry reading experience—and for such, I am grateful. Recommended.

Eileen Tabios is the editor of Galatea Resurrects. Her 2017 poetry releases include two books, two booklets and five poetry chaps. Forthcoming later this fall is a new poetry collection, MANHATTAN: An Archaeology (Paloma Press). She does not let her books be reviewed by Galatea Resurrects because she's its editor, but she is pleased to point you elsewhere for a recent review of her work: Dina Paulson-McEwen reviews AMNESIA: Somebody's Memoir for WALK THE LINE!  More info about her work at http://eileenrtabios.com