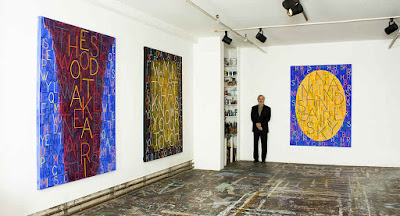 (Darrell Nettles in his studio)

As regards looking at visual art that utilizes letters, some viewers/readers have said that shifting perception from reading a letter to seeing its shape and other visual properties can be challenging. As one of them, I, thus, am positively struck by Darrell Nettles’ painting series, “Broken Verse.” He may break the verse-sources but he retains the letter-hood of the letters, as in this example, “Take Not” (2017), an 82 x 60” acrylic on canvas:
(click on all images to enlarge) 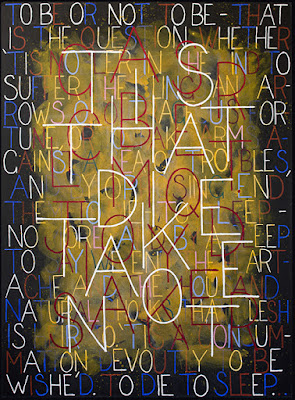 For me, the challenge then becomes one of appreciating the visual imagery without being (immediately) hampered or distracted by a reading. It’s this basis that makes his paintings successful. Yes, the letters are discernible in his acrylics on canvases but the initial pleasure one derives from the images relate to more visual-oriented properties like scale, depth, and color (including combinations thereof). As such, Nettles also has eliminated (or elevated?) the dispute between abstraction and realism/figuralism--what's more realistic than a letter or word that one reads and yet their presentation as colored shapes upon other colored backgrounds is abstract.

(By the way, I have seen some of Nettles’ work in person but am “reviewing” a book and so can’t attest to the nature of these particular paintings’ surfaces. But based on other work, I know that Nettles is meticulously effective in applying paint on canvas.)

That one looks at Nettles’ paintings as paintings despite the presence of letters is particularly impressive because he doesn’t shape-shift the letters (as has been done by other artists). And he is not supposed to—ultimately, one can read from Nettles' paintings!  In “See All”(2016), a 72 x 54" acrylic on canvas, after first admiring the dark blue orb against the unexpected peach-ish background, which is partly to say, admiring the color combination, one can read from top to bottom William Blake’s poem “To See a World…” 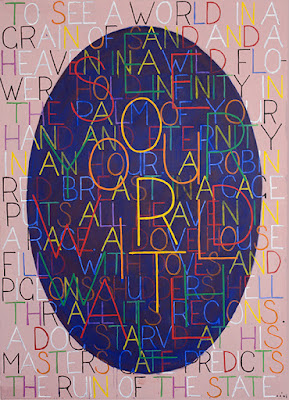 The literary content shouldn't be dismissed, or undercut by the visual properties of the letters, as evidenced by Nettles’ own Artist Statement on his series:

The Charlie Hebdo attack on January 7, 2015, marked the start of my new work.  I felt a strong need to turn this attack on free speech into art.

I extracted the text from a staff editorial in the New York Times, which became the background for studies, drawings, and paintings. The hard news became an abstract artifact of an era. Transforming the text gave the words new power and, by extension, gave my paintings layered meaning. This was my first experience using text both as the background and subject of a painting.

Next, I turned to Greek mythologies for further inspiration but found them unsatisfying. The stories were English translations of retold myths and not original. The writing lacked the sense of immediacy I was seeking.

It was then a natural step to the Book of Genesis. Even though it is also an English translation, the language of the King James version is very powerful.  I was taught as a child that this is the word of God. I heard these scriptures, repeatedly, in church and Bible School throughout my early childhood, and the words still ring in my ears today.

When I started incorporating Genesis in my paintings, it was like discovering a gold mine. Then Shakespeare came along, and I was swept away.

After the Charlie Hebdo attack, my mood was very dark. Shakespeare provided a home for that darkness as well as a window for great beauty. As poetry became more important in my life, I saw more possibilities for paintings.

When text is transposed to canvas, it becomes beautiful in an entirely new way. Instead of reading it one word at a time in black type, you take it all in at once, with color, shape, and form. It enters your brain and your heart by another avenue. On canvas, it becomes a monument to treasure, instead of paper to recycle.

Classic writings of others have become my own. On canvas and freed from their dusty, historic bindings, they now speak in new ways. And they are mine, yours, and everyone else’s who reads them as they hang on walls. Isn’t that what free speech really means? 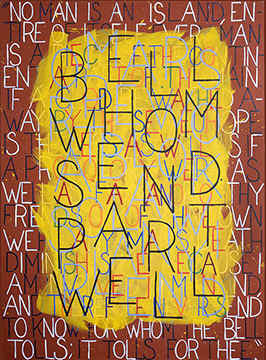 It’s apt to end my review with John Donne—no man (sic) is an island. Nettles shows in his painting how letters cannot exist without its shapes, and that reading cannot happen without seeing.  In “Broken Verse,” Nettles offers a deep understanding of the inseparability of the literal and visual. These works being paintings, it’s also apt to call them lovely.