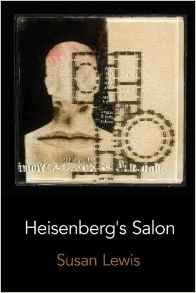 The nature of the titles reflect one of the strengths of Susan Lewis’ Heisenberg’s Salon: they are conceptual, versus relating to objects, places, etc. (Not that the names of objects and places can’t be(come) conceptual, but I digress…)  So we have titles like “Reckoning,” “Disillusionment,” “The Complexity,” “A Sense of Community,” and so on.

The conceptual aspects of the titles highlight a particular deftness to these poems. The poems could be definitional for the titles, as is often the case for any text following a title. But Lewis’ works aren’t normative—this leads to poetry. So this leads to such examples as 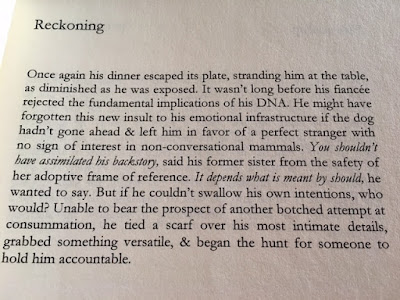 , a journey from the dinner table to “the hunt for someone to hold him accountable” whose oddness, unpredictability and multiple turns within a single paragraph compel admiration. 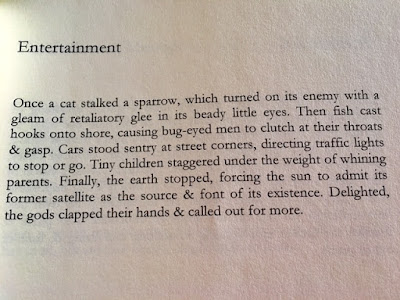 which reminds—and, sadly, it’s an ever-timely reminder—that if there are gods, gods are cruel. Surely those gods have been laughing particularly hard over January 2017…

Nonetheless, as soon as I made that conclusion about the titles (as such applied in the first 30 pages and I was writing a review as I was reading the book), the exceptions arise. For example, there's the  title poem “Heisenberg’s Salon” which obviously relates to, um, a salon—perhaps (the object and place of) a room. But such, too, is the nature of Poetry: it’s a slippery beast. As soon as you think up a conclusion, Poetry contradicts. Yet, this also is where Lewis’ strengths of originality and imagination arise. For example, here is “Heisenberg Salon” 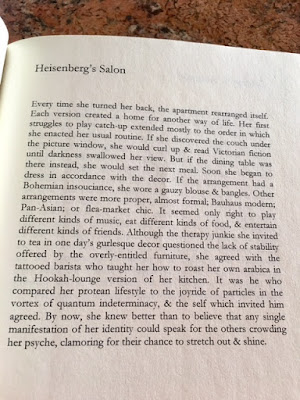 and, as befitting Heisenberg’s uncertainty principle, it presents (1) how context determines what is to happen and (2) where the metaphor for context, an apartment, rearranges itself every time the poem’s “she” turned her back. What’s intriguing—and both fun and funny—about this poem’s notions is how the poem’s “she” might be the only person in a room and yet “she” in her multiplicities thus can conduct a salon—per another definition of salon being a gathering. I do this a lot, by the way, hence my empathy with its notion—that is, I’m a mountain hermit and I talk to myself a lot (though I’m not as witty as these poems) … but, okay, I digress again…

There are also several series of poems, that is poems with the same title and just numbered to differentiated among themselves, e.g. “After Months” has three versions, “The Young Man” has four versions, “Pathetic Fallacy” has four versions, among others. It’s a welcome approach for showing the diversity and resulting wit of Lewis’ mind. For example, compare the first two entries for “It Was the Year” (which was prompted by Joanna Fuhrman’s marvelous The Year of Yellow Butterflies blog project). 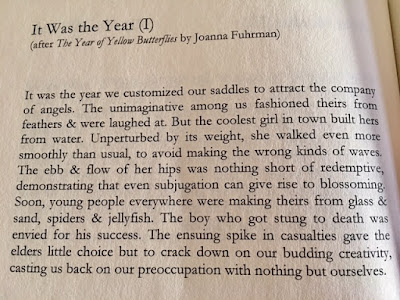 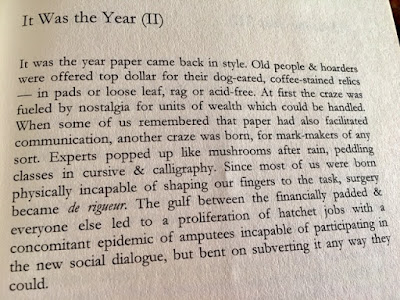 When a poet has a wide expanse and is keenly attuned to the slyness of language, the combination can generate a great read—such, is what Susan Lewis has accomplished.

Eileen Tabios does not let her books be reviewed by Galatea Resurrects because she's its editor (the exception would be books that focus on other poets as well).  She is pleased, though, to point you elsewhere to recent reviews of her work: THE OPPOSITE OF CLAUSTROPHOBIA was reviewed by Alan Baker for Leafe Press' LITTER and by Valerie Morton for The Poetry Shed; I FORGOT ARS POETICA was reviewed by Valerie Morton for Leafe Press' LITTER; and AMNESIA: Somebody's Memoir was reviewed by two Amazon Hall of Fame Reviewers: by Kevin Killian and by Grady Harp. She released three books and two chaps in 2016, and is scheduled to release a similar number in 2017. More info at http://eileenrtabios.com