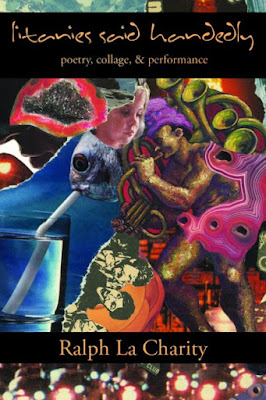 The mystery of Ralph La Charity: Is he a poetic artist or an artistic poet? The answer is contained in the very title (and, of course, in the contents) of his latest book Litanies Said Handedly: Poetry, Collage & Performance.  The subtitle indicates his triple threat -- poetry, photo collages and performances. What is a reader to make all of these approaches? Is there a thread through these different media? Indeed there is. In one sense, this book is a manifestation of a modern bardic tradition. For La Charity’s theme is word music. He tells us as much in his Dedication, Acknowledgments, and Prefatory Notations which open the book. Poetry is a word collage. Poetry is a performative art acted out in bars, bookstores, and coffee houses. Poetry is words, associations, languages, and “sound as raiment.”  La Charity is a poetic artist and a performative one at that.

La Charity fits into the bardic tradition that traces itself not so much to Homer or to the troubadours but directly to the Beats like Bob Kaufman and to Ed Dorn and fellow music- infused and infatuated poets like Kamau Daáood and Julio Cortazar. For these poets, narrative storyline is secondary to the images, associations, and reference; secondary to the musical sounds of the words, and to the artistic spirit generated by their poetry.

La Charity reinforces his poetic message with his collages that ask us to imagine as well as contemplate. His collages reference other artists and styles perhaps most notably the Dada/Surrealist Man Ray.  He also references Jess Collins, a Beat collaborator himself, whose work is suffused with images of people.  In La Charity’s images, people are as much observers of the viewers as they are intended to be observed.  Consider the two figures in the lower left corner of “daily deuce” staring at all the other action in the picture or the figures in the upper right corner of “piano alley” and in the center of “Lounge Dragon” staring right at you.

And wherever there are collages music is not far behind. Look for the pianos. Is that Thelonious Monk in his porkpie hat? Music references are also in the poems. Is that a reference to Crosby, Stills and Nash in The One Great Lesson? Or to a standard from the American songbook in Kiss of the Ghost Breeze?

Litanies is composed in three parts as well as in three media. In Part I, La Charity is quite explicit about the music and magic of poetry rather than about the necessity of a meaning.

Here is as good an example as any of La Charity’s word music in the first four lines from his sonnet Purchase Guaranteed.

Consider also the first four lines for another sonnet Of Willful Purchase:

These poems can be read as grand invitations; invitations not to decipher what the words mean rather invitations inviting us to luxuriate in the images that they generate.  These are poems to be heard.  At the end of the book readers are directed to YouTube performances of the master.
Having said that La Charity’s poetry prefers the aural sensation of words rather than didactic meaning is not to say that his poetry lacks meaningful punch. On the Nod, for example, will not be embraced by the political right as it exposes some of the modern depredations that we accept through denial.
Part II is the travel part of the book and it opens with collages that start with India and end at the Blue Note in New York City. The poems here travel not only to place but to word and music as well. They travel from jazz to chant and from neologisms to colloquialisms and to references to Trane and Bird and Rashaan. And, along the way, we are entertained with a hipster blues story in Jesse’s Bell that ends with some cat getting his throat cut. Apparently, jazz clubs (and Irish bars see The Horror of Her Era’s Borrowed Brogue Burrowing) can be dangerous places.  His poems also travel from Ozymandias-like word exercises in ATTLE CHEE ATTLEE/CHEE ATTLE CHEE QUA and 16thal y RUPANDEMONIC to love poems (of sorts) such as ROAD RAPTURE I and Ellie in Hot Pants to a Whitman-like America in A Habit About.

Part III contains poems of lamentation and homage. The collages that introduce the section are sensuous, mysterious, and, not unlike the others, psychedelic. The poems recall moments, people, and memories. They remind us of the evanescence and significance of it all. These moments are honored, for example, in Song of Mourning and Celebration.

Litanies closes with Appendices that are as much prose poems as they are instructions to the reader. For in these appendices La Charity reveals his ars poetica. Poetry is about performance. Poetry is about play. Poetry reading is art; and art in which the reader/listener is invited to be part of the performance. More importantly, however, they are Ralph La Charity’s manifesto:

To internalize the poem that one can give it back
orally with the sound of surprise, as if the poem were
coming off the tongue with the same dyna-compaction
that was present in the original solitary silent act of
composition . . .
(from Post-Predeterminate Technique: The Simultaneity of Its Maintenance and Abandonment).

After reading Litanies, then, we can conclude where we began. In his Dedication he writes “These poetics descend in a rush, tripping off the tongue, resonant / to the blind who will, unaccompanied, / sing." This book of poetry, collage, and performance is less about meaning than about sound; less about reading than about the singing; and less about prosody than about the song.  It is music and Ralph La Charity is its composer.

Joseph Tomain is Dean Emeritus and the Wilbert & Helen Zeigler Professor of Law at the University of Cincinnati College Law.