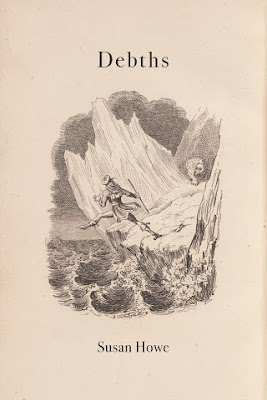 We are perhaps as much as we’ve ever been or will be in a Susan Howe moment. Bringing with it the inevitable reductionism. Nicole Lamy, writing as Dear Match Book in the New York Times, recommends Debths: “lyrical mysteries and familiar things — plants and flowers or art and classical literature — seen in new light.” Dan Chiasson, in The New Yorker concludes “The lesson of these poems, equal parts consoling and devastating, is simple: we’re history.” Say what? Really? As Howe writes in My Emily Dickinson: “Perception of an object means loosing and losing it. Quests end in failure, no victory and sham questor. One answer undoes another….”

As the reductiveness of Lamy and Chiasson’s reviews demonstrates, the language with which we usually talk about poetry doesn’t work here. Luckily I don’t want to talk about these pieces. Instead, I want to look at them. (For a more straightforward review, see Stephen Collis’ excellent http://bostonreview.net/poetry/stephen-collis-curating-resurrection.)

Here in its entirety is a piece from the first section of Debths, Titian Air Vent:

Peter Rugg with child, horse, and open chair. “Is this the

This poem breaks my heart. Without knowing the referents it would break my heart. But since the referents, whether we know them or not, are the structure, I will try to reconstruct them.

I don’t know where Howe found “Eme ede ege edu elu”. Elu, as my husband who has translated Gilgamesh told me, is a Babylonian word for God (cf. the Hebrew elohim). I did a Google search and  found the five words (if that is what they are) of the first line or is it a title scattered in a table of the “names of God of 3 letters” (all beginning with the letter e) in Ken Nunoo’s The Trinity of Lights, a self-published “practical mathematical approach to spiritualism… Hebrew spiritualism is merged with African spiritualism and mathematics…”.  I don’t know if that is Howe’s source.

Howe’s foreword tells us that Peter Rugg is a literary folk character from a short story by William Austin, doomed to wander forever with his small child searching for Boston.

(An aside on the foreword: it is a meticulous wide-ranging piece of prose, combining personal memory and exploration of Howe’s many literary and historical obsessions. It can easily stand alone, but in context provides ballast  — references and hints of technique — for example, Bing Crosby’s song Little Sir Echo  — for the rest of Debths, but it does not tell us everything. For example, in the piece looked at here, it only gives us Peter Rugg.)

“Eye piece, prism, Euryscope, Platiscope” is a list of camera parts, the latter two being specialized lenses of the late 19th century.

Names of God. Doomed father and hence, necessarily, daughter. Camera parts. Each thing illuminating the others. You don’t have to know where the light is coming from to perceive it. In general, this is how Titian Air Vent proceeds, shards illuminating each other, some known to the reader (in particular, those mentioned in the introduction), others not. No matter.

The second section, Tom Tit Tot, was first commissioned as an art exhibit of letterpress prints. A perceptive review (from which I stole the My Emily Dickinson quote) of the 2013 exhibit can be found at http://yaleunion.org/susan-howe/ (the author might be Edward Foster; attribution isn’t clear). The link has the added bonus of a mid-1990’s interview of Howe by Lynn Keller. From the exhibit came a complex meticulous letterpress publication, reviewed by W. Scott Howard:  https://dulibraries.wordpress.com/2015/08/05/tangible-things-out-of-a-stark-oblivion-spellbinding-tom-tit-tot/. The letterpress publication in turn became the second section in Debths, but without the illustrations, and only a flat copy of the letterpress, not the letterpress itself. This section is, as Howard says, “splicing of typesets” from innumerable sources, including and especially Edward Clodd’s 1898 Tom Tit Tot: An Essay on Savage Philosophy (Tom Tit Tot is a variant of Rumpelstiltskin; traces of Clodd’s book appear in all sections). In the dedicated letterpress volume the sources are acknowledged. In this volume they are not. This section is, as the Yale Union review of the original art exhibit puts it, “structured the way a piece of glass is when dropped from a great height.” A sample: 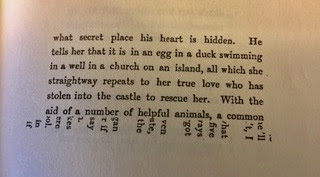 The upper passage is a direct quote from Clodd’s book (Google quickly found this). But if you look at this passage in Clodd (easily accessible online), it is flat and lacks power. Howe restores the power. And then, underneath, rotated by 90 degrees, she puts a narrow vertical slice of some text (what text?) where parts of letters, parts of words, are missing.

A few pages earlier, Howe’s technique proclaims itself in what seems to be a slice from another work(s) (from what source?): “A document, the parasitic/nvolve a structure of layer/age placed on top of anoth/om its other, as if to infinit.” Followed by a slice of a list of numbers, rotated sideways. Followed by right-side up: “PORTABLE OCEAN” (the title of a work by the artist Paul Thek, whose retrospective Diver at the Gardner Museum is a major thread in this book as is the Gardner Museum itself). Followed by another sideways rotated slice of numbers (or is PORTABLE OCEAN pasted on top of a single list?)

As Howe says in the Keller interview, about her earlier work: “First I would type some lines. Then cut them apart. Paste one on top of another, move them around until they looked right. Then I’d xerox that version, getting several copies, and then cut and paste again until I had it right. The getting it right has to do with how it’s structured on the page as well as how it sounds—this is the meaning. I suppose the real answer to your question ‘Did you stop doing any visual art?’ is ‘No.’ I’m still doing it, but I’m doing it on pages with words.”

In the third section, Periscope, we are back to standard type. Poems recognizable as poems. References not so much quoted or named as absorbed, the poems more personal (or perhaps only seeming so).

Come lie down on my shadow

I sold your shadow for you too

Dust to dust we barely reach.

The fourth and last section is Debths, which, as Howe says in her introduction, is, with Tom Tit Tot, “collaged essays on the last poems of William Butler Yeats, the poet I loved first.”

More than collaged. Slashed, crumpled, obscured, shattered. In the sample above some traces are visible: “dwarf will there await the countess who shall” (appearing and then, after a gap, echoed); “stood an ancient fir-tree, it is bargained that the” — these again are from Clodd (thank you, Dr. Google, who successfully searched a part allowing me to restore the whole, for example, fir.). The rest is for us to surrender to; not simply suggestive, but more suggestive than suggestive would suggest.

[And by cropping, by losing the white space in which it floats, I have effectively destroyed this piece. One medium to another, transformed or lost.]

Finally, a quote from the Keller interview that illuminates the obsessive power Howe’s works have: “You don’t hear voices, but yes, you’re hearing something. You’re hearing something you see. And there’s the mystery of the eye-hand connection: when it’s your work, it’s your hand writing. Your hand is receiving orders from somewhere. Yes, it could be your brain, your superego giving orders; on the other hand, they are orders. I guess it must seem strange that I say poetry is free when I also say I’m getting orders. It can become very frightening. That’s what Melville’s so good on in Pierre and Moby Dick and elsewhere, that once you’re driven onto this hunt, you can’t stop until you’re told to stop.”