VENTURE OF THE INFINITE MAN by PABLO NERUDA 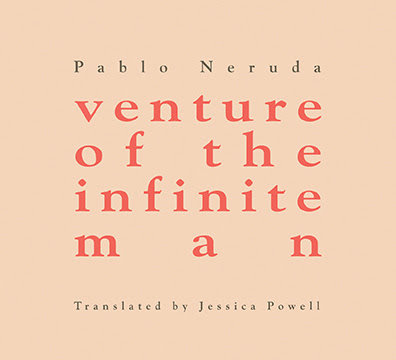 I’ve long thought it unfortunate—and ironic—that there’s sometimes a split among poetry lovers readers as regards traditional or lyric forms of poetry  versus experimental forms. Notice that I struck-through “lovers” in that prior sentence to replace it with “readers”—that’s because I feel that a true lover of poetry should accept the varied ways through which poetry unfolds.

With that, I praise the just-released—historic release—of Pablo Neruda’s venture of the infinite man, translated by Jessica Powell. It is the first English translation of Neruda’s third book of poetry. That it is the first English translation surprises me—actually, it’s appalling—given Neruda’s fame and achievements. As Neruda himself said about it, venture of the infinite man is “one of the most important books of my poetry.”

The reasons for it being overlooked do not seem disputed: it’s a radical stylistic departure from his prior book, the much beloved Twenty Love Poems. venture of the infinite man was an experiment where, to quote from the publisher City Lights as it’s convenient to do so, “Neruda discarded rhyme, meter, punctuation and capitalization in an attempt to better capture the voice of the subconscious.” (This recalls for me, by the way, how, in an interview for my book BLACK LIGHTNING, Arthur Sze said he forgoes capitalizations in writing first drafts of poems so as not to interrupt the poems’ flow.) venture of the infinite man is presented as by its publisher as an example of a poet’s creative and intellectual development, bridging the aching, plain lyricism of Love Poems, and the unique hermeticism of Neruda’s next book, the landmark Residence on Earth.

Neruda’s distilled lyricism is still evident, e.g. this excerpt chosen by opening the book at random

But you also get in venture  of the infinite man Neruda’s experiments in trying to renew his poetic efforts—as described on the first page of Mark Eisner’s excellent Introduction: 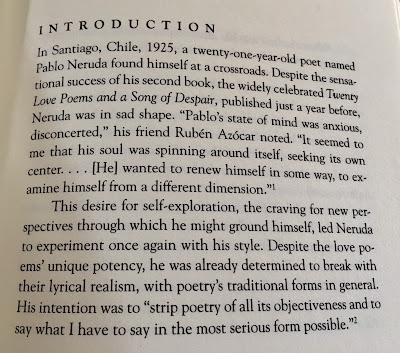 Really, it’s sad how those who feel Poetry can only be a certain way cast venture of the infinite man out of favor. Catch up then, Poetry Lover, in your reading by checking out this book which was so important to Neruda himself. City Light’s edition is wonderfully designed and also provides the service of offering the poem in its original Spanish. RECOMMENDED!


Eileen Tabios is the editor of Galatea Resurrects. Her 2017 poetry releases include four books, two booklets and six poetry chaps. Most recently, she released MANHATTAN: An Archaeology (Paloma Press, U.S.A.), Love in a Time of Belligerence (Editions du Cygne/SWAN World, France), and THE OPPOSITE OF CLAUSTROPHOBIA: Prime's Anti-Autobiography (The Knives Forks Spoons Press, U.K.). Her books have been released in nine countries and cyberspace. Her writing and editing works have received recognition through awards, grants and residencies. More info about her work at http://eileenrtabios.com